With the help of his subscribers and the National Arbor Day Foundation, Mr. Beast is planting 20 million trees by 2020. 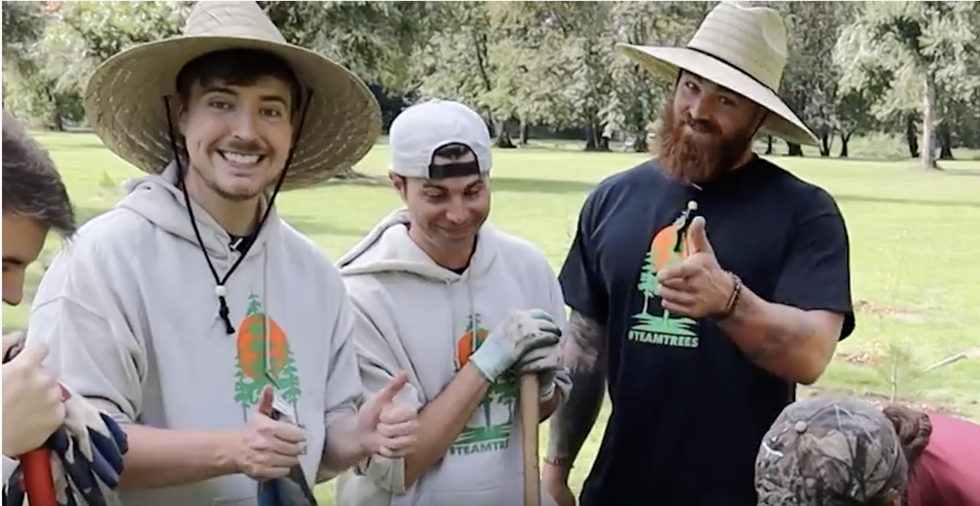 Jimmy Donaldson, otherwise known as Mr. Beast, recently hit twenty-five million subscribers on YouTube and celebrated his milestone by partnering with the Arbor Day Foundation to create the #teamtrees campaign. In his video, Mr. Beast admits that he's not been the most environmentally friendly person over the last couple of years, but that he wants to stand up against retweet activism and do something to help. He started by planting 100,000 trees with the help of his friends, and some lucky subscribers but soon unveiled that his goal was much bigger.

Because it would be quite impossible for Donaldson to plant 20 million trees by hand himself, he created teamtrees.org, where anyone can go and donate. For every single dollar donated the Arbor Day Foundation will plant one tree. So even a small donation of $5.00 would add five new trees to Earth. Elon Musk just recently donated $1,000,000, and as of March 3rd at 12:52 p.m. CST, #teamtrees has received over $21,759,645 in donations, which is 21,759,645 trees planted!

By January 1st, 2020, Mr. Beast and teamtrees.org had officially planted 20,000,000 million trees around the world and succeded in their mission. In just four months, Mr. Beast planned, proposed, and started a movement with the help of the Arbor Day Foundation, all with the outlet of social media and the fanbase he has acquired over the years. If more influencers took a stand like Mr. Beast and used their positions to help better the environment, where would we be now? If it only takes four months to plant 20 mill trees, think of all the countless actions we could spark to create a real change on Earth.

Trees provide so many benefits to humans, animals, and the environment. Just one tree can be home to as many as 500 different species, and as the rates of deforestation continue to increase, many species are becoming critically endangered or have gone extinct. So planting 20 million trees is like constructing an entire city for these organisms.

Trees are also proven to provide emotional rejuvenation and can improve your mood by creating a sense of peace. But the effects of trees also stretch to physical benefits: studies have shown that being among trees lowers blood pressure and stress-related hormones.

In relation to helping the global atmosphere, one tree can absorb enough carbon dioxide to support two humans, and, as you probably learned in elementary school, they create oxygen through photosynthesis. They also trap dust, pollen, smoke, and smog in their canopies, acting as a physical filter and deterring toxic ash from entering the atmosphere.

What is particularly amazing about this campaign is the way it started. Content creators on YouTube are watched by billions of people every day, from all around the world. Creators like Mr. Beast can use their influence over everyday people in everyday society to achieve and strive after collaborations that change the world. YouTube really offers a way for people to connect, and all they need is the internet to access it. Spreading positive messages and creating an advocating campaign is a great way to draw attention to our growing environmental problems and call people to action.

Watch Mr. Beast's video here! And keep up with the tree count here!