My Second Year Of College Already Tops My First

My Second Year Of College Already Tops My First 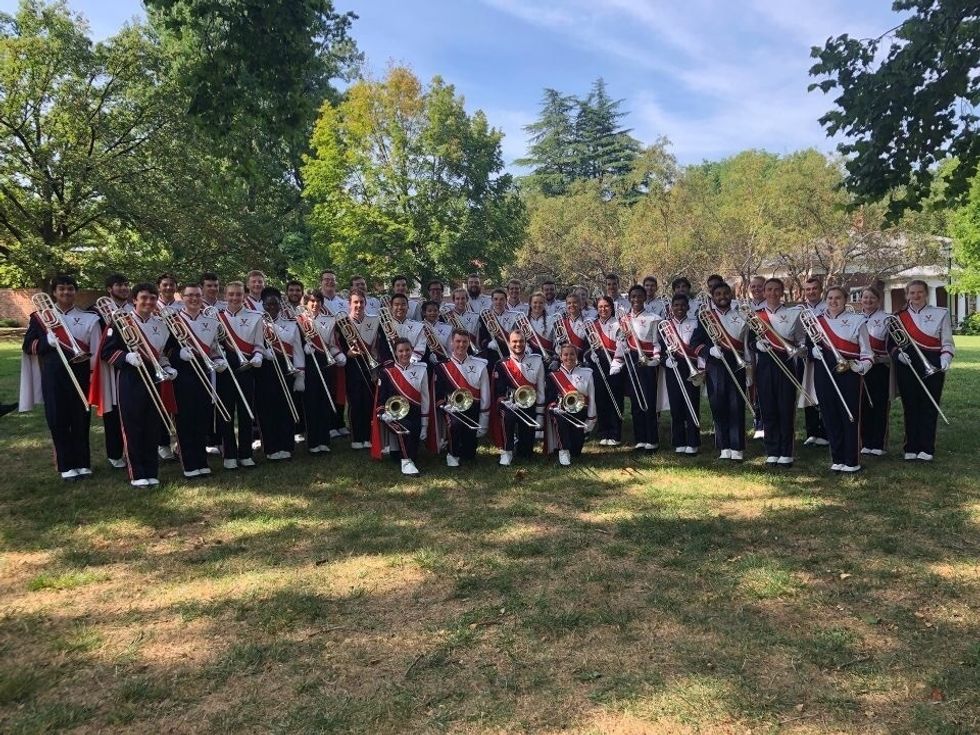 If you've read my first article about living in a single my first year, you know that while I made some cherished memories and even met my best friend, I had a habit of keeping myself isolated from a lot of the outside world just simply due to convenience. Well, I am happy to announce that not only am I living in a double this year *pausing for a chuckle,* I succumbed to a longing that's been wedged deeply and firmly in the back of my head since the very first Virginia football game last year. I joined the marching band.

Marching band was one of my biggest passions in high school, so not joining my first year was quite a tough decision. I had ended up deciding that instead of charging full speed ahead into all of my passions that I was longing to explore, I would ease into college life (as many people had suggested to me) in order to hopefully counteract overloading myself with responsibilities while still adjusting to this new environment and the responsibilities that came with it in itself. Welp, first year is now over, and I decided I'm ready to dive in to the big one, because sitting on the sidelines and shouting along to all of my favorite stand tunes just wasn't cutting it. And surprise, I'm pretty confident that this is the (by a long shot) best decision I've made since arriving at the University of Virginia.

When I arrived on grounds again this summer for the first time since my informal "audition" for band, AKA the commencement of band camp, I was sweating in my seat, I was so nervous. I was worried that I was forgetting something, about the fact that I was the only girl and the only second year of the group of 14 new trombones and I might not fit in, and not to mention how I hadn't played regularly for over a year, and as a result everyone would undoubtedly be bounds ahead of me in playing. However, these fears were quickly cast aside as soon as I walked up the steps to the band building. There, I was met with huge smiles from a couple of upperclassmen (who already knew exactly who I was) all wearing matching UVA marching band tees. After a super brief introduction, I was ushered into huge room full of rustling orange shirts which immediately became still, just as their owners fell quiet as the boy I met outside put his fist in the air, requesting the stop of the music playing and indicating the arrival of a new member. He then introduced me to the entire room as a first year in the band, and everything that came immediately after is all part of a fast, exciting blur. I remember running through the ablaze tunnel crowd that was once so still and quiet, receiving high fives from all around, and being guided through the rest of the hub of a building by who I would soon come to know as one of my beloved section leaders.

Never have I once automatically felt so welcomed into a new environment or organization (even counting orientation and other welcome days!). Right off the bat I was met with such open arms (literally) by people who I genuinely knew were so excited to have more new members joining into the band, and this feeling of welcoming and community only grew stronger and stronger over the course of that first week. After all of the rough rehearsal blocks, we spent every meal together (even going to get food AFTER practice because we apparently can't stay away from each other), and bonded through intense games of quiplash, look up look down, and pretty much every card game you can imagine. Whenever one of us needed help with something in music or drill, there was always a line of people offering advice and words of wisdom, and in turn giving positive feedback when an improvement was noticed and thus another goal met. That week was absolutely full of amazing surprises, not to mention the sly move the section leaders made in bringing all of the first years in band our favorite milkshakes after a particularly heavy day of fieldwork when they had used "favorite milkshake flavor" as an icebreaker the day before. After camp, we even had a HARRY POTTER MOVIE NIGHT (seriously, who was writing all of my favorite things down??).

I found out on the first day of band that while I was the only "1st year" girl trombone, I would be one of 11 girls in the entire 45 person section, a demographic I was not at all expecting. This being said, just after the first week of band camp, I genuinely feel that regardless of gender or year or position in the band, I can come to any of these people with any issue and I would wholeheartedly be met with care, compassion, and understanding. I mean, we have seen each other at some pretty real lows already, band having only yet taken place in the blistering heat of August and early September. I have witnessed my fellow classmates drinking the "cav cup" (you don't want to know) and will forever have their subsequent pained expressions ingrained in my head. As a collective, we have struggled, but we have also been there for each other when the dust settles. I mean, I've already had to massage a very sweaty Chris' back no fewer than five times, I better be getting at least some consideration!

My whole first year I spent looking for where I belonged at UVA. I know now I've finally found my home.