Ten reasons why Ariel is a feminist. 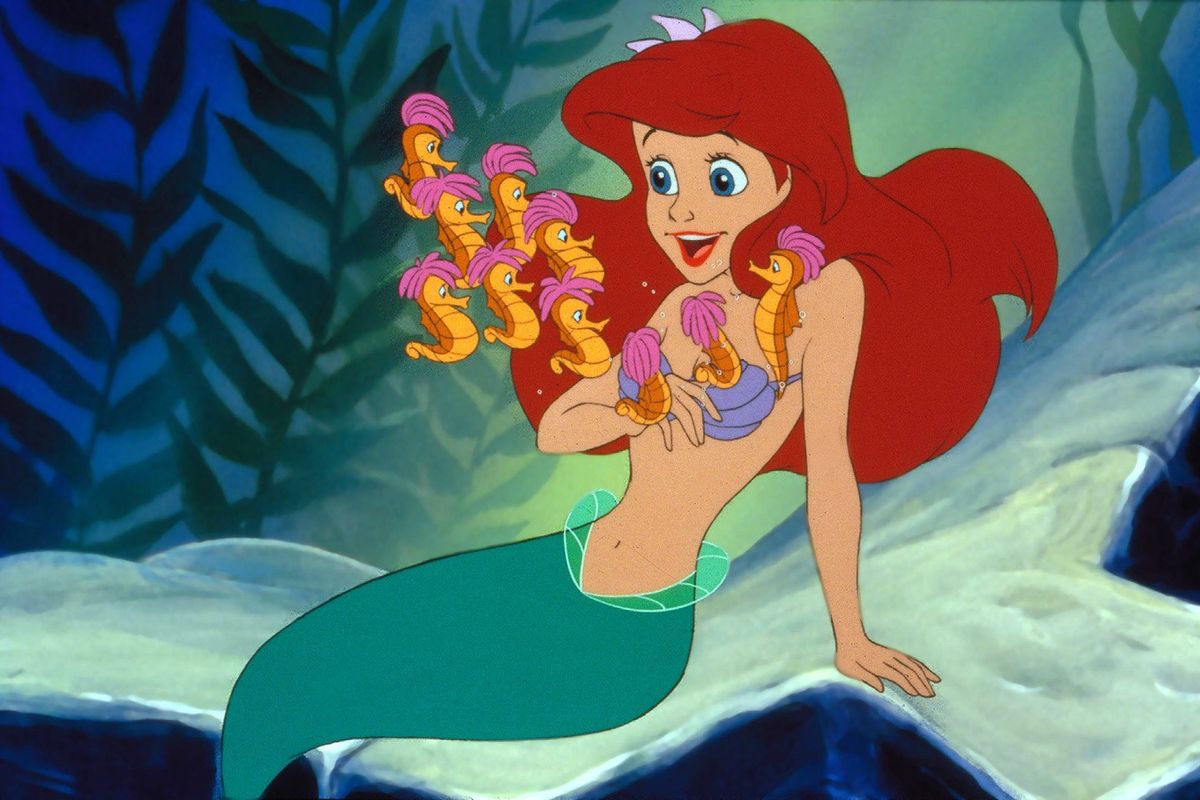 "The Little Mermaid" is one of the best movies and it does indeed promote feminism. Due to the fact that I am a feminist myself, I am more than happy to share the reasons why this Disney Princess is quite the opposite of what the audience thinks. There have been many claims that she is "anti-feminist" due to the fact that she gives up her voice for a man yet the points below will show you that Ariel is way more of a feminist than you think.


1. Ariel has an insane amount of confidence.

Even though Ariel doesn't have a voice, she doesn't change who she is one bit even being in an unfamiliar world. She makes everything her own and stands up for herself in many ways that don't require her to have a voice. Even though the mermaid is out of her element, she doesn't try to blend in or take away from her outgoing personality.

With Ariel being comfortable in her own skin, or new legs as you may put it, she sets a role model for young women to show that no matter what you go through, you don't have to change yourself fully to fit in.

Most "Little Mermaid" anti-feminists say that the main reason why this movie doesn't promote feminism is due to the fact that she gives up her voice for a man. Eric himself was not the reason why she went on land, he just gave her another motive to do so herself.

The movie does indeed show a clear understanding that Ariel has been hooked on going on land way before she even met Eric.

3. She isn't afraid to stand up for herself and her beliefs.

Ariel stands up for herself in many ways, even against her father. King Triton is the leader of the sea but that doesn't stop Ariel from going against his ways to get what she wants. She is a restless undersea princess that doesn't necessarily follow the rules. This may show King Triton that she isn't mature enough to do things on her own but her curiosity, adventure, and drive prove him wrong.

Ariel teaches young girls that you should promote what you believe in at a young age and always chase after your dreams.

4. She owns her mistakes.

Ariel indeed does screw up a few times, but she admits to it. This shows many females that it is okay to make mistakes, as long as you take a stance to them. This is an important trait to have because everyone makes mistakes yet not everyone can man-up to them.

When the deal fails with Ursula, Ariel finds a way to defeat her and save her father while doing so. She then continues to make things right with her dad after the fight, showing women that it is socially acceptable to not be perfect 24/7.

"The Little Mermaid" was the first Disney princess movie where the princess does the rescuing. When Ariel gets separated from her friends and sees the ship in flames, she goes in alone to defend her morals as a feminist by saving a man.

Feminism is all about equality, not that one gender is better than the other. Even though feminism started in 1848, it wasn't really shown through Disney movies, yet Ariel breaks through and shows the world than men and women are equal by being the first ever Disney princess to save the prince.

6. During Ursula's "Poor Unfortunate Souls," she brings up men's views on women.

"The men up there don’t like a lot of blabber

They think a girl who gossips is a bore

Yes, on land it’s much preferred

For ladies not to say a word"

These song lyrics showed that equality between both genders was a big problem shown very frequently throughout society and how confident women like Ursula still faced the issues that all women today still face.

Even though King Triton destroys all of her treasures and tells her that she can't go above the surface, Ariel find another way to get there sticking with her dreams.

She can't use her voice to win over Eric? She uses her bubbly personality and actions instead.

Ursula messes with her loved ones? Ariel fights back to make things right.

She is someone who doesn't give up easily, and her persistence and hard work finally pay off to complete her happily-ever-after ending.

Ariel does indeed cry, and she shows the world that it is okay to feel sad. She also shows females that you can take a moment to let it all out, but once that is done you need to get up and go fix your problems.

After Triton destroyed her grotto, she took a moment to break down but then took a visit to Ursula and found a way to get what she wanted. This promotes feminism because it shows that no matter what challenges women face, they should always push through in the end to find success.

9. She proves that women don't have to give up everything for a man.

One of Ariel's biggest fears is that she'll lose her family, including her father, if she goes up on land. Ursula than tells her that she'll have her man and life is full of tough decisions. This is a lie because Ariel learns that she can indeed be apart of both worlds and doesn't have to choose. She can live on land with Eric yet still keep close with her family.

"The Little Mermaid" shows viewers how two worlds can unite and that she doesn't have to give up her past life for her future one.

10. Ariel is the first non-human princess.

Disney brought a mermaid to the table showing girls that not all princesses have to be a perfect human to find happiness. Even though she grows legs in the end, she starts off different than the viewers' expectations. This proves the point that it is okay to be different, because that's how we learn about unique experiences and find similarities to celebrate.

Ariel is only 16 years old, yet she shows the world that at such a young age, she can conquer anything. "The Little Mermaid" promotes feminism in many ways other than the ones listed above, and Princess Ariel continues to be a role model to many young women out there.