The Effects Of Texting On Relationships
Odyssey

The Effects Of Texting On Relationships

Adults Spend A Total Of 23 Hours A Week Texting, Sending 67 Text Messages Per Day On Average According To USA Today And Business Insider. What Affects Can This Much Texting Daily Have On Our Relationships? 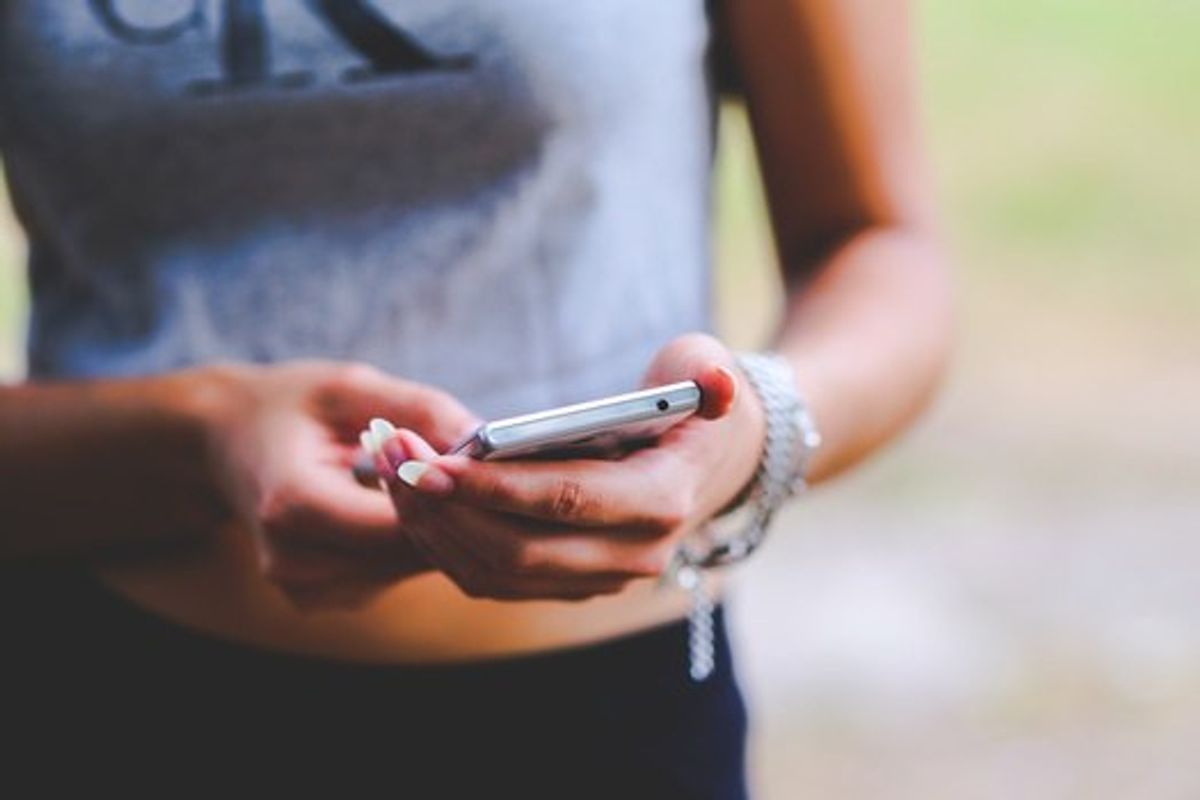 Texting has become a part of daily life in the American culture. People use texting to communicate with friends, keep in touch with family, and talk to significant others. According to the Pew Research Center's Pew 2010 Internet and American Life Project, about 75 percent of 12 to 17-year-olds own cell phones in the United States. 50 percent of these teens send more than 50 text messages per day, while 33 percent send more than 100 messages per day (Blanchard). Can this heavy amount of texting have any major effects on relationships?

In traditional relationships before texting existed, relationships were started by growing up together, meeting in a social setting, getting a cup of coffee, or connecting through friends. If the first impression is successful, then there is a second date, a third, and so on. Today, the majority of relationships start online through dating sites like eHarmony or social media such as Facebook, and continue through text. If this first date is successful, the couple exchanges phone numbers and text or call from time to time to arrange future dates or just stay connected (DiDonato).

An online survey of 982 people at the University of Plymouth showed some major differences between people who prefer to text, and people who prefer to call, and more specifically, how texting affects their relationships (Reid). The study found that overall “Texters” were more likely to feel lonely and socially anxious than “Talkers.” Texters also developed deeper relationships with the person they texted the most, which was expected. Texters reported that texting helped develop new relationships, while also adding another way to communicate that they felt added something new to the relationships they already had (Reid).

One of the most interesting findings of this study was that if a family member to a Texter read his or her text messages, they would be surprised by what they read. This suggests that Texters may live two different lives to a certain extent. They may act one way around their family, and completely different through text messages to friends or relationship partners. The survey also showed that Texters feel more comfortable saying things through text rather than face to face, which allows them to have more personal conversations than they would usually have in person. Overall, the study found that texting is important to a Texters relationships and their way of life, while texting does not have a big impact on callers as a whole (Reid).

A personal study on how texting affects teenager relationships showed that 90.5 percent of teens between the age of 13 and 19 text daily and 85.7 percent felt that texting benefits their relationships. Although the slight majority believed texting had only positive effects on relationships due to convenience and the ability to keep in contact with family and friends. Those who believed texting has at least some negative impacts said that miscommunication and overuse were the biggest problems with texting.

On the other hand, “researchers at Brigham Young University recently found heavy texting to be associated with relationship dissatisfaction among both men and women” (Gregoire). Their study found that when texting is used for what they called “relationship maintenance,” both parties showed dissatisfaction. Relationship maintenance meaning resolving fights and delicate issues such as “where we are in the relationship” conversations that could have major impacts on the relationship. The researchers also found that having in-person conversations interrupted by texting had a negative effect on the emotional connection in a relationship (Gregoire). According to Theresa DiDonato from Psychology Today, in a study looking into the effects of texting on different genders in relationships “the more men text with a partner, the less happy they tend to be, the less happy their romantic partners tend to be, and the more their partners tend to report considering breaking up with them.” The same study found that women who use texting to monitor their relationships were less happy than those who did not (DiDonato).

A recent Intel survey reflected the findings of both of these studies. The survey, based on young people, found that more than 60 percent of all respondents believed they rely on technology, and called it “dehumanizing,” while at the same time 70 percent of the respondents said that technology improves their relationships. This leads to the conclusion that texting and technology are beneficial to relationships as long as they are used correctly, for the right reasons and are not overused (Gregoire).

Aside from relationships involving an intimate partner, texting also affects family relationships. The biggest role of a parent in their child's life is to act as their teacher and guide them through life, helping them deal with all of the new experiences they have yet to be faced with. This way of life can be disrupted by the new advances in technology. In today’s society, teenagers are much more advanced with technology than their parents are. This can make it difficult for some parents to offer advice and properly guide their children through things like the internet, texting, and social media, which can lead to a disconnect between parents and their kids. Children can develop disrespect towards their parents due to the lack of authority that parents have with technology and on the internet (Taylor).

Technology also provides a way for teenagers to be more independent. Since they are more experienced with technology, it is possible to feel a sense of superiority. This feeling of superiority can help contribute to the loss of respect and unwillingness to listen that teenagers may have towards their parents' rules and restrictions. This loss of respect is not all the children’s fault, though. Since technology can take up large amounts of time throughout the day parents often have significantly more free time from their kids throughout the day. When parents do not have to entertain their children anymore they will often find themselves absorbed in some of today’s technology. For example, while children are playing video games, texting their friends or relationship partners or watching YouTube videos, the parents end up using a lot of their free time “talking on their mobile phones, checking email, or watching TV” (Taylor). At this point, technology has created a family divide as each member of the family ends up using technology more often than they spend time with each other (Taylor).

According to Jim Taylor, a writer for Psychology Today, a study looking into how technology affects family relationships found that children were so absorbed in technology that when their working parent got home from work, only 30 percent of children greeted them, while 50 percent completely ignored them. Another study found that “family time” was not affected by technology when used for school, but was affected when used for entertainment purposes. This gives some interesting implications as to how families are spending their time at home. The same source found that the average size of homes has grown by 50 percent in recent years, which provides more space for family members to spread further away from each other if they wanted to. Considering that technology has been found to disrupt family time and relationships, it is reasonable to consider that families do in fact use the extra space of their homes to get away (Taylor).

Overall, texting is both beneficial and harmful to relationships. The benefits being faster communication over long distances, a more private way of communicating, and easier to share information. The negatives being the damage it can cause if used too often or for the wrong reasons, such as talking about relationship changing issues, uncomfortable situations, or as a way to keep tabs on a partner. Family relationships are also damaged and improved by the use of texting. It provides a great and convenient way to communicate with both close and distant family, but also hurts the relationships at home. Phones and computers take up a large majority of a family’s everyday life, which causes them to lose important family time. Phones also can cause a loss of respect from teenagers who are technologically superior to their parents. All of which can cause the family to separate and lose everyday family values.

Caitlin Marie Grimes
University of South Florida
9321
Beyond The States