5 Disney Princesses That Prove That Race Matters, Ariel Is Not On The List — Get Over It

Whether she's black, white, or Asian, she's a fish overall. 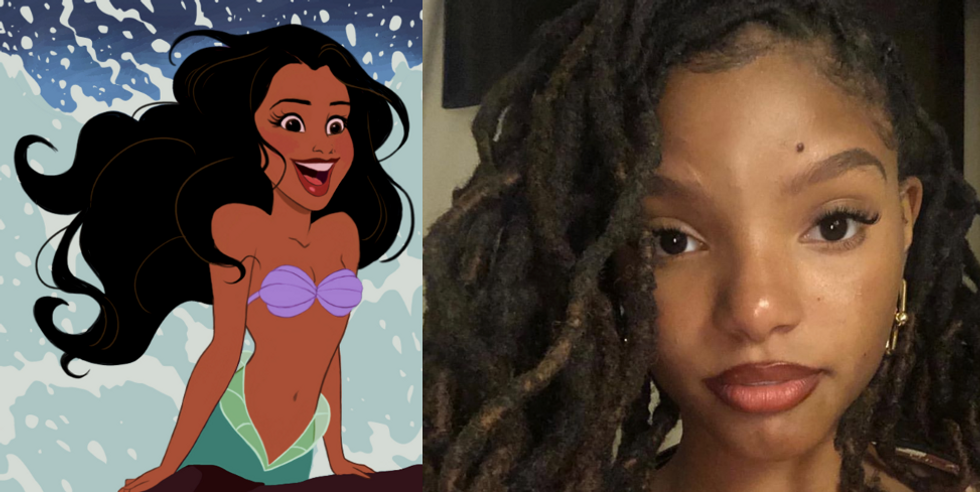 Disney is known for making re-makes of the classic Disney movies, ranging from The Jungle Book to Aladdin to the most recent, The Lion King. On Wednesday, July 3, 2019, Disney announced that they are officially recreating the classic Disney film, "The Little Mermaid." There had been discussion regarding actors/actresses who would be playing the famous roles, such as Melissa McCarthy for Ursula. Yet, nothing was officially set in stone. However, Disney did announce that they had found the perfect person to play our princess. Halle Bailey, known from her girl group Chloe x Halle and for starring on the TV show "Grownish," is going to play the magical voice behind Ariel. The internet was going crazy over the announcement, some good and some bad. Obviously, Halle is an African American woman which differs from the original mermaid tale. Some fans were totally excited about the casting, whereas others were furious that Ariel will now be black.

But, all in all, Ariel is a mermaid. Her race was never really discussed as optional in the original because during that time, Caucasian princesses were all that there was. However, it is 2019 and who says Ariel can't be black? Well, here are 5 princesses that prove that their race is non-negotiable, unlike Ariel.

Mulan is the official eighth Disney princess in the franchise and her story is based on the legend of Hua Mulan. Her story takes place in China, where she doesn't fit into the expectations of the normal Chinese girl. Her story also talks a lot about gender roles since she does pose as a man in the Chinese army. If and when Mulan is remade, picking an actress that is not Chinese, will cause an uproar for the fact that her story is a true story. It is based in China and the whole tale really focuses on the traditions of China. Making her white or another race would just not follow the tale, whatsoever, changing the story entirely.

Jasmine is the sixth Disney princess and her story takes place in the Middle East, some would say India if they had to guess. Aladdin was remade this year and actress, Naomi Scott was to play Jasmine. Naomi Scott was a good fit since she had physical attributes similar to Jasmine, had a great singing voice and comes from Indian descent. Therefore, Disney kept this princess true to her birthplace. Imagine having a white Jasmine in India where she is supposed to be the princess of a Sultan. It just doesn't follow the story or the setting at all.

Tiana is the ninth Disney princess and also the first African American princess. Her story is set in New Orleans, Louisiana. Now, yes, Caucasian people do live in Louisiana. However, according to demographics, African Americans are the majority living in the New Orleans area. In 2019, African Americans made up almost 60% of the total population. Therefore, Tiana represents that majority. Tiana was also the first princess to prove that she was a hardworking woman who, in the beginning, was not searching for her Prince Charming. As a monumental moment in Disney history, changing the first African American princess to Caucasian would just go back on everything the movie stands for.

Pocahontas is the seventh Disney princess and she is also the only Native American princess, to date. Her story is a true story based on the real Pocahontas from history. She is in Virginia before the settlement and runs into Englishmen. The entire story is how the Englishmen were rude to her and her people and removed them from their land. If Disney were to make Pocahontas anything other than Native American, that just goes against actual historical detail and would make the story invalid.

Moana is the newest Disney princess, making her the twelfth in the line-up. She is an original Disney character, not made up from a previous fairy tale or historical event. Moana is also an Islander and comes from Polynesian descent. Because of this, even the voice of Moana is Auli'i Cravalho who is of Hawaiian descent. She, like many others from the list, is the only Islander princess and is the first to make history in that race category. To change her race wouldn't make sense, again, to the setting and therefore, changes the entire story. A white girl can't be the daughter of a Polynesian chief when her story takes place on a secluded island. It just doesn't go with the story or the Islander traditions.

Most of the original Disney princesses are Caucasian for the fact that introducing new races during that time period just didn't happen. Whether it's Cinderella, Sleeping Beauty or now Ariel, her race doesn't play a part in the story. It doesn't have anything to do with the country's history or change the overall storyline. Now, if Merida was a different race, that would go against her storyline because she is the classic representation of a Scottish woman.

It's 2019 and we've now made Hermoine from Harry Potter African American, Mary Jane from Spiderman also African American, so can we just be okay with the fact that we are going to have an amazing and talented woman do Ariel justice? Ariel's a fish, she is still going to be a fish. Her skin color doesn't change who she is.