I Didn't Just March For My Life, I Marched For Those Who Couldn't
Odyssey

I Didn't Just March For My Life, I Marched For Those Who Couldn't

This day will go down in history. 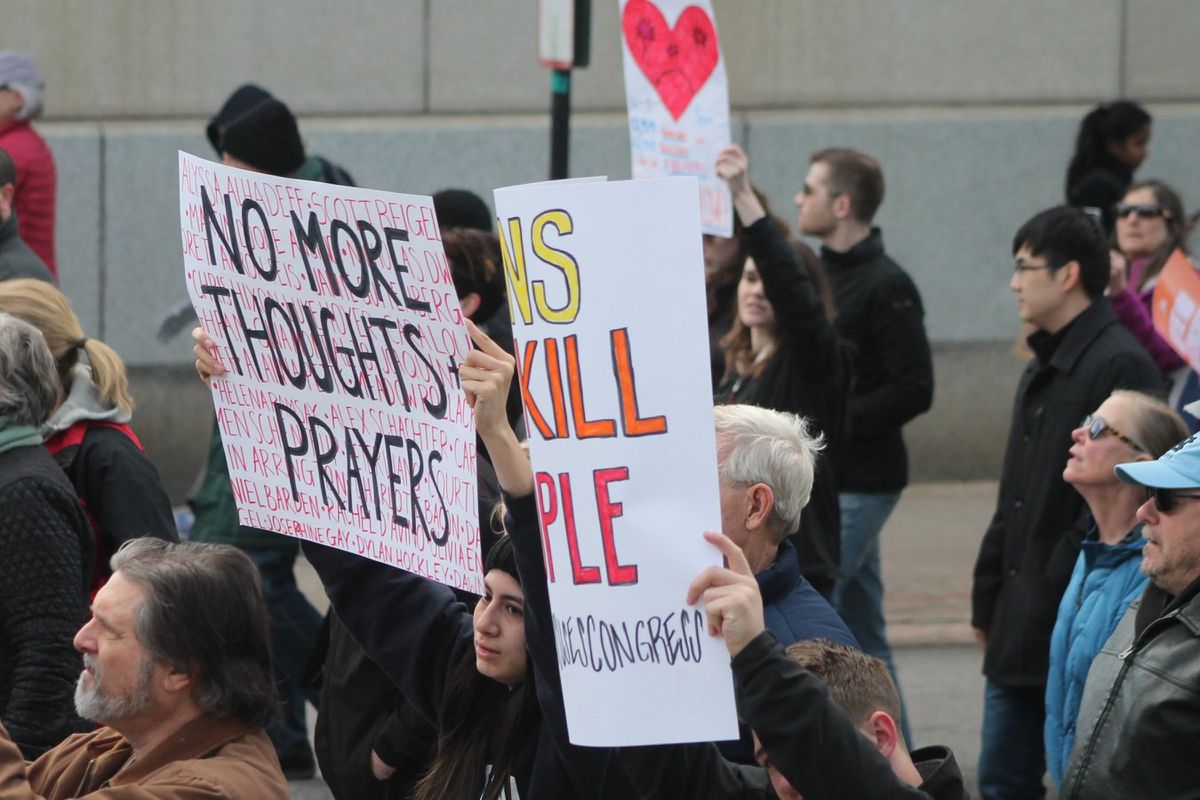 On March 24, 2018, history was made. Across the United States, all 50 states had a March for Our Lives, rallies demanding gun control policies in our country.

When I first heard about the shooting in Parkland, Florida, I reacted how most of us did. With a brief moment of sadness, and expressed something along the lines of, “oh my gosh, that’s terrible. I can’t believe it’s happened again. Maybe something will change now.” The apathy and numbness to something so tragic is ingrained within me whenever something terrible happens, especially when it’s a mass shooting.

Days went by and more coverage of the aftermath of the shooting at Marjory Stoneman Douglas High School aired on the news, finally getting the attention it deserved. The survivors weren’t acting like they have in the past. This time, these students decided to take action and demand change. Within a few weeks, high school students organized walk-outs, protests, and rallies all across the nation. The March for Our Lives came about in no simple or traditional way. This was because of students.

While I wasn’t able to go to the march in Washington D.C., I was able to go to my local one in Raleigh, the state capital. Thousands showed up to Raleigh, clad with their handmade signs. Even though it was cold and with a possibility to rain, no one was going to let the weather prevent them from letting their voices heard.

When I looked at the crowd around me, I saw people of all kinds. I saw babies with big eyes, taking in everything they saw. I saw elementary school students, so proud of their signs. I saw middle school students, a little nervous but all around excited to be there. I saw high school students, determined to make a change. I saw college students, angry and passionate about the state of our nation. I saw parents and adults, heartbroken over what it’s taken to get to this point, yet at the same time hopeful for a real change to be made.

Teenagers across the nation organized these rallies, where thousands, if not millions, of people attended. The rally in Raleigh was organized by two fifteen-year-old students, Lauren Smith and Amber Mitchell. When their parents said they couldn’t go to Washington D.C. for the rally, they took it upon themselves and organized their own rally.

With an array of speakers and performances, the March for Our Lives allowed people to see many different sides of those demanding gun reform. From a middle school student to a group called the “Raging Grannies,” it’s undeniable that everyone can be affected by gun violence.

“One day during the beginning of the year, [my daughter] told me and my wife about a code red drill that she had,” said Aaron Wolff, a survivor from the Virginia Tech shooting in 2007. “She told us that afterwards she went up to her teacher and she said, ‘Don’t worry, when the bad guy comes, I’m going to be very, very brave.’ She’s amazing. But we shouldn’t be asking a five-year-old to be brave like that.”

The reality is that this generation has also been called the mass shooting generation. All the way from kindergarten we’ve practiced our lockdown drills and what to do if a “bad guy” comes into our school. As shootings in school have increased over the years, policies haven’t been put into place to prevent them from happening. The so-called solutions suggested have been geared more toward the potential victims, rather than holding others accountable. Clear backpacks, bulletproof clipboards, arming teachers with guns. Addressing everything but the core issue: there needs to be more gun reform.

“I love those children, and I would give my life for those children,” said Del Lancaster, a local kindergarten teacher. “I am not going to have them come into room after room during their school day with weapons of violence within feet or inches of them. That is not a solution.”

Many criticize President Trump’s idea to arm teachers with guns. Thousands of schools across the country already don’t receive the funding they need to function, like books, tools, computers, and more. Arming teachers is not the way to go. More guns will not solve gun violence.

Students spoke up and made their voices heard in the national discussion about gun violence and gun reform. When you’re a teenager, your voice can get lost and not taken seriously, simply because of your age. Time’s are changing, and we are forcing ourselves into the discussion. Emma Gonzalez, a survivor from the Parkland, Florida shooting, gave a heartbreaking speech about how quickly these shootings can happen. After naming all of the survivors, she stood in the middle of the stage and fell silent for a few minutes. With tears filling her eyes she began speaking again. “Since the time that I came out here it has been 6 minute and 20 seconds. The shooter has seized shooting and will soon abandon his rifle, blend in with the students as they escape, and walk free for an hour before arrest.”

Gun violence demands our attention in this country. People can actually enact change, if enough effort is put in. Look at what some teenagers have done in a couple weeks. People are demanding change and it will happen. The fight is not over, and it won’t be over until sensible gun laws are put in place and the gun violence plaguing this nation is ended.