Two-Party Groupthink Is Hurting America As A Country, As A Community

We are not our parties. 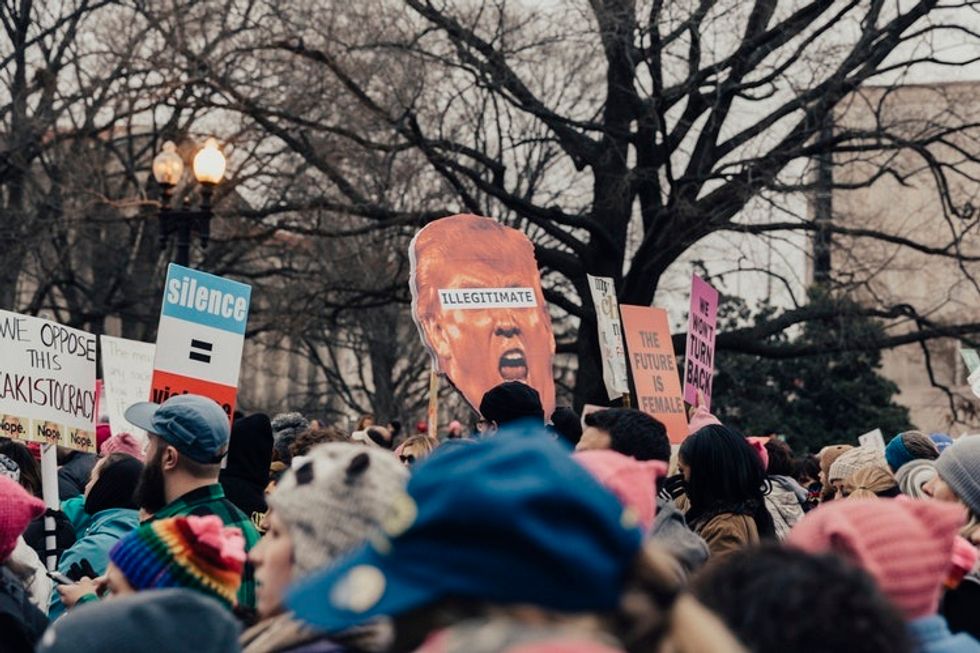 Earlier this year, Former Republican National Committee Chairman Michael Steele went so far as to call out his own political party for its ignorance on his SiriusXM show "Steele & Ungar." "It's the groupthink that has emerged within the party that has now poisoned the national dialogue," Steele said.

While he took a step forward to call out his own political party for its ignorance, why should Democrats ignore their parties political bias and ignorance? Further, why should we even label ourselves with these parties that continuously embody blindness?

I first voted in the 2016 Presidential Election. I registered to vote as soon as I could right after my eighteenth birthday in September of 2016. While I was borderline confused about my options for the presidential election, I realized I barely understood just about every other part of the ballot. So that is when I texted my moderate to liberal dad and asked him who to vote for.

I texted him asking if he could explain just about everything and I eventually Googled majority of the lengthy ballot. I was 18 and even with my high school understanding of politics, skewed by my AP American Government teacher, I had no idea what I was doing.

Brainwashed by the two-party system, I marked next to every single democratic candidate whether I believed their ideas or not. I was suddenly the most biased young American, who was downplayed by society for believing most of what my parents did.

My main reason at the time for only voting for democratic leaders is simply because I have some outrageous fear about gridlock in Congress and I decided to put all my faith in these political candidates I didn't even know. Between filibustering and not getting shit done, I fear for how my congress may not truly be representing the American people, but the American money.

I keep throwing the blame on the parties grid locking and interest groups, but is my gridlocked voting hurting this further? Am I apart of the problem? I am currently in a spiral of questions that most people probably don't even understand or are willing to address.

As someone who registered for the Democratic Party, I am typically downplayed because of a piece of paper with the word Democrat on it.

Apparently, It defines me.

I'm labeled by the Democratic Party and I don't necessarily have the same views as everyone within the party, but honestly, I am not going to dive too deep into that because I know I could receive hatred from both sides.

I'm labelled by the Democratic Party, but I don't personally support abortion. I just think it's constitutional. If you want more information about that look at Roe v. Wade from 1973.

I'm labeled by the Democratic Party and I am the biggest tree hugger, cried watching "Brother Bear," and I drink soy milk. I think that people are oppressed all over the world. I think America's foreign policy that changes with every administration sucks and I would love to open our borders and take all your jobs. I believe that we are harming our planet every second of every day. I also love government welfare (given fairly of course).

OK, Hannah, we get it, you're moderate... and sometimes a liberal hippie... but sometimes extremely conservative with your respect for the Constitution? Then why are you even registered with the democratic party?

I love Obama. I probably love Obama more than your average Joe. And by Joe, I mean Joe Biden.

Obama and Biden as brosgiphy

But in reality, besides Florida being a closed primary, I really have no desire to identify with a party or even the democratic party for that matter because I will listen to anyone's opinion and often find a part to agree with, no matter what party society labels them with.

If you don't label yourself or others, you can ultimately be open-minded.

Others seem to feel differently.

Recently a video of the Bell County High School graduation in Kentucky, where the Valedictorian used a somewhat generic leadership quote in his speech and attributed it to current Republican President Trump, went viral. In the video, the crowd cheered after hearing the attribution to Trump. Then, it took a turn when the valedictorian revealed the quote was from former Democratic President Barack Obama. The crowd fell into a boo.

With almost 80 percent of the counties voters voting for Trump in the 2016 election, this could be understandable. But in the video, they aren't cheering for the meaning of the quote or its impact. They are just cheering for a name- a name associated with their party. They don't even take a moment to consider the goodness of the quote because all they cared about was someone's representation. This is just like how many people will not even listen to someone because they are labeled with a different party even though sometimes they might have an awesome message.

2017 political typology and break down Pew Research Center and NPR

We are drowning in the groupthink created by two parties whose every move we are supposed to follow. We are drowning in the idea of voting within your party. We are drowning as American policies cannot move forward to better our nation because our voting is gridlocked causing our congress to be gridlocked. This inability to live in America with a sense of community and the failure we constantly see in our administrations is exactly what George Washington warned about in his farewell address in 1796.

I don't know if there is ever a way to fix the ills of the two-party system. I just think people like to self-segregate themselves out of convenience. I hope that young Americans can become more in touch with what they actually believe and not just mimic their parents or the party they are affiliated with. We can initiate change and build a greater America if we see ourselves as one community and not as multiple disconnected groups.