Not your conventional English class assignment. 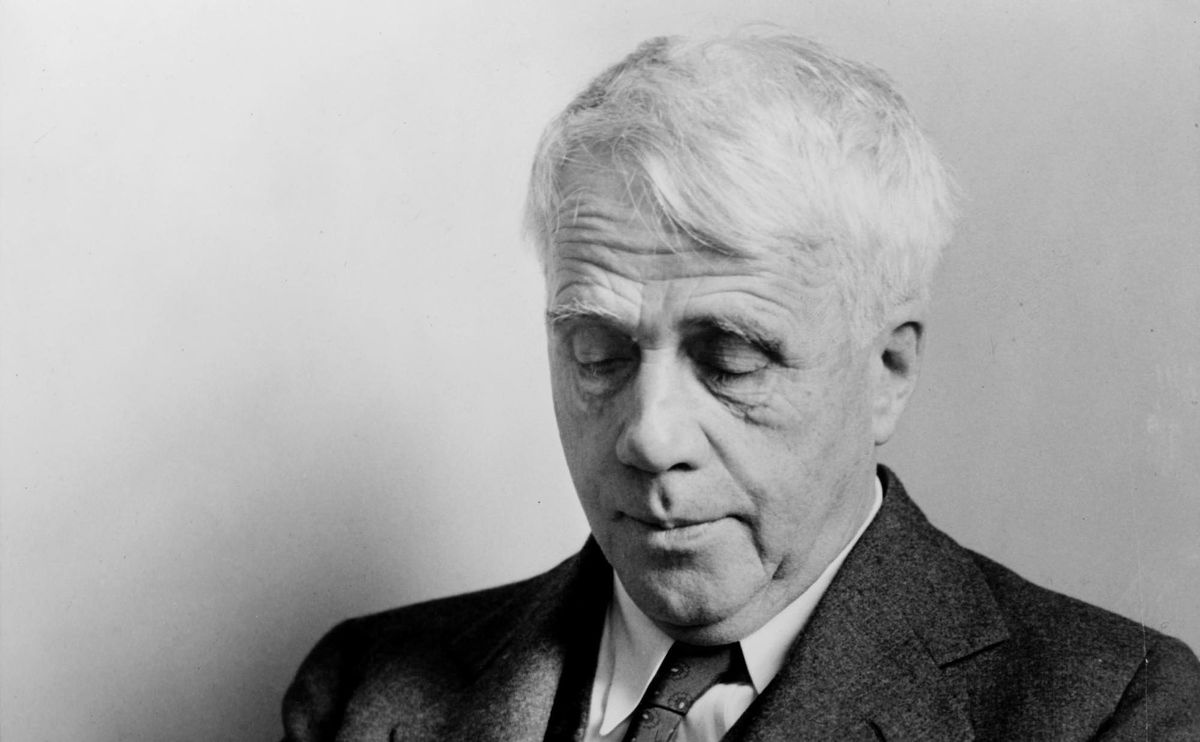 In my English course on Robert Frost this semester, we had only one assignment: an ABCedary on 'my Frost'. We read every book of poems by Frost, as well as his Masques, and a handful of pieces written about Frost and his style of writing.

Frost's personal journal entries made for some of my favorite reading in the class. So, these are excerpts from my ABCedary on who Frost has become to me, the first two of which centralize on notable excerpts on Frost's journal entries.

A final point i want to mention: "if I'd had more time, I would have made it shorter." I learned a great deal on the importance of concise, effective language in this course. And more words doesn't always mean more meaning. I tried to reflect that in my writings.

While reading it, I must slow myself.

“The heart sinks when it is robbed of the chance to see for itself what the poem is all about.”

Grammatical pieces are dismissed, but unmissed:

“…things are not to be too well understood…. Sentencing from all directions.”

In reading it, I must pause.

“The separateness of the parts is as important as the connection (of the parts).”

Sense – and not sense.

“A poem would be no good that hadn’t doors I wouldn’t leave them open though.”

Clarity need not be simple:

“Good writing is self repartee

A poem is triumph of association

A poem is a run of lucky recalls.”

“Take six interjected Ohs and write them in a column. They all look alike but I want them all said differently.”

“A poem is the act of having an idea and how it feels to have an idea.”

I struggle. I reread.

“Since it is not a course or progress in poetry but a circulation among poems.”

His words are not tentative – the pages do not blink. So again I will read. And (perhaps) read better.

“A poem can afford to be misunderstood somewhat if it is going to be a long time here.”

And if I’m lucky – I might write better for having read the best.

“Take you by both hands and pull you over the last line in more than you cared to say.”

“A poem begins as a lump in the throat, a sense of wrong, a homesickness, a lovesickness.”

There is a sadness in my Frost never fully explained.

“To be a poet is a condition not a profession.”

I think of “Lodged” every day now, and wonder how – if – he put the particularities of his sufferings into words.

“How many things have to happen to you before something occurs to you?”

In his poems, I see nothing direct about the mental illness. The loss of family, of children, of a wife. No word of it. Yes, there is “Home Burial”. But how much can we know about its facts and its fictions, even in the most heartfelt of lines?

“Tell me about it if it’s something human. Let me into your grief.”

Perhaps it is better this way – perhaps we ought to let Frost have something private, so that we know that we do not understand his flavors of pain.

“You linger your little hour and are gone.”

I now consider, what is it that I am walling in and walling out? And I consider the sadness I feel that on this earth, one should have to do either.

“And of course there must be something wrong in wanting to silence any song.”

I read Frost and consider not only my own suffering, but the suffering I have caused. The joy I have dismantled and dislodged…

“I could give all to Time except – except What I myself have held.”

and the joy that has been swept away from me, out of my hands.

Other than his journals, there were many writings from Frost I found moving and illuminating. I wrote these entries addressing Frost's overall style and particular poems that hit home for me. I tried not only to write on Frost's style but I tried to emulate my own version of it (to a degree), which is why my passages are so short. I wanted to write in something more meaningful than the 3-body-paragraph-form every student is reared to master. I wanted my reflections on Frost's work to be as unique as the lessons it taught me.

Frost never explicates whole persons in his poetry. Men are too odd to transcribe in even lines. At times he might write, “This person felt this, you see. And another said this.” But it is never a full portrait; on no occasion did he depict an entire being.

Merely the footprints of one man.

The smile of a beggar.

The hand of a child.

For it is not poetry’s job to say everything, but to say something.

In a hundred ways, the word “no” can rattle through a sentence, can hiss through the cavern of the windpipes and the parted bars of teeth. “No” is lenient; it is final; it is complete; it is preliminary; and, often, it is more than one of these at once… no?

A single consonant. A single vowel. It can spread the brows or crease them, shake a head or tilt it, can draw the eyes up, or down – is this a flaw in the language? No!

Determiner, exclamation, adverb noun – all spoken as a nasal consonant and a high back vowel! Context, tone, timbre, they don’t cloud the meaning – no – they clarify it.

At the zenith of my Frost I know

there is no zenith.

There is no ultimate peak to find, no eventual end-game that the roads or the passages of words were “leading to all along”.

With every word I wrote, be it with a smooth inky pen, or the dry clacking of my keys

I followed neither road nor trail to this place.

Now, I look to the sky and see stars holding each other apart and not together.

My head propped up by a book of poetry.

Perhaps it is more beautiful this way.

Where great authors reuse their own ideas (straight crookedness)

And their greatest works were not their latest works.

Where the point is not to hack at a poem until it is understood in its own light;

But to read the poems in light of one another.

And there are still shadows.

“something we were withholding made us week, until we found it was ourselves,”

And in My Frost, equal parts “My” and “Frost”, I ought not to forsake one for the other.

Just as I ought not to withhold my better ideas for later, the risky entries for another time.

Writing is now. Neither here, nor there. There is no point to reach but the point at which you stop reaching to be a better writer than you are and begin to be the writer you are – which is not a statement about skillset, but about heart.

My zenith is in the valley

Where I look up at the stars

And read a poem in light of all other poems ever written;

Let the light swell till it blinds me.

Emmaline B
The Narrative
83257
https://unsplash.com/photos/O0T1SIgHAfM