Why We Keep Captive Birds Of Prey 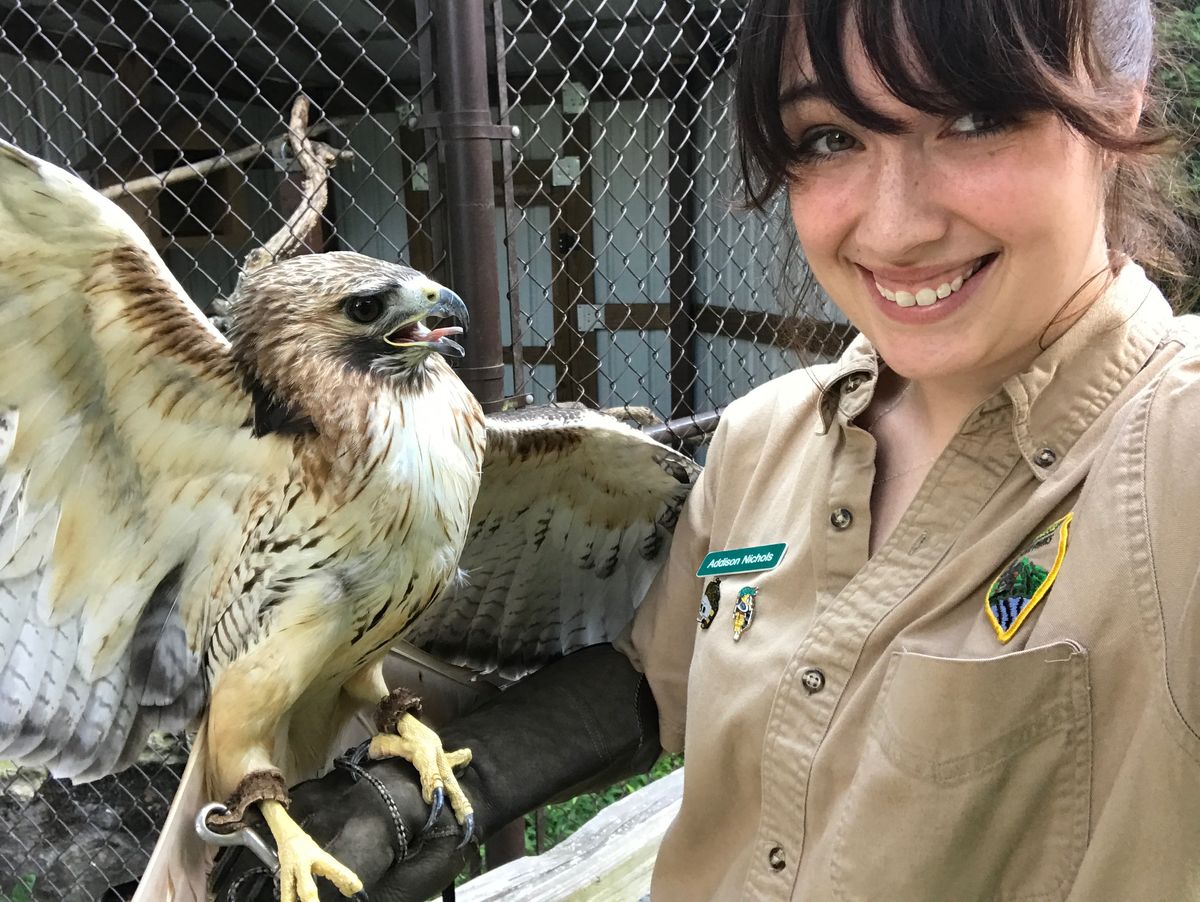 During the summer, I get a wide range of questions. Some come out of left field while others are reoccurring. One question I get a lot at the park is, "Where do your aviary birds come from?" This question is oftentimes accompanied by, "These birds don't belong here," and, "Why did you take them out of the wild?" It is for this reason that I address these comments any chance I get to shed some light on the situation.

I am fortunate enough to have started my park career at a licensed birds of prey rehabilitation center. At any given time, we have several owls and hawks brought to us that are injured. It may be an adult owl hit by a car or a juvenile hawk that tried to fly a little too soon. Regardless, we all do our best to release these birds, no matter what the injuries may be. A lot of times, we are able to help these animals through their rough patches and release them into a safer area. These birds are kept out of the public eye; that way, they have the least amount of human interaction possible. However, sometimes there are instances where the bird is unable to make it through or is not able to be released back into the wild.

The park's aviary has three owls and two hawks (plus one little owl inside the park's museum). Each of these feather babies have their own personality, but it does not come without previous struggles. The story behind our owls is pretty simple, since the issue is so common. All of our owls fell out of the nest when they were too young to fend for themselves. In some cases, owls will nest in abandoned buildings, and the mother will get scared off if people decide to move in.

At other times, siblings will push out the smallest in the bunch so that they are able to get more food. In those cases, people often try to put the owlet back. Unfortunately, babies are persistent and will push the baby back out. With this in mind, we got our owls in when they were very small.

As we raised them, even without a lot of human interaction, they imprinted on people. If we released them, they would come back in evening to wait for their food. One owl in particular, Lizzie, the barred owl, will call to me every morning until I go and talk to her. Milo, the Eastern screech owl, perches on my shoulder and lets me cradle him until he falls asleep. To say that they are spoiled at this point is a bit of an understatement.

Our hawks, on the other hand, have more physical than mental injuries. Bell, our red-tailed hawk, was hit by a car. This broke his wing, and since the wing bones in birds are hollow, most of the time it is not able to be fixed. Not only was the injury not able to be mended, but a condition called wing droop developed. This causes the injured wing to hang lower than the healthy one.

In the wild, Bell would only be able to fly about 100 feet before having to stop, making hunting impossible. Our red-shouldered hawk, Alamo, also has a wing injury caused by getting stuck in a barbed wire fence. She is also partially blind, making it to where she occasionally freaks out in her cage.

Even though we have some birds captive in our park's aviary, we have done everything we can to try to release them back into the wild. We have close ties with a veterinarian in town that is always more than happy to take on our cases. I won't lie, sometimes long hours have to go into caring for injured birds. You worry sick about them until they are okay, but in the end, being able to release something that originally did not have a chance of survival is pretty rewarding.

So, instead of being released, we use these birds to educate the public. Many people have never seen an Eastern screech owl or a red-tailed hawk up close and seeing these birds really sparks interest in people. Sure, some people may see these birds, be interested, and then go home and never think about them again, but others go home and learn more on their own. These people are the ones that take care of our environment, make it a safer place for our wildlife, and even grow up to be our future in conservation. To be able to be apart of this experience is rewarding all by itself.