Famous Maroon Band: Behind The Scenes 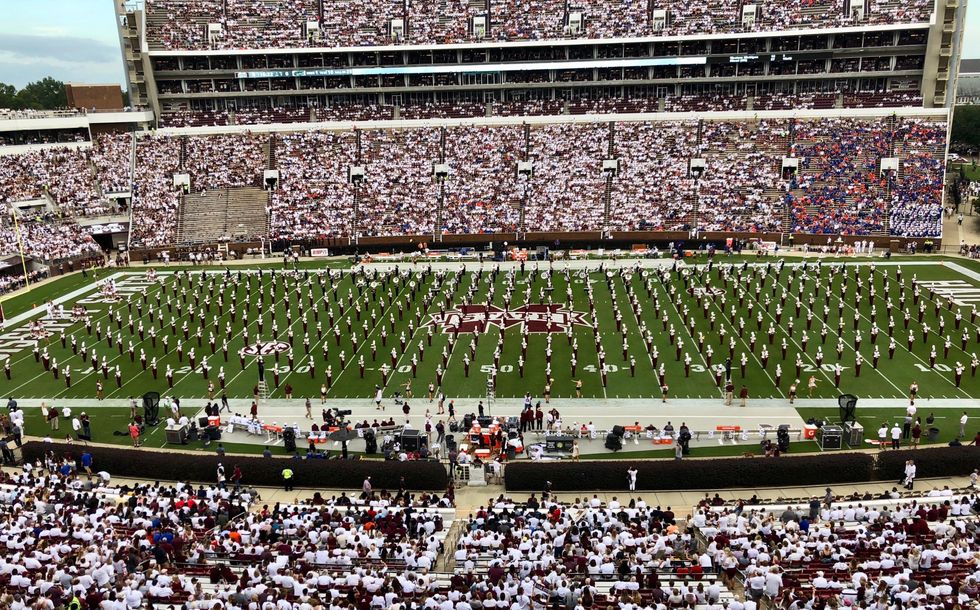 All About The Maroon Band

With an average ACT score of 27, over 75% of the Maroon Band graduated in the top 25% of their high school class. In addition to their academic achievement, one out of five band students were members of All-State Bands in their home state. The 400+ members of the Maroon Band perform at all Bulldog football games and numerous other events around campus during the academic year. While marching band occurs in the fall, five concert bands rehearse for performances in the spring semesters.

Our multi-piece uniforms set the stage for us and our performances. From the top of the plume on our hat to the cowbell hanging from our side, we are suited up and ready to go. The minute we step foot onto Scott Field in that maroon and white, it's go time. We raise our chins, hold our horns high, and give our performances all we've got.

Every band member knows the joy of hearing Mr. Kent Payne announce "another T" during our pregame show. We are very blessed to have our own announcer, specifically for all things band. Mr. Payne, an MSU alumnus, has been with our band program for numerous years helping out in any and all ways possible. His most known job is that he announces each of our halftime shows and our pregame show. During the STATE spell-out in our pregame show, Mr. Payne is most known for his saying, "Another T." (Listen next time; you'll hear it!)

We begin each game day at least 2 hours before kickoff. We start with a performance for the Dawg Walk where we cheer on our team in the few hours prior to the game. There is a drumline junction show that happens each week before each game. One of our favorite parts of game day is our warm up in McCarthy Gym, which is open to the public. After we march into the stadium and find our spots in the stands, we are treated well with water, granola bars, and the famous halftime hotdogs. As we wait for our moment to take the field, we are completely invested in the game, cheering for our bulldogs from beginning to end. With our cowbells strapped around our bodies, we are fully prepared to cheer and ring our team to victory each week.

Pregame is a huge tradition at Mississippi State. For the band, it's the part of the game that is the most exciting. From the first note of the MSU Fanfare, to the last note of Hail State, we are giving our all and living the dream of being on an SEC football field. There is so much history in our pregame show. Near the middle, we play Madelon, which was the first fight song of our university. The pregame show has very little changes in it from year to year. The only small changes are adding/subtracting numbers to our drill based on our roster for that year. We perform this with a more "military style" of marching. From Hail State cheers and chants, to patriotic tunes, and old memories, pregame is often the best part of game day for any FMB member.

Each year, the FMB performs about 4 different halftime shows. There is always a homecoming show and a patriotic show. Among those are 2-3 other shows created to appeal to the fans in the stands during halftime. This year, the FMB started off with a Marvel show consisting of music from the Avengers, Spider Man, and the Incredibles. Our next show is a movie musical show featuring music from The Greatest Showman, La La Land, and Mama Mia. Learning so many different shows during one season may seem overwhelming to some, but in the end, it makes rehearsal more fun and less repetitive.

We practice every day from 5-6 p.m. at our new synthetic turf practice field behind the band hall. Anytime you hear us and want to see what we're all about, come out and listen! We also have special Maroon Friday practices (home game weeks only) where we encourage family, friends, and fans to come out in their maroon and get a preview of what we will be performing that Saturday.