Traveling alone: the best and worst thing to ever happen to me. 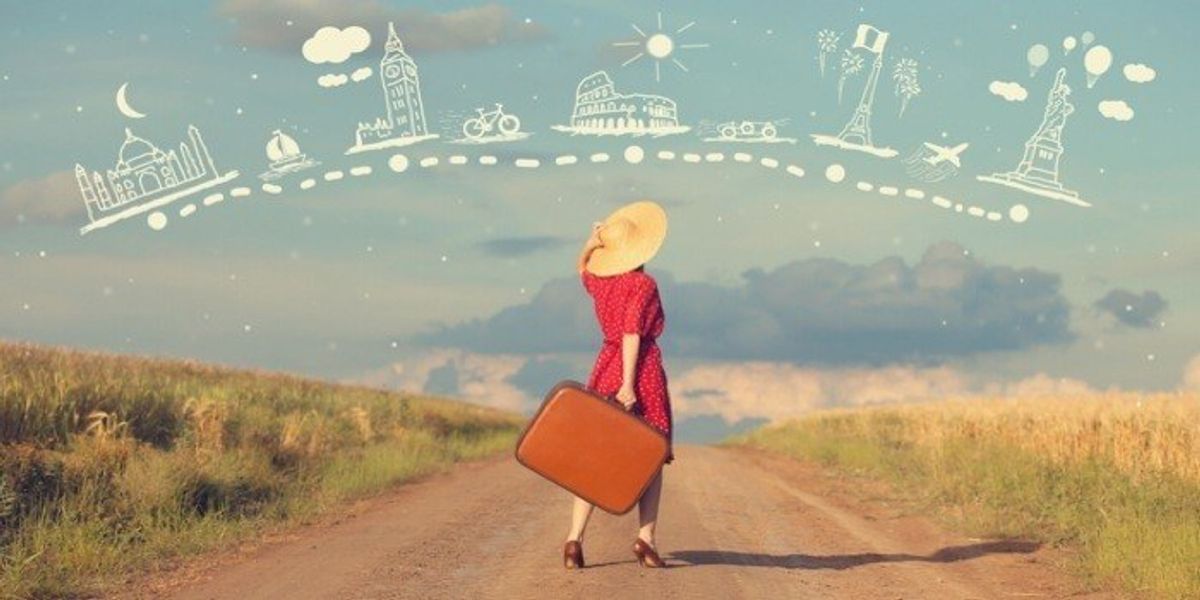 Ever since I was 15, I've dreamed of traveling. I made plans with my friends for anything from Disney trips to backpacking across Europe, and I definitely plan on accomplishing those plans someday.

Having grown up in a fairly small town in a state that Americans always confuse as a Canadian providence, my passion for traveling everywhere possible grew every year. I have pinned multiple travel hacks to a travel board on Pintrest, I follow travel blogs on my Tumblr, and the travel folder on my bookmarks bar is miles long. Even when my wallet is empty because of college, my dreams of traveling around the world and experience the cultures it inhabits is one of my biggest dreams in life.

So, you would think that getting to travel by myself for the first time would be an exciting experience, right?

Wrong. So, so wrong.

I was absolutely terrified. My entire life has been within one state with very few trips out of it for fun. Leaving my state to go somewhere else would only ever take a few hours, and then when I got to my destination, my family and I would settle in wherever we were staying and just enjoy ourselves.

This time, I had no family members to hold my hand when I got anxious. I had no one to talk to about my adventures that would experience them with me. All I had was myself, a suitcase, my phone, and God.

During the week before I was preparing myself, mentally going over scenarios where I would have to say no and watching self defense videos for the basics on how to keep myself safe. I thought I was ready, but once I actually got to the bus terminal of the Burlington Airport, I realized that I had no idea that I was doing.

The first bus was fine. I sat by myself at a window seat on a bus while I travelled from Burlington, Vermont to Albany, New York. People got on and off the bus at different stops, and the bus driver never asked to see my ticket, even when I forgot to give it to him.

After at least 5 hours on that bus, I got off at the Albany Bus Terminal and got in line for my next bus: New York City.

Obviously, I was excited about this ride. I visited the city a couple times before, and I was excited to be in it for a few minutes. However, I did not expect to be sitting on a bus packed with people that was quiet enough to hear a pin drop. Seriously. 52 people and no one spoke.

This entire time, by the way, my busses had not been on time. So you can imagine my panic when I got off the bus at the New York City Bus Terminal- which has 60+ gates- and had to find the next bus to Philadelphia. Oh, and I had about five minutes until the bus was supposed to leave.

Luckily, however, my bus arriving late spared me from having to fit on another full bus, instead putting me on a bus with maybe four other people while we rode off into the sunset to Philly.

Arriving in Philadelphia was another adventure, since I had to walk across the street to the train station, buy a ticket, and figure out where to stand in order to catch my train. It was loud, a little smelly, and extremely uncomfortable.

The train wasn't bad, and once I got off I just had to wait for a family friend to pick me up, and my adventure was concluded. Traveling alone was scary, but there were a few things that I learned along the way:

I'm typically classified as a know-it-all, since I learn things quickly and then just blurt out random facts about things during conversations. However, during this experience, I knew nothing; I didn't know where I was half the time, I didn't know what to do next, and I definitely didn't know anybody. Traveling alone was a humbling experience for me, making me take a step back and evaluate who I am.

This experience also made me put a lot of trust in God. I had to trust he would keep me safe, that he would guide me where I needed to go, and that he wouldn't let me fall or stumble into something that I shouldn't.

Overall, traveling alone has taught me a lot about myself and about the world, and I'm absolutely excited for my next private adventure!