Come have a listen and feel the nostalgia rolling in. 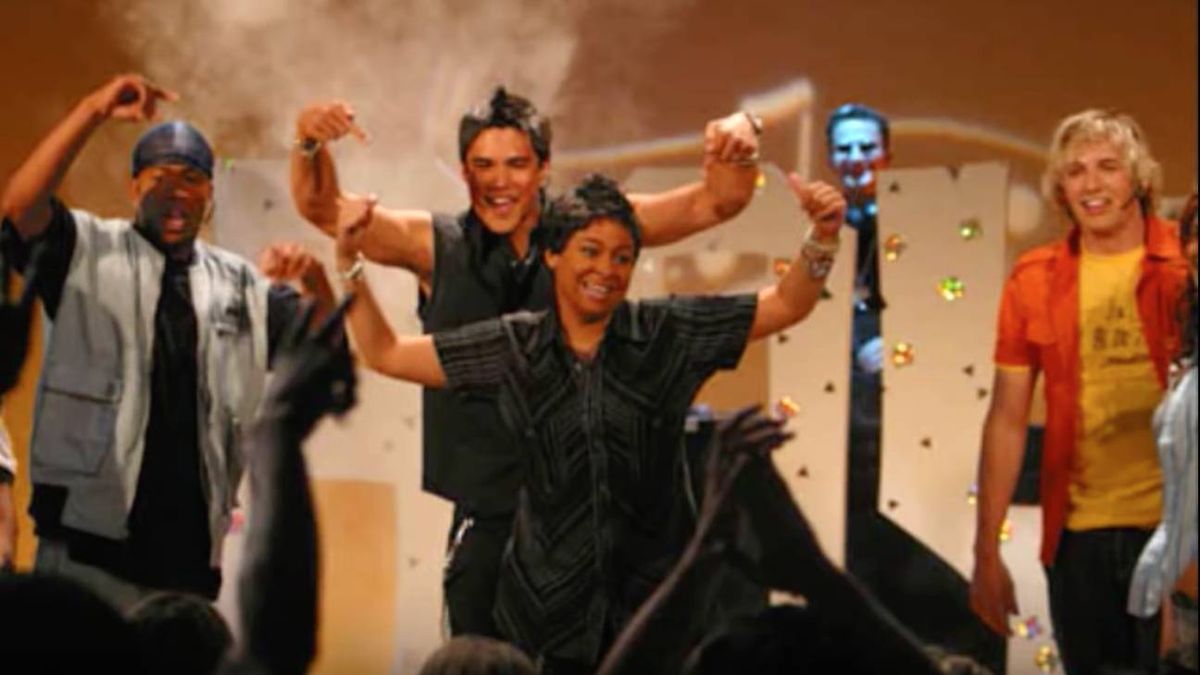 Old movies and TV shows from the '90s and early 2000s were the best. They had great storylines, awesome animations despite not having touch screen technology or popular social media sites to promote them on, and to top it all off, many of our favorite shows and films featured originally written hit songs that we sang along with and danced to and played karaoke to before we outgrew them and moved onto the latest hip-hop artists and top 40 songs.

Recently, my friends and I were discussing how the music back when we were younger was so different but still enjoyable. That’s when the topic of old cartoon bands came up. It was so interesting how most of the songs were created for a specific cartoon or show or movie and yet, the singers performed them so well and the songs themselves are ones that could be put on repeat for days on end.

So, I decided to make a list of some of the best fictional bands and musical artists that totally rocked our childhood.

The boys from Boyz N Motion stole many hearts with their appearance in the hit TV show “That’s So Raven”. Even years later, I know most of the lyrics to their song. I'm desperately hoping that they'll make a cameo in the spin-off series "Raven's Home" — fingers crossed!

Show they’re from: “That’s So Raven”

Other songs by them: “Be Prepared”

Love Händel was such an amazing creation. “Phineas & Ferb” was already known for their great episodes that featured many original songs, many of which became our favorites over the years, but Love Händel’s has some of the best songs, both as solo artists and together as a group. One of the voices from the band actually belongs to the voices of the band who sing the “Phineas & Ferb” theme song, the band Bowling for Soup.

Most famous/popular song: “You Snuck Your Way Into My Heart”

Other songs by them: “Santa Claus Is Comin’ To Town”, “Robot Riot”, “Bouncin’ Around The World”, and “The Ballad of Klimpaloon”

The Hex Girls were a rock band that appeared in my favorite Scooby-Doo movie. A band of sisters who were also witches, I thought they were the coolest ever. Plus, they sing about loving the earth and taking care of it and their songs are really enjoyable.

Movie they’re from: “Scooby-Doo! and the Witch's Ghost”

Other songs by them: “Hex Girls”

“Lemonade Mouth” was a feel-good movie with such danceable songs, it was the perfect package. Like a modern-day retelling of “The Breakfast Club”, all the characters are sent to detention for a different reason and there they form a friendship. They form a band and though they all start at the bottom, they slowly rise to the top and capture all the hearts of their classmates along with all our hearts.

Other songs by them: Breakthrough”, “She’s So Gone”, “Determinate” , and “Turn Up The Music”

The Oh Boyz were brought in to be shown as the stereotypical boy band and they were an obvious parody of The Backstreet Boys and *NSYNC, but they actually had some good hits.


Most famous/popular song: “I Want It My Way”

Other songs by them: "Quit Playing Games WIth My Head" and "Hello, Hello, Hello"

When I heard “Take Me Away” for the first time, I wanted to so badly be a rock star and to play awesome guitar solos like that. Oh, if only Pink Slip were a real band were still making music today.


Most famous/popular song: “Take Me Away”

Other songs by them: “Ultimate” which is played at the end of the movie.

A few people in the comments section mentioned that Powerline was basically a combination of Michael Jackson, Bruno Mars, and Prince of Disney and honestly, I don’t disagree. Powerline rocks and I have no doubt that if he were a human being and not an animated dog, that he would've still been huge till date.

Movie he’s from: “A Goofy Movie”

Other songs he has: “Shout Out”


As a tribute to the 20th anniversary of "A Goofy Movie", Tevin Campbell, who was the voice of Powerline, performed the song "I 2 I" live and you can tell from the video that everyone in the crowd was suddenly a young kid again as they cheered and sang along. (I'm not gonna lie, I was shrieking along with them the entire time.)