Executive Orders: How Does Obama Stack Up?
Odyssey
CurrentlySwoonLifestyleHealth & WellnessStudent LifeContent InspirationEntertainmentPolitics and ActivismSportsAdulting
About usAdvertiseTermsPrivacyDMCAContact us
® 2023 ODYSSEY
Welcome back
Sign in to comment to your favorite stories, participate in your community and interact with your friends
or
LOG IN WITH FACEBOOK
No account? Create one
Start writing a post
Politics and Activism

Executive Orders: How Does Obama Stack Up?

Has Obama overstepped his executive power by using executive orders? 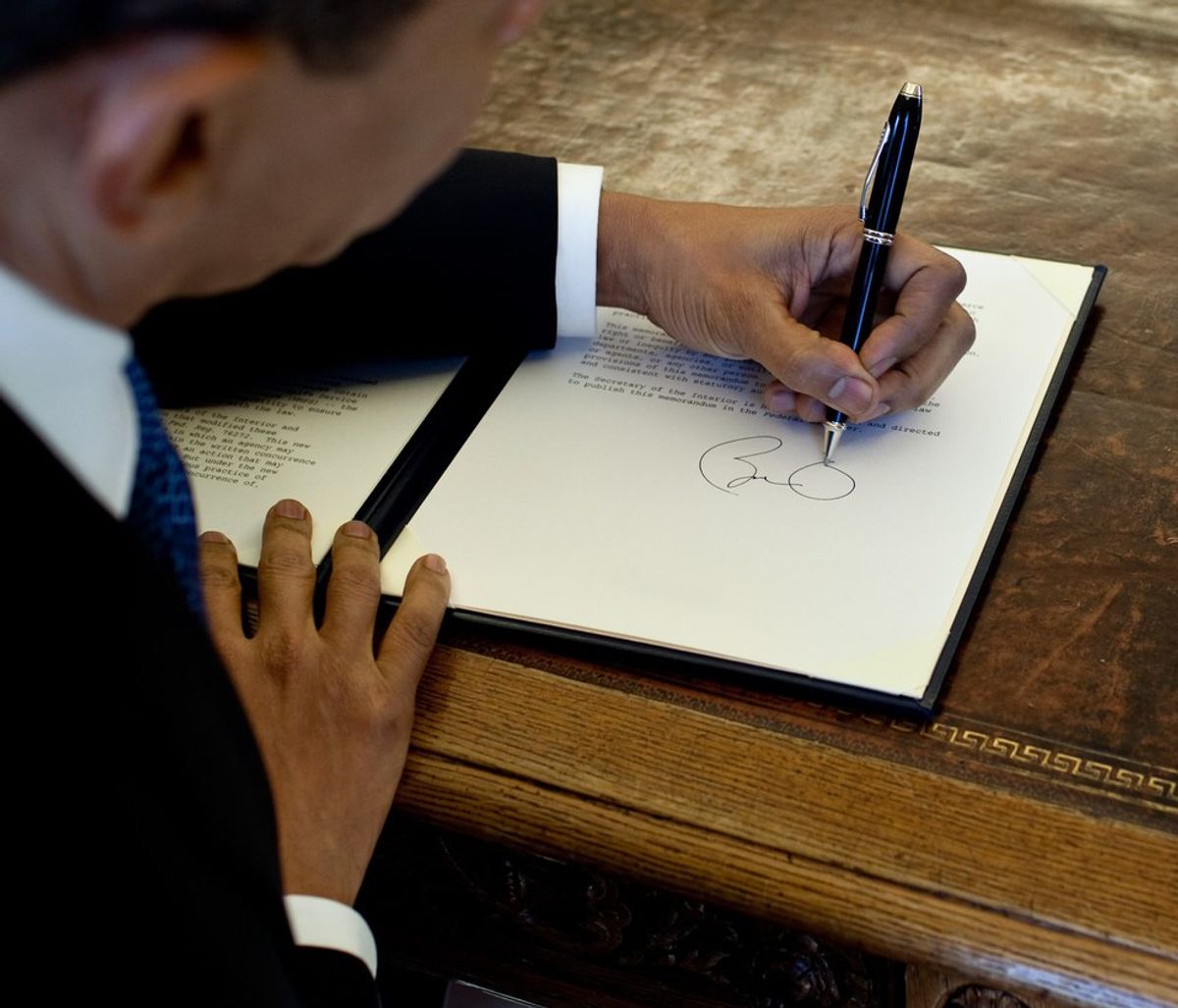 President Obama was under fire in late 2015 for an executive order that expanded gun control, and he has been accused of overstepping his executive power. Many GOP candidates (when the election was in its earlier stages) were ridiculing him for his use of executive orders and vowed to overturn some of them.

Executive orders are not explicitly defined in the Constitution. The Constitution does say that “he shall take Care that the Laws be faithfully executed,” (Article II, Section 3). This is a bit of a vague statement, but it has been used to justify executive orders, and many conclude from this statement that an executive order is within the president’s power and duty.

President Obama’s Usage vs. Past Presidents

The graph below maps the total amount of executive orders that each president passed. Keep in mind that some presidents were in office longer than others, such as the four terms that Franklin D. Roosevelt spent in office. A quick calculation will tell you how many each president passed on average per year if that is of interest to you. The data I have graphed here is just the total across all of the terms. The solid line that runs through all of the bars is the average number of executive orders across all of the presidents.

He was under fire for his gun control order, as well as others such as the one that limits anti-LGBT workplace discrimination. In my own opinion, I do not believe that he overstepped his executive power by issuing these executive orders. Here are five executive orders from other presidents that I believe had a wide scope of influence. Some of them, I believe, had a wider scope than some of the executive orders Obama passed that were under fire.

The Emancipation Proclamation, which freed all of the slaves living in the Confederacy, was passed by President Lincoln in 1863. It was passed using an executive order.

President Kennedy used an executive order to pass Affirmative Action laws in 1961 that mandated that workplaces cannot discriminate workers based on their race, color, or national origin.

Although Brown v. Board of Education overturned segregation of schools, it took more than a court order to make a meaningful change. President Eisenhower used an executive order to place the Arkansas National Guard under federal control and send U.S. troops to Little Rock High School to allow nine black children to attend school safely.

During World War II, anti-Japanese sentiment ran wild. President Roosevelt used an executive order to authorize “Japanese Relocation.” This authorized the internment of thousands of American citizens with Japanese ancestry as well as residents that immigrated from Japan.

This isn’t exactly an executive order, because there is no written record that explicitly orders the use of the atomic bomb on Japan. The closest thing is Truman’s letter to Secretary of War Henry Stimson, in which he authorized a public statement about the use of the bomb. This letter served as the final authorization for the use of the bomb. He used his power as Commander in Chief to authorize the use of a weapon without Congressional approval.

I feel that with the upcoming election looming over our heads, it’s important to know about executive orders as being part of presidential power. Keep in mind that executive orders can be used with virtually limitless power, and I think we really need to be sure that regardless of whom we elect, we feel that we can trust them with this executive power.

Nicole Marie Nigro
Individual Creator
9001
c1.staticflickr.com
Where to start...... Let me start with the cliche that life throws us curveballs and what we do with it is what counts.