Five Examples of Postmodernism in Television

Postmodernism is a complicated philosophical movement and it's influences can be found everywhere. 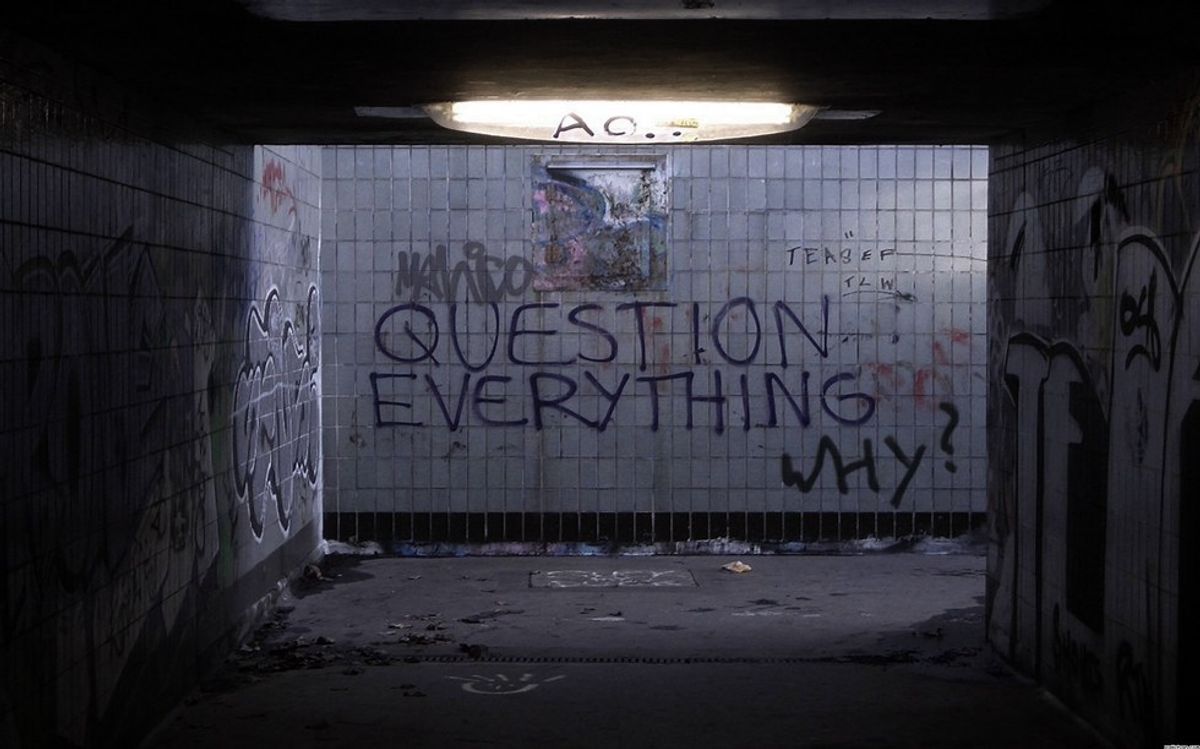 Postmodernism is probably a word you’ve heard tossed around in conversation about paintings that look like plain blocks or movies you thought didn’t make any sens. However, you may not know the definition of postmodernism or where it comes from. Postmodernism is the ideological response to modernism, which can be defined as the rejection of traditional ideas about how the world works and how we can make sense of it. Before modernism, it was generally thought that everything could be explained through religion or science. Modernism was a rejection of this concept in the sense that many people became disillusioned with the idea that religion or science could be used to explain everything, believing instead that religion and faith were “holding back” progress for humanity. Modernism was the beginning of creating things for the sake of creating them and using them to explore oneself and humanity more thoroughly. Modernists generally believed that this was the best way to understand how the world works; you must truly understand yourself before you can understand humanity and the world around.

Postmodernism rejects this, and basically everything, in an extreme and sometimes nihilistic manner. Postmodernism says that everything is relative and constructed by political, social and historical perceptions, therefore nothing can be adequately explained by any sort of grand theory, idea, or meta-narratives. Postmodernism is often very self-referential and ironic. Often times, postmodernism can be used to critique the way certain things work or they way certain things are. Often times, however, postmodern works of literature or art may just be absurd for the sake of being absurd. Many, many television shows of the last 20 years or so adopt at least some form of postmodernism. Here are some fantastic examples of postmodernism in current television shows.

Bob’s Burgers is one of my personal favorites, and it constantly utilizes pop culture references to make the viewer feel like they are “smart” or “smarter” than those who don’t get the references. There are examples of this all throughout the series. In Season 3, Episode 2, it’s Halloween and Tina, Gene, and Louise are all dressed up and ready to go Trick-or-Treating. While the kids are getting ready to leave, Linda asks about everyone’s costumes. She sees Louise and says “Ooh, Wolverine! Scary!” and Louise says “I’m Edward Scissorhands.” Unless you’ve seen Edward Scissorhands and at least one X-Men movie or comic book, this joke won’t make any sense to you. On the opposite side, if you have seen or know of both of these references, you immediately feel rewarded for being “smart enough” to understand the joke. Also, if you’ve ever seen Bob’s Burgers, Bob always has a burger of the day. The burgers all have corny, dad-joke type of names. However, a lot of them also contain pop culture references. In Season 1, Episode 10, the burger of the day is the “Hit Me With Your Best Shallot Burger” which is obviously a reference to Pat Benatar's “Hit Me With Your Best Shot.” In Season 1, Episode 12, the burger of the day is the “One Fish Two Fish Burger” which is a reference to the classic Dr. Seuss book.

Community is another fantastic example of postmodernism within television shows. As the Idea Channel on YouTube has suggested, Community may even be a “Postmodern Masterpiece.” This show is littered with self-referential jokes, pastiches of countless film genres, and discussion of postmodern ideas within the episodes. There is a western episode, an apocalyptic episode, a love story episode, an action episode, etc. In the pilot for Community, Jeff Winger says “I discovered at a very early age that if I talk long enough, I could make anything right or wrong. So, either I’m God, or truth is relative.” A quote couldn’t be more postmodern than that.

Family Guy might be the King of pop culture references, and I think everyone knows that at this point. Every single episode contains some sort of flash reference where they make fun of a celebrity, an event, or something similar. In Season 3, Episode 3, a tobacco company buys the toy company that Peter works for. The tobacco company begins placing advertising into the children’s toys, and in one instance, they flash to an advertisement that uses the 1954 television show “Lassie” to jokingly show how companies place advertising in their products. In Season 5, Episode 14, Brian and his black roommate are watching television when the results of the OJ Simpson trial are released. Brian’s roommate is happy about the not guilty decision, while Brian is angry about the decision. Family Guy even occasionally references postmodern ideas outright, such is the case with Season 10, Episode 21, where Peter paints a picture of a family on a couch. However, instead of painting them as they are, he paints them with the two males as they are and the two females making out in their underwear. When the family gets angry about the painting, Peter says “I painted the truth. My truth.”

While Ed, Edd, and Eddy may not be current, it's still a phenomenal show with loads of postmodern tendencies. Characters on this show frequently break the Fourth Wall. For those who don't know, the “Fourth Wall” is an imaginary wall between the characters of a show or performance and the audience. One very recent example of this is Deadpool, which is a fantastic movie as well. The whole character of Deadpool is based on the idea that Deadpool knows he's a character in a fictional universe, and he loves pop culture references and talking to his audience. In Season 2, Episode 4, Eddy decides to create a show where the kids in the cul-de-sac can showcase their talents. He has them audition, and when Rolf comes to audition he says his piece is called “the dance of the hairless otter” to which Eddy responds “Next! There’s no budget for subtitles.” In Season 2, Episode 13, Edd says “I think I’ve lost ten pounds this season!”

Breaking Bad is a very different example of postmodernism. In this series, as many of you probably already know, Walter White is a chemistry teacher at a high school, and he also works at a car wash. As a result of working at the car wash without proper safety precautions being taken, Walter ends up getting lung cancer. Also, his wife Skyler is pregnant with their second child. Walter doesn't make very much money and quickly realizes that the cancer is terminal and he isn't going to be able to leave enough money for his family to survive without him. His brother-in-law, Hank, is a DEA agent, and after seeing a meth bust on television, Walter asks to accompany Hank on one of their meth busts. Long story short, Walter ends up finding one of his former students, Jesse Pinkman, who also cooks meth, and they team up together to make the purest meth on the streets. Initially, Walter does this so he can make enough money to support his family after his death. However, as the show goes on, Walter slowly descends into wickedness. Without spoiling too much for anyone who might not have seen the show yet, Walter does some very, very awful things. He becomes coldhearted and cruel. Breaking Bad is truly one of the most fantastic television shows ever made, and I strongly recommend watching it if you haven't already. You'll love Walter in the beginning, and throughout, you'll slowly go from admiration for his strength and toughness, to disdain for the awful lengths he'll go to reach his goal, despite who it affects in the process.

Nicole Marie Nigro
Individual Creator
5945
c1.staticflickr.com
Where to start...... Let me start with the cliche that life throws us curveballs and what we do with it is what counts.