A Definitive Ranking Of Every Dunkin' Donuts Flavor Shot & Swirl — Yes, I Tried Every Single One

I tried all of the Dunkin' flavor shots and swirls so that you don't have to. 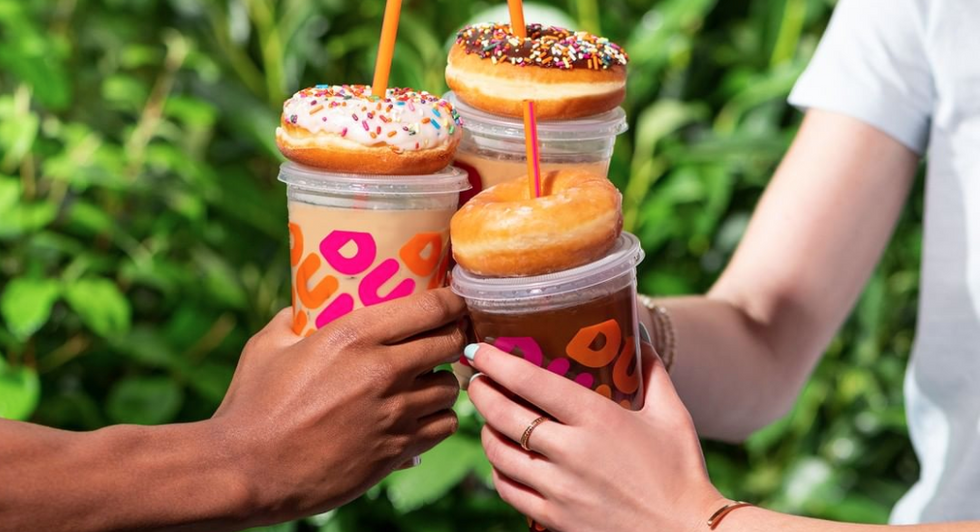 *Disclaimer: I ordered all of the drinks in a size small, with two creams and two pumps of the flavor swirl, and with the flavor shots I added two pumps of liquid cane sugar because they do not come sweetened.

No. While the flavor itself did taste like raspberry, I do not believe raspberry belongs in coffee. If I were to get this flavor again at Dunkin', I would try it in an iced tea, but save your taste buds and don't get a raspberry shot in your coffee.

While I have a lot of friends who's go-to coffee flavor is the French Vanilla Swirl, I am not a fan. It's sickly sweet and does not have the most authentic vanilla flavor.

Not bad, but not anything special either. I like coconut, but I am not a huge fan of coconut in my coffee. I don't have anything much to say about this flavor other than it tastes exactly as you would expect.

Unlike the Raspberry Shot, I didn't hate the Blueberry Shot in my coffee. In fact, I may go as far to say I surprisingly liked it. It tasted as though I was pairing my coffee alongside one of Dunkin's delicious blueberry muffins, without having to eat the additional calories of the muffin.

This flavor is pretty tasty, but the Hazelnut Swirl is just a significantly better option, so I could not stand to put the shot version of this flavor any higher on the list. However, for those who do not like their coffee sweet, I would definitely recommend this flavor.

Unlike its flavor swirl counterpart, the French Vanilla Shot adds a vanilla flavor to your coffee without the medicinal taste the swirl provides. I would recommend adding the vanilla flavor shot to a beverage already sweetened with a flavor swirl for a fun flavor combo.

Tasty. I do not really understand the point of a Mocha Swirl when you are putting it in coffee, because isn't mocha just chocolate and coffee? So why would I want to add more coffee flavor to my coffee?

Either way, this flavor just tastes like chocolate syrup in my coffee, so it's safe to say I am a fan. Bonus points if you mix Hazelnut and Mocha Swirls to create a delectable Nutella flavor in your coffee.

This flavor may be a bit higher on the list due to the fact that I am biased towards anything almond-flavored. Dunkin' delivered with this flavor shot, as I can even taste the "toasted" element. This flavor is elevated when mixed with the french vanilla flavor shot.

Delicious and hazelnutty, I sometimes switch from my classic Caramel Swirl order to get this flavor in a hot coffee come fall. While it still tastes amazing in an iced coffee, the Hazelnut Swirl tastes like Christmas in a cup when added to a warm beverage.

Many turn their nose up at this flavor, but Butter Pecan Swirl makes one's coffee taste like liquid ice cream. The Butter Pecan is a rich sweet and slightly nutty flavor that pairs so well with a creamy Dunkin' iced.

Tried and true, the Caramel Swirl (unsurprisingly) takes first place. Everyone who I have introduced to this beverage continues to get it to this day, and it's no surprise.

The caramel flavor adds just enough of a sweet, creamy flavor that is not too overpowering and accompanies the coffee so well.

Overall, I plan to continue sticking with my classic order, a Medium Caramel Swirl Iced Coffee with just cream, but trying all the flavors will encourage me to maybe switch it up or mix two flavors together in the future.