He somehow just gets worse and worse. 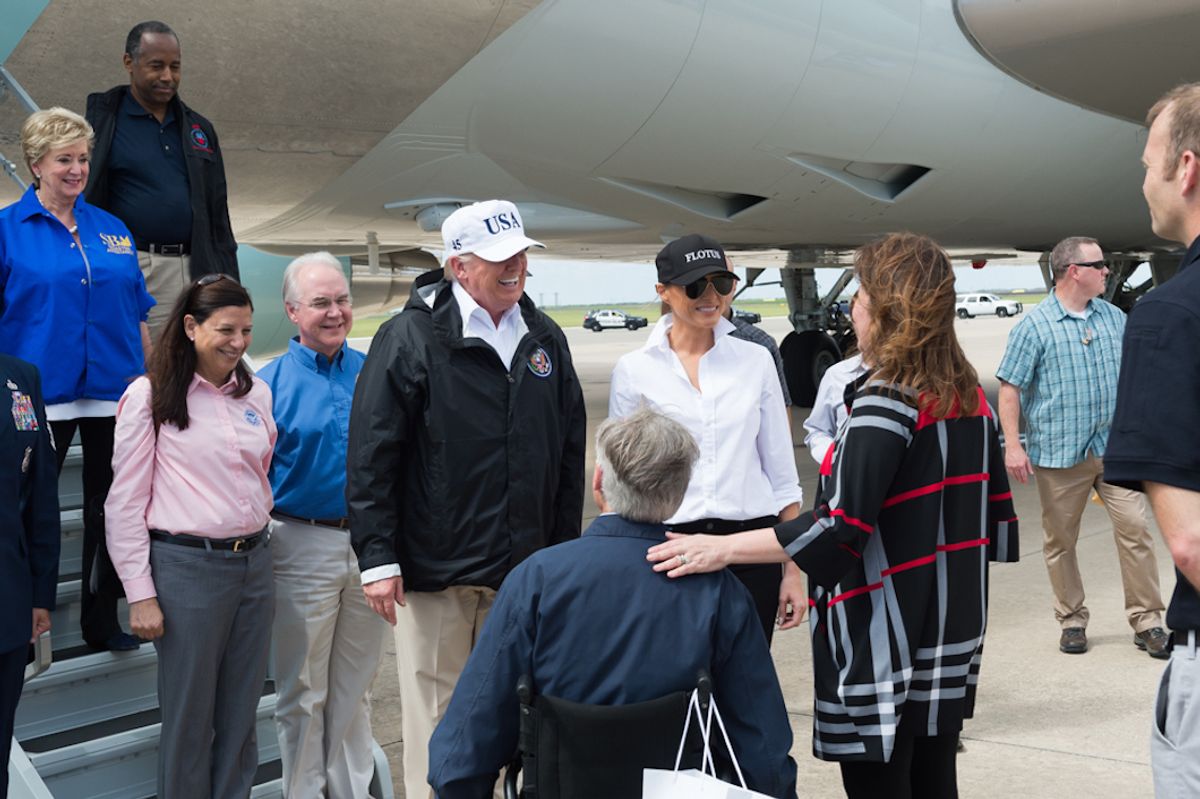 On October 3rd, President Trump visited Puerto Rico an island that has been ravaged by Hurricane Maria. Donald threw paper towels at the crowd who gathered to see him just outside of San Juan as if they were at a baseball game, and he was tossing t-shirts. As if that wasn't already degrading, Trump also said this:

"Every death is a horror, but if you look at a real catastrophe like Katrina, and you look at the tremendous — hundreds and hundreds and hundreds of people that died, and you look at what happened here, with really a storm that was just totally overpowering, nobody's ever seen anything like this. What is your death count as of this moment? 17? 16 people certified, 16 people versus in the thousands. You can be very proud of all of your people and all of our people working together. Sixteen versus literally thousands of people. You can be very proud. Everybody around this table and everybody watching can really be very proud of what's taken place in Puerto Rico." - Donald Trump (taken from CNNpolitics by Chris Cillizza)

I could end this article right here, and that would be enough as Trump's comments speak for themselves. Trump's careless and rude comments are not surprising, but it is scary that we have come to expect this. Trump has the most powerful seat in the US, and know he is going to other places in times of crisis and acting like the unprofessional we all, here in America, know he is. If America did not lose enough respect upon Donald being elected into office, we are certainly getting to a point where the rest of the world will have no respect left.

Donald, throwing paper towels at people is not a proper way to provide aid and resources. The individuals have just been through a horror that destroyed virtually their entire island, be that as it may, you don't think it's a real tragedy Donald, but we will get to that later. They have been through a tragedy, and they do not deserve to be treated with such little respect. They are in need and the job of a president is not to throw desperately needed supplies at them but to provide a way for the citizens of Puerto Rico to get back on their feet.

And to his defenders who will say, "he didn't mean it like that", and "he was just saying not as many people died." I am sorry but when you are President of a country, you do not get to not mean things. You do not get to say stupid things and then take them back. Donald Trump is president and that means the things he says are heard by everyone. The things he says reflect on America as a country, and reflect on American citizens and government for providing him with the seat he sits in. This is not about us liberals being 'sensitive' or us overreacting. One simply cannot go to a country, and tell them that the 16 people they lost will not be counted as a real tragedy. One cannot go to a country and tell them that their losses are not "real."

Glorie Martinez
5453
Why I Write On Odyssey