It's okay Disney, a man can save me any day. 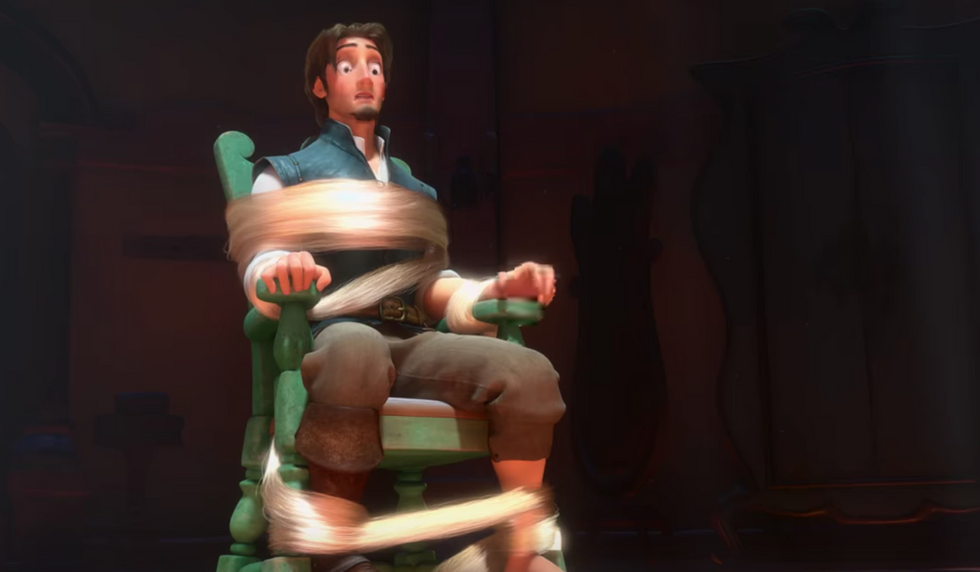 It's okay Disney, a man can save me any day.

Usually, I wouldn't choose Urban dictionary for a definition, but they have feminism spot on; "Why just b**** to your friends when you can pretend to be oppressed and annoy everyone?"

They're not wrong. They act like victims but victimize men with their disrespect and the very inequality they "fight" for.

I was at a movie recently and as I was sitting in the dark theatre watching the commercials I noticed a reoccurring theme- feminism. The commercials were not PG-13 films with women leads, romance, action and girl power. No, these were kids' movies.

A character in the Lego movie berated the male lead and acted like he was a worthless piece of plastic. She even made him look pathetic because he was optimistic. I guess feminists would rather look at the glass half empty. The whole commercial the male looked like a complete idiot while the female led the way in a cool outfit and took charge. The antagonist did a scan of the male for his character traits and they included; "weak, naïve, simple, powerless, and less than special." The antagonist also went on to ask who the leader was.

The female lead weakly tried to defend him then gave up after the antagonist said to her, "you fought and master built and kicked butt and then that helpless male was the leader?"

Seriously? Since when did producers start making their male characters helpless? Or start inserting feministic views into their kids' movies?

I'm perfectly fine with females being the lead or being portrayed as amazing, but that does not mean males have to be put down and degraded in the process. Why does a children's movie have to be intertwined with feminism? Why can't it simply be a cute movie about Legos saving their planet? Why on earth can't kids just watch a simple movie without being told how to think or girls being told they are better than guys? I wonder how the little boys feel about that.

The commercial for "Wreck-It Ralph" came on as well. It was fine until the Disney princesses showed up. I love the Disney princesses and thoroughly enjoyed dressing up as them when I was little. However, 7-year-old me never found a problem with the cute, brave princes saving their girls. 19-year-old me doesn't have a problem with it either. Apparently, Disney does, however. A little girl is dropped into the room filled with the princesses.

As they all tried to figure out who she was and if she had the qualities that make someone a princess, Rapunzel sarcastically asked her, "Do people assume all your problems got solved because a big, strong, man showed up?" The girl replied with, "Yes! What's up with that?" To which a resounding, "She is a princess!" arose from the other princesses in the room. Newsflash Rapunzel, you didn't leave your castle until the man came into your life.

I simply do not understand why writers and producers feel the need to insert feminism in a children's movies. It isn't that they have made the princesses helpless or made female leads weak in the past. So why do they now have to go to such an extreme and make the princesses look like they are the victims of sexism and take out their revenge on men?

Men and women complement each other and the princes and princesses in the movies make the films that much more romantic and sweet. Who wants to watch a kids movie with a female Lego character parading around the screen for two hours with an attitude as she disrespects her male counterpart? Would the princess movies still be enjoyable if there was no romance and the girls were mean to men when offered help?

Feminism was born out of a desire for equality. Women fought to have the same rights as men. Those women should be applauded for their actions. They paved the way.

Today's women should be ashamed. They fight for "equality," but we already have it. By ranting, protesting, and being degrading to men, they are undoing what women so many years ago fought for.

By putting feministic, insulting lines in kids movies, they are re-starting inequality and helping spread it by filling children's minds with their negative views. To all the feminists out there, you're bad enough with your lies, cruelty, victimizing, and inequality. Don't start it with the kids. Oh, and Disney- if you want to get rid of your princes, send them my way.

Madison Franz
The Narrative
1110860
Photo by Brooke Cagle on Unsplash

Madison Franz
The Narrative
651258
Photo by Manny Moreno on Unsplash