Defining The Allegory Of Dante's Inferno
Odyssey
CurrentlySwoonLifestyleHealth & WellnessStudent LifeContent InspirationEntertainmentPolitics and ActivismSportsAdulting
About usAdvertiseTermsPrivacyDMCAContact us
® 2023 ODYSSEY
Welcome back
Sign in to comment to your favorite stories, participate in your community and interact with your friends
or
LOG IN WITH FACEBOOK
No account? Create one
Start writing a post
Politics and Activism

Defining The Allegory Of Dante's Inferno 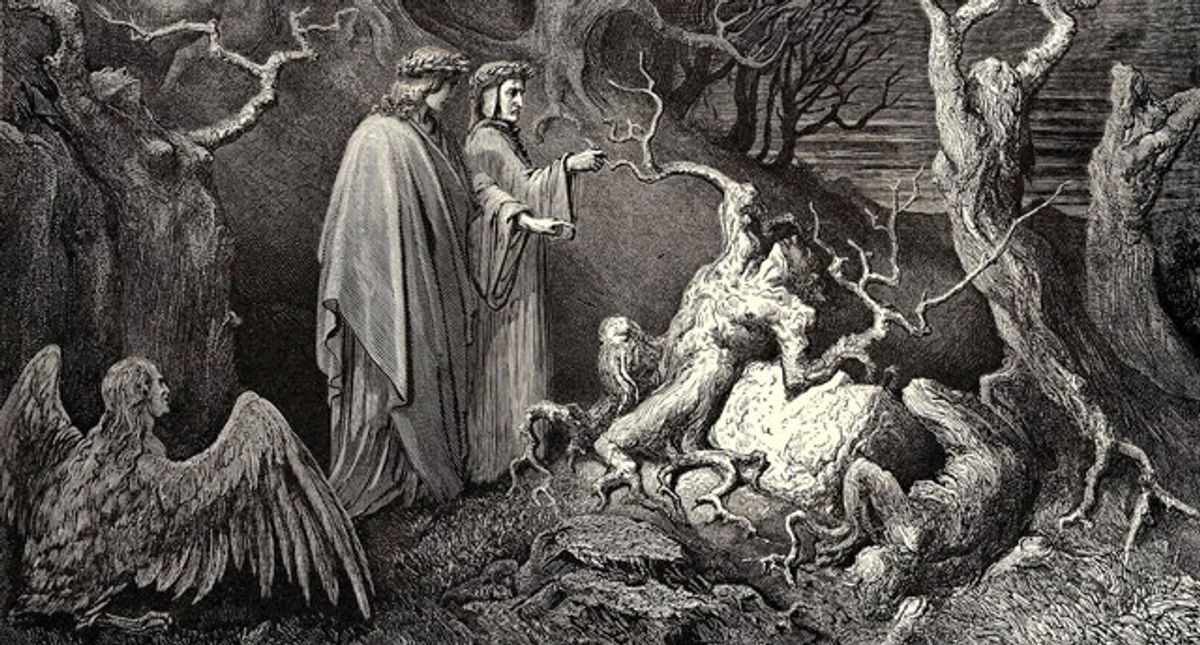 Dante is the author of a three-part trilogy following the journey of Dante, the pilgrim. This essay addresses three cantos from Dante’s Inferno, the first installment of the trilogy. Inferno tails Virgil who leads Dante through Hell after being spurred by Beatrice, and ultimately God, to begin a passage to aid Dante in recognizing and repenting for his sins. In this journey, Dante encounters beasts, sinners, and even people from his own past in each canto, as he begins to better himself in the hopes for salvation in the future. In each canto, a particular sin and sinners who have been charged as guilty of committing that sin are revealed in an allegorical manner, however, this essay will only focus on three: cantos I, XIII, and XXI. In each of these cantos, something deeper is revealed on an allegorical level by both the sin and the sinners representative of each circle of hell.

Before beginning, it is important to define what an allegory is in the way that affects the focus of this paper. According to the Oxford English Dictionary, an allegory is “the use of symbols in a story, picture, etc., to convey a hidden or ulterior meaning, typically a moral or political one; symbolic representation.” An allegory is a story that can be understood in a different manner to reveal a meaning that may not be a superficial one. Typically, this meaning is one of a political or moral manner. Therefore, in Dante’s Inferno, each canto functions on an allegorical level in the sense that the sins and the sinners in each canto may reveal some aspect of Dante’s life. Living in Florence was Dante’s hell and thus much of this comedy reflects that. It takes a certain amount of background knowledge and understanding of Dante’s own life to appreciate the lessons brought forth in each canto and in the Inferno as a whole.

Canto I both foreshadows and reveals the ultimate source of allegory for Dante. As mentioned, for Dante, life in Florence was his own hell. There, Dante must suffer and take time to review his actions. The entirety of the Inferno reflects this, however, Canto I does go in depth on an allegorical level regarding the journey itself. Dante wakes and finds himself “in a dark wood” (I, 2). He has strayed from the light and cannot return to it until he has suffered for a period of time. This is reflected in the journey Dante will take from Inferno to Purgatory and eventually to Paradise. The light is Paradise in an allegorical sense. In Dante’s real life, Florence is the journey and the “dark wood” that he is caught in. Here in Florence, Dante must suffer political turmoil between the white and black Guelfs along with religious turmoil. Much of this is reflected in his allegorical depiction of the Inferno and the people in it. Canto I does well to set the scene for this reflection.

Canto XIII reveals the deeper meaning of sins and sinners’ faults through the suicides, revealing religious allegory. The suicides negated their own lives and thus had no chance to repent for their sin. This sin is explained through the story of Pier Delle Vigne who acted in violence against himself when he committed suicide after everyone thought he committed treason against the government and disobeyed the Emperor. Pier claimed he was not guilty of this. According to Pier, “That courtesan who constantly surveyed / Caesar’s household with her adulterous eyes, / mankind’s undoing, the special vice of courts, / inflamed the hearts of everyone against me,” (XIII, 64-7). Dante’s allegory in this Canto demonstrates what he has been witness to for his whole life in Florence, and that is honest people falling victim to the corruption of politics. In the case of Pier Delle Vigne, this is a double edged sword. His story reveals the potential for corruption whether or not he actually committed the crime. If Pier did, then he is a corrupt member of the government. If he didn’t, he was found guilty for a crime he was innocent of which is corruption in the government’s legal system. Dante’s allegory in Canto XIII is critiquing the web of lies surrounding the government and the people who work for it.”

In addition to its political allegory, Canto XIII has more of a religious allegorical meaning than Canto I because Pier Delle Vigne is contrasted with Saint Peter in several ways. First, in both a literal and figurative sense, Pier did not let many people in: “I let few into his confidence,” (XIII, 61). St. Peter in a literal sense is more open than Pier, and is the one opening the gates to heaven to allow people in. He also opens his heart up to more people than Pier does. Second, a big difference between St. Peter and Pier is that St. Peter repented while Pier did not. Not only did Pier not repent but he also finds no fault in his actions: “Never once did I break faith with my lord,” (XIII, 74-5). However, this is known to be false because Pier committed suicide against himself and therefore against God. It seems that Pier prides himself on being perfect and maintaining his faith when just isn’t the case.

Canto XXI continues to elaborate on Dante’s unique depiction of sins in the Inferno and the allegory associated with it. In this Canto, the devils’ behavior is a bit more immature. They cook sinners and trick them into crossing a bridge constantly so that the sinners are punished incessantly (XXI, 54-75). The behavior of the devils is elaborated on as some form of comic relief. The devils communicate through farting sounds and are tricksters (XXI, 139). He chose to depict the devils’ behavior in this manner not only to emphasize how casual their form of evil is but also to demonstrate this behavior to display Dante’s way of utilizing his imagination and embellishing allegory. In this way, the allegory can be dressed up in several fashions. The allegory that is described in Canto XXI is more of a political allegory because Dante describes the sinners who were swindlers in public offices who sinned against the state.

Hell’s organization by Dante is an allegory. The first time Dante introduces Hell’s organization is in Canto I when Dante, the pilgrim, is introduced to the three beasts: the leopard, the lion, and the she-wolf. The leopard is representative of incontinence, the lion of violence, and the she-wolf of fraud. It is no coincidence that Dante meets the beasts in this order. The sins the beasts embody represent the severity of sins in Dante’s mind, and thus are representative of the order of sins and circles in hell.

It is important to discuss the order of the sins Dante and Virgil see through the layers of the Inferno because as the comedy continues and the two head further down Hell, the sins they encounter worsen. This order is not by mistake. Dante intentionally places sinners who are corrupt politicians, for example, closer to hell. For example, Canto XXI deals with sinners who have sinned against the state while Canto XIII deals with sins of the suicides. In Dante’s mind, suicide is a lesser sin than crime against the state is. Dante’s order of sins in the Inferno can be attributed to his own life experiences. The political struggles he faced caused he and many others a significant amount of grief; this struggle the reason being why Dante was exiled. The order of sins is a direct reflection of the sins that affected his life.

Dante’s life experiences affect his writing in more ways than one. Whether it is in the characters of sinners and their stories it is in the Inferno’s structure itself, Dante’s application of life experiences fill his work with both religious and political allegory. Cantos I, XIII, and XXI each demonstrate how Dante’s own life as a politician influence his work and reveal something deeper about his own life.
Report this Content
This article has not been reviewed by Odyssey HQ and solely reflects the ideas and opinions of the creator.