The Dark History Of The Congress Plaza Hotel
Odyssey
CurrentlySwoonLifestyleHealth & WellnessStudent LifeContent InspirationEntertainmentPolitics and ActivismSportsAdulting
About usAdvertiseTermsPrivacyDMCAContact us
® 2023 ODYSSEY
Welcome back
Sign in to comment to your favorite stories, participate in your community and interact with your friends
or
LOG IN WITH FACEBOOK
No account? Create one
Start writing a post
popular

The Dark History Of The Congress Plaza Hotel 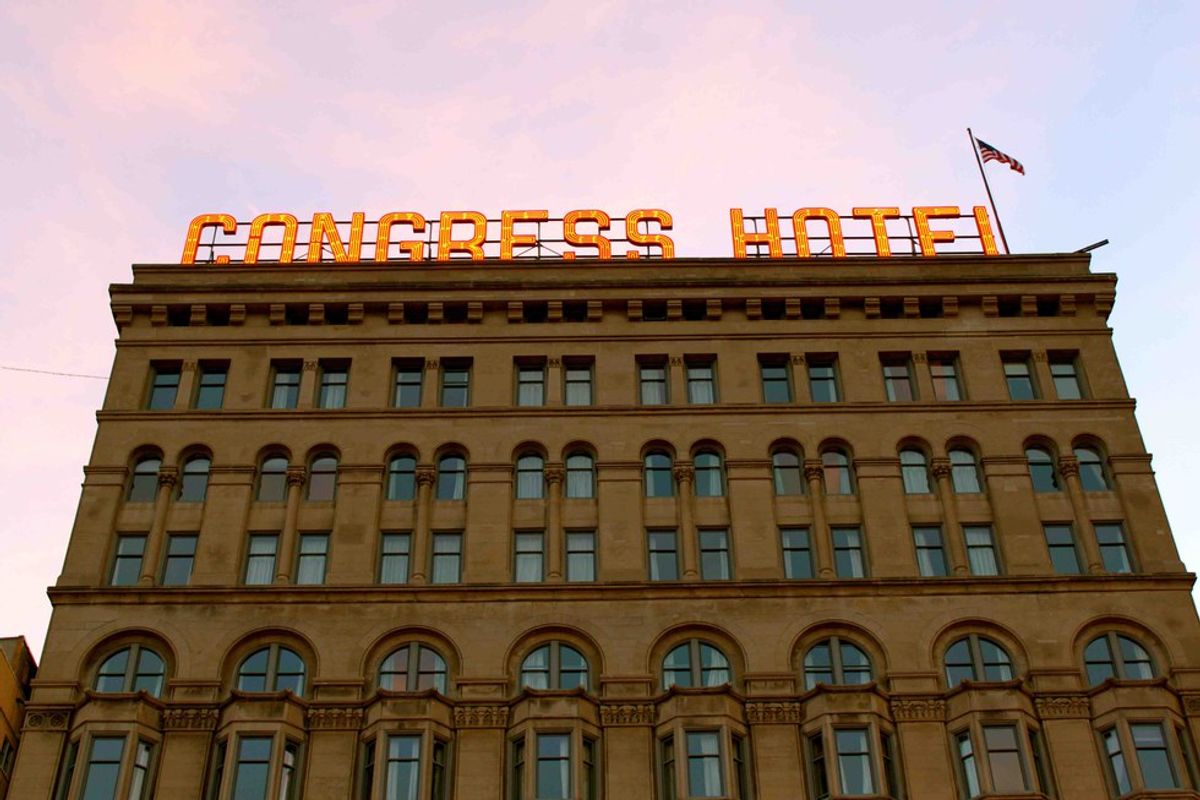 Columbia College students, native Chicagoans, and downtown tourists are all familiar with The Congress Plaza Hotel, an iconic building, historical landmark, and South Loop staple that dominates the view of Michigan Avenue from Buckingham Fountain. Step inside the hotel’s gilded lobby or swanky bar, and you’ll feel as though little has changed since the turn of the century (the hotel was built in 1893 during The World’s Fair, but was completely swagged out by the 1940’s). Its illustrious history and many uses over the years have laden the site with the dark reputation as Chicago’s most haunted hotel, as well as one of the most haunted hotels in the country. It even inspired Stephen King, the world’s most prolific horror writer, to pen 1408, a short story about a cursed hotel room notorious for suicides.

With a violent and tragic past and so many reports of ghostly activity, it’s time to investigate what led The Congress Plaza to become one of the most cursed places in the city. Without further ado, here are the spooky and true occurrences that inspire today’s ghost stories. You may find that history is more frightening than our urban legends.

Al Capone’s ghost has been reported in the hotel bar and lobby for decades now, and he was known to frequent the hotel in his life. Some of his earliest, er, “business meetings” took place at the Congress, and the formerly marble-lined corridors beneath the hotel were used for all kinds of “transporting” (cough smuggling cough) of goods. Several of Capone’s friends and business associates lived at the hotel during the 1920s and '30s, establishing the Congress as the home to some of the century's most violent and corrupt criminals.

A peg legged man has been seen in several locations all over the hotel. Given the nickname “Peg-Leg Johnny,” his real identity remains a mystery, though he is reported to be the ghost of a hobo murdered behind the hotel. While a homeless man was murdered in the alleyway behind The Congress, reports of seeing Peg-Leg Johnny predate the murder. Nonetheless, the apparition is one of the most reported and has been seen in the most locations, including the lobby, dining room, and several of the floors. He apparently likes to turn lights and appliances on and off at random.

The ghost of a six-year-old boy has been seen running around the 12th floor for decades, but the root of this haunting is even more troubling. During both WWI and WWII, The Congress Plaza housed immigrants and refugees from war-torn countries. A young mother from Prague (or in some reports, Poland) was staying at the hotel with her two young sons, waiting for her husband to join them. While awaiting his arrival, her fears of deportation worsened and she eventually had a nervous breakdown. She threw her two young sons from their 12th floor window, and then jumped herself. No sightings of the mother have been reported, but feelings of panic, being watched, and even being chased have been described by guests.

While no one is known to have killed themselves or anyone else in Room 441, this one room is responsible for more calls to the front desk and security than any of The Congress’s 871 guest rooms. Visitors claim to be kicked awake by a “shadow woman,” with objects moving and hearing eerie noises. Though the causes behind this haunting are anyone’s guess, it is creepy enough that all the reports and complaints are so similar in nature.

If you get a chance to visit The Congress Plaza Hotel yourself, keep an eye out for any apparitions and uneasy feelings. The place has seen a lot over the years, and ghosts or no ghosts, the history of The Congress and its connection to the history of Chicago is frightening enough. Enjoy your stay.

Nicole Marie Nigro
Individual Creator
7586
c1.staticflickr.com
Where to start...... Let me start with the cliche that life throws us curveballs and what we do with it is what counts.