The Danger Of The Protest Vote, And Other Thoughts As We Near Election Day
Odyssey

The Danger Of The Protest Vote, And Other Thoughts As We Near Election Day 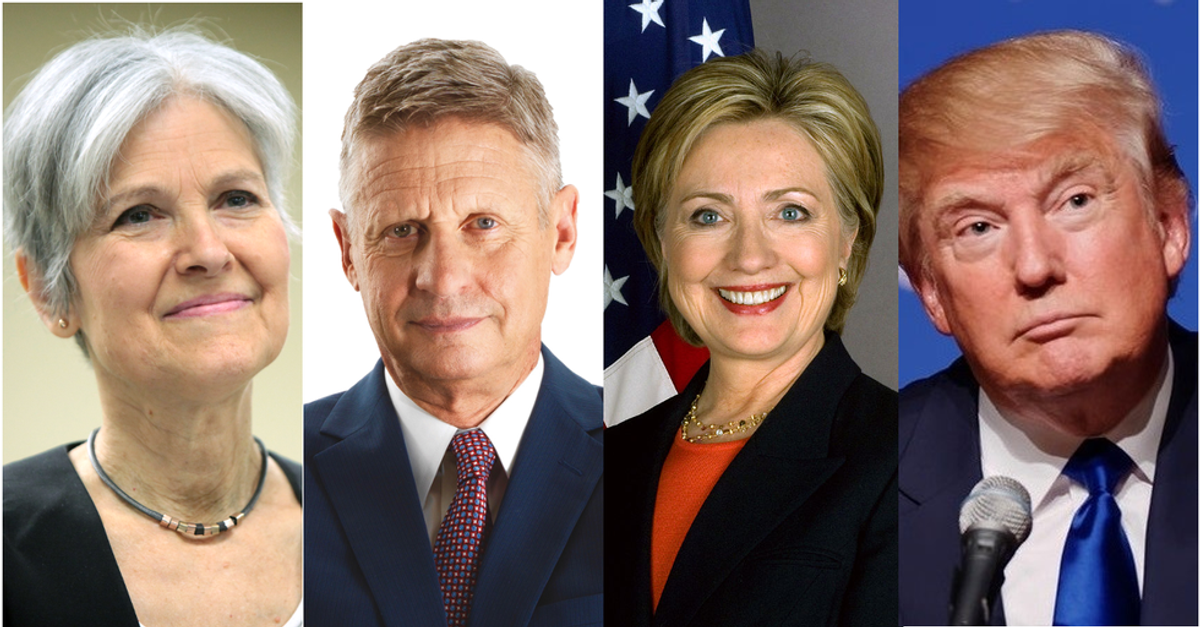 As the end of this election season nears its close, I am sure you all are as exhausted as I am of the absolute circus that has unfolded before our very eyes. I trust that I do not need to go into detail about the absolute asinine nature of the Trump candidacy. There is no logic in his policy, no clarity in his speech, and no place for his rhetoric in even baseline intelligible conversation. I will put more trust into you as a reader than to subject you to any more than we already have been subjected. Picking apart elements of this election that have no real content whatsoever is like trying to eat a sesame seed with a knife and fork, and is now commonplace in our media coverage and political process. What a shame, bigly.

I am an avid Bernie Sanders supporter. I admire his progressive and compassionate policies and steadfast history in fighting for honest beliefs. I was proud to vote for him in the primaries, and truthfully, even shed a few tears when the reality set in that he would not be the Democratic candidate. I am aware of the fallacies and shiesty behavior of Hillary Clinton, but I have not let idealism cloud my judgment in this high-stakes election, and I would implore you to consider this, as well.

The one that got away...

That is just it; this is an absolutely high-risk election. To my horror, in this risky situation, many are ignoring what their candidate Bernie Sanders has said many times over. Explicitly, on CBS, Sanders stated, "This moment in history for a presidential election is not the time for a protest vote," and openly supported Clinton as the presidential nominee. For many, this seems to be falling on deaf ears, and I am encountering many who claim to be opting for not voting at all (squandering of rights), or voting for a third-party candidate as a protest vote.

First of all, what I have learned of Jill Stein, I admire. She is tenacious and smart, and I wish that her candidacy had accumulated more momentum. But it did not, because we are stuck in a bipartisan system. Wishing that this was not so, does not change it. I wish she was a viable candidate, but she is not. These are facts. Even so, were it another election, with an actual viable candidate on the Republican ticket who doesn’t threaten the very well-being of each citizen of this country and beyond, I may consider voting Green. This is not the time. There is no chance that a written-in candidate, or a third-party candidate, will win this election, so what point is being proven? That we can divvy up the blue vote because we are mad at Hillary Clinton? A woman who has literally served the public her entire life, and voted in sync with Bernie Sanders 93% during their two years in the Senate together.

For those who supported Bernie and are now supporting Gary Johnson, I don’t understand you. Sure, Johnson seems like the kind of guy you could smoke a blunt with, probably because he has made that his focal point of a lot of his political moves. Additionally, he not only flubbed publicly by not knowing where or what Aleppo was (cringe-worthy), he then colloquialized the tragic situation by labeling another stoner blank “an Aleppo moment.” This is all after whining about not getting enough opportunities to speak publicly.

He believes in big money in politics (Citizens United), is not opposed to fracking whatsoever, is opposed to paid medical and family leave, believes that the current minimum wage situation is a “non-issue,” and believes there should be NO RESTRICTIONS ON FIREARMS (with the gun violence climate and mass shooting record in this country, it makes my blood boil that anyone would have the carelessness to claim this. Read any stats on the matter -- any). There are many other policies and half-baked opinions I could rattle off, but I think you get it. Gary Johnson is a dud and won’t win anyway. Moving on…

Gary Johnson, embodying, as usual, the moment in class when you raise your hand but you actually have no idea what is happening and you haven't read the book. Nice one, Gare.

Turning to those considering a protest or non-vote, disgruntled with this election as a whole. Me too, guys. However, I would implore those of you resistant to the obvious choice of the election to consider your privilege. What a Trump presidency would mean for minorities of any kind supersedes any qualms you may have about Hillary Clinton, and not acknowledging that is ignoring the role that a president does play, and likely the freedom of thought, allowed by the comfort of your own privilege. Are you mad that Hillary sounds more and more like Bernie? WHY?! She is listening to what the people want, which is what a politician is supposed to do. Furthermore, a unified blue vote is imperative to move past this nightmare, and set the stage for the revolution that we all desire to unfold. This is not a time to pout or stand idly by; strategic movements forward are paramount, because somehow we are here. Remember what Bernie said, “This is not the time for a protest vote." Our wheels are in motion, but we still have to get this thing out of the woods.

Let the record show that I will gladly speak with any Trump supporter about their views on policy and aspirations for the prospective president -- my full name is listed in this article; you can message me on Facebook. I eagerly await our discourse.

Caitlin Marie Grimes
University of South Florida
3247
Beyond The States