Immigrants Deserve Credit For Their Effort To Find A Better Life

Even though they might be working below the surface, blending into the background, these new Americans are the embodiment of perseverance. 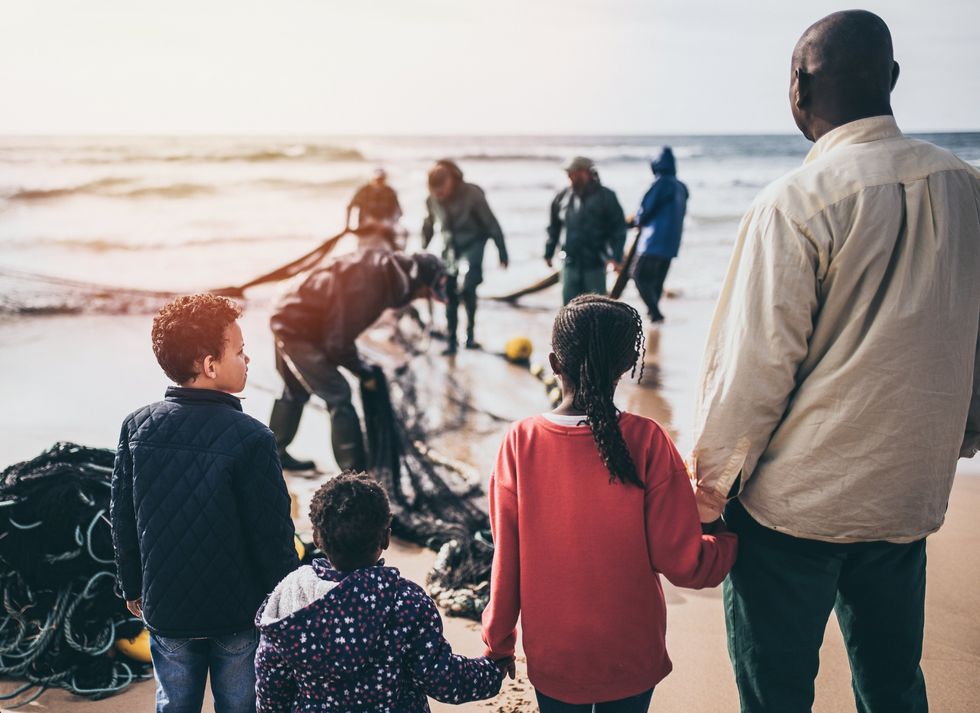 I'm so honored to be a part of Odyssey, to be given this platform to voice my thoughts and my experiences. Because I have this privilege, I want to use it to applaud those who have persevered, and who continue to every day. People who persevere under the radar, without recognition. People for whom perseverance is not a choice but a necessity, a way of life.

According to the American Immigration Council, one in eight US residents is an immigrant. And one in nine residents is a native-born US citizen with at least one immigrant parent. In my county in New Jersey, the immigration index is even higher: Foreign-born residents make up almost a third of our county's population.

I am a big fan of ethnic food, so I like to get Korean or Colombian food on the weekend from some local immigrant-run restaurant. If I like the food, which I always do! I look them up online and see what they're all about, their back story, whatever. But a lot of the time, I don't find much.

But most of these places don't have websites or social media at all. Some of my searches even turn up these disgruntled comments, like, "Why don't these people have social media? Why don't they have an email? I can't understand their menu."

And it's cute, right. The owners of the restaurant or store you're talking about, they just moved here from Central America or Eastern Europe or Southeast Asia. They may not speak English. Some of them moved because there was nothing for them or their kids back home, or because they were in danger. And now they're operating their own business. I mean, the average American couldn't do that. And you expect them to have an Instagram.

The thing is that we do, though. We're used to businesses advertising and catering to us with social media and websites, so we get annoyed when a restaurant doesn't have all their info handy and ready to go online. We say, Next, we move on, that's it.

But we need to level the platform so immigrant-run businesses have just as much chance to succeed. So they're not skipped over. So they can access the services they're entitled to, so they can publicize and tap into a more diverse clientele, instead of one that is limited to their own cultural communities or their family.

Through my culinary travels throughout New Jersey, I've met a lot of immigrant-run restaurants that had business models they wanted to introduce in America, but they didn't have the resources to maximize and spread out. They needed help with (or access to) technology. They needed help with conversational English.

I've also heard some incredible ones. I've been stunned, and I've been inspired. I've heard about families separated across time zones and continents. Businesspeople, people with degrees, people who were wealthy, working these menial jobs in the US. Parents saving every penny for their children to do the things they never could back home.

These are the stories of the average immigrant, but they're even more compounded by the trials and tribulations of putting yourself out there and starting your own business in a foreign country.

In an age when our own government is actively condemning and demeaning immigrants, it is so important to recognize how impressive their perseverance is. They start a brand-new life in a country that makes it very apparent that the odds of success are against them. Because of language barriers and cultural differences, they are, in a lot of ways, disadvantaged. They're more susceptible to poverty, racial profiling, domestic violence. They're treated like second-class citizens.

But even so, they are still hardworking, persistent. They're brave beyond belief. They have guts and incredible motivation. Even though they might be working below the surface, blending into the background, these new Americans are the embodiment of perseverance. It is their time to shine.

immigration
Report this Content
This article has not been reviewed by Odyssey HQ and solely reflects the ideas and opinions of the creator.

It'll work out for the best, just be yourself.

90s kids, rejoice because this is the best thing 2020 has given us.

Now, this is a story all about how, "Fresh Prince of Bel-Air" is getting a reboot, and every '90s kid is currently screaming. (Yes, you heard me correctly.)

Ending it with a mini-moon is a plus!

With no sign of the pandemic going anywhere, brides and grooms who planned to be married in 2020 are forced to opt for plan B — if not plan C or D. While some are downsizing their in-person weddings to meet coronavirus guidelines and state restrictions, others are choosing to cancel theirs until further notice and some, well, they're embracing the virtual "I do."

A few weekends ago, I had the pleasure of attending a Zoom wedding for my friend and fellow editor and writer, Kristin Magaldi, and the short-but-sweet ceremony left me in happy tears (surprise surprise). In order to get the scoop on what exactly went into planning a virtual wedding, I asked Kristin to share her best tips so other couples know exactly how to have a Zoom wedding in case they're looking to lean into the video chat vows, too.

In case you needed another reason to get the Prada sunnies you've been eyeing all year.

Since I can remember first flipping through my older cousin's fashion magazines as an 8-year-old, I've always had several luxury items on my wish list of items I knew I'd never have, but loved to fantasize about.

As I grew into financial independence later in life, the list grew longer, but the ways in which I could toy with my grocery or travel budget for a month to make room for something I really wanted made the items on it more attainable. Even then, I will (virtually) visit an item online several times in the span of a year to test if I still like it months after eyeing it, and to see if by any chance it may have gone on sale.

You Don’t Need Permission To Have Feelings, Those Emotions Are There For A Reason

Those feelings are normal and natural.

With school starting soon, those that are going off to college are saying their goodbyes and moving in or buying school supplies to prepare to start the next school year. There's a whole lot of feelings involved more so this year than any other.

To The Girl Who Hasn't Found Her Confidence Yet, It Will Come, But You've Got To Put In The Work

You are enough, you've just got to keep reminding yourself of that.

I know it's hard. You are a beautiful, powerful woman and no one should ever tell you differently. Sadly, there are ones out there that feel that they are empowered to break you down and I wish I could tell you that it will be an easy journey, but it is one of the hardest things that I have ever done. I want to start off by saying the most cliché thing that you will ever hear but trust me it is the truth!