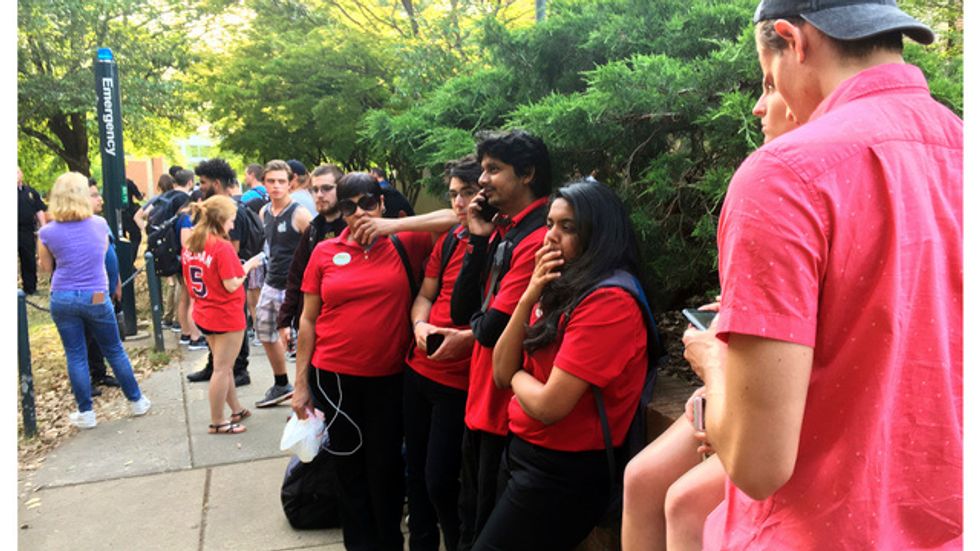 Attending the University of Texas at Austin, you are entering the university knowing the vast amount of diverse groups that make up its student body. People from all races, ethnic origins, political and religious beliefs, sexual orientation, socioeconomic backgrounds, etc. However, this is a school in the south. A school whose city (Austin, Texas) has been historically known to segregate and discriminate between races. A city that, even though it boasts about its growth and diversity, actually is blind to its discriminatory practices.

Apart from Greek life here at UT-Austin, there is a need for educating its people about racism in a college campus. I think we as young people attending any campus whose student bodies are made up of different origins, are blind to that, and only focus on each other, which we are all mainly part of one race: Caucasian.

Yes, we have sororities and fraternities that have students of other races/ethnic origins, but the fact and umbers are clear: one specific race dominates all the others, and it is highly visible and observed by many others.

I felt that, as a student who has been educated within the realm of racial issues, I am not fully knowledgeable about the feelings and observations of other students looking at the organization I may be apart of. I have been called names myself and made fun of because of the people I hang out with, because it may be all one race, or because I may not hang around people that are my ethnic origins (Hispanic), and hear time and time again how bad sororities and fraternities are based on people who automatically judge based on color and race.

People, it is 2018. Move on from the past, look beyond into the future. We must try and include each and every person as who they are, not judging based on color. It is time to work towards an inclusive environment making anyone, no matter race, accepted for who they are.

Race on a college campus

Q: What is my take/observation?

A: Well, first off--the university I attend is made up of a diverse student, staff, and professor population stemming from every race, ethnic origin, socioeconomic status, political/religious beliefs, sexual orientation, etc. However, I believe its population still struggles with accepting one another when put into direct/indirect contact where it is in a classroom, stroll through campus, or an organization.

Before attending UT, I thought growing up in a border town and part Hispanic, I understood the concept of racism and discrimination of people, however, my first year completely immersed me in a culture shock and jolt of reality which I was never prepared for. I actually had ZERO clues about what inclusion was, the types of sexual orientations that exist, and the harsh reality of racial prejudice that exists in our country, in the workplace, directly on a college campus, and shocking of all: in my hometown.

As a junior in college, I have moved away from my naive misconceptions, have tried to educate myself in the area of racism and discrimination, and honestly, I still struggle with the ability to not judge someone I encounter without knowing about who they are, what they stand for, and their background.

Q: How is it on my campus? What do you mean? What is your point?

A: As a member of the Greek life, I am automatically placed in the category of "typical sorority girl" based on my hair, eye, and skin color, and the Greek letters I wear. They automatically presume I am some rich, spoiled white girl from a high-income suburb. Well let me tell you, I am a Hispanic woman coming from a small border town in Texas, raised in Mexican-American culture. People judge me before understanding who I am and where I come based on the stereotypical sorority girl persona that exists among students on college campuses. And that is what my point is. We are quick to judge people based on a stereotype that may exist or their appearance, the way they speak, and the clothes they are. We all struggle with it, I know I do, and subject to being placed in a stereotype, it is hard not to subject others to a stereotype I have in my mind.

Until we can understand and reflect where we come from, and begin to stop the quick judgments of other people, then we can begin to work towards cultivating an environment filled with societal acceptance of people for who they are as people. Collectively, it does not matter your color, orientation, background--we all belong to a society in which we are quick to judge each other based on pre-conceptions we hold, or because they may not look like you or belong within the same group as you.

People it is 2018. Let us work on accepting each other for who we are as people. Working together within an equal and accepting society will create a positive impact on each and every one of your lives.

Reflect on yourself--where do you come from? Why? Who are you as a person? Once you have figured that out, walk around and with each person you encounter, think about where they may come from, who they may be, and figure it out before you choose to not accept them, associate yourself with them, or judge them.

So, lets make our college campuses a place of acceptance for everyone. :)

Once we can do that, imagine the direct impact it will have on our society, country, and thus, our world, as a whole!