Here's Why Chris Evans is a Real Life Superhero

Here's Why Chris Evans is a Real Life Superhero

All I'm saying is, you've never seen him and Steve Rogers in the same room. 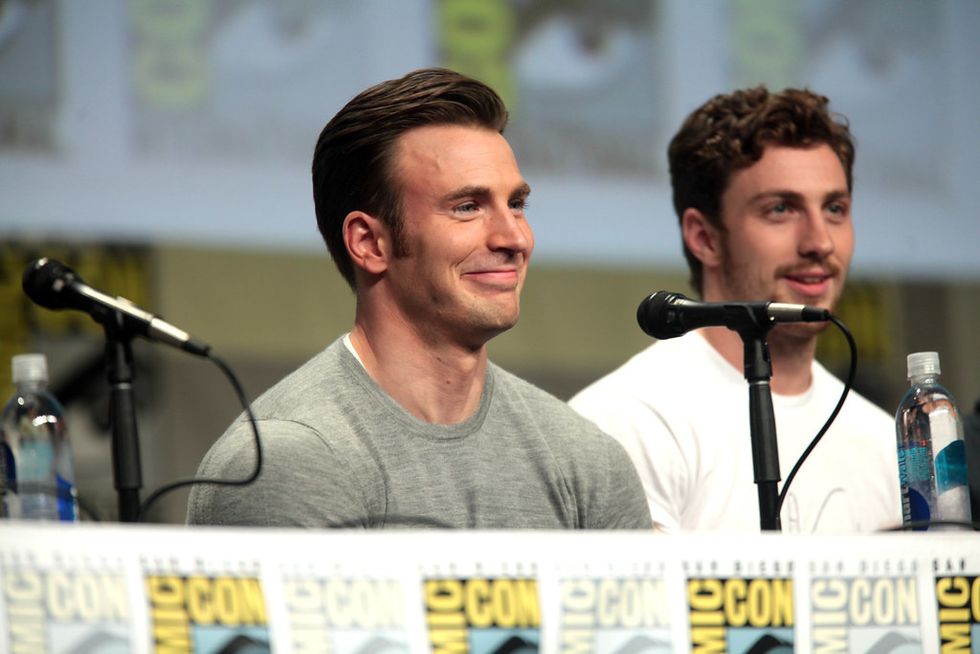 As far as I know, everyone has a hero - that is, at least one hero. It doesn't matter who, how, or why, but everyone has that one person (I'm mostly talking about celebrities right now) that they admire more than words can possibly say. dodie, a singer / songwriter from the UK, was recently asked on twitter (here) who her ultimate role model was, and she talked about why she looked up to Russell Brand so much. It got me thinking about who I admire and why I admire them so much. After a lot of thought about this question, I found my answer. If it isn't already evident by the title, one of my biggest role models in life is actor and director Chris Evans.

I think some people have a very rigid idea of what someone has to do or who they have to be to be considered a hero or a role model. But in my mind, I think what constitutes a hero is an extremely personal criteria and different actions mean much more or much less to other people depending on who you ask. And if you ask me, Evans fits the mold.

Let's remove the fact that he's Captain America for a second. Even if he never played Steve Rogers in his career, he does so many other things that are worthy of being hailed a role model and hero. One look at his Twitter account, for example, shows a man who deeply cares about the state of the nation and the world, and is constantly looking for ways to improve it. On his account he is constantly sharing important and educational media about a wealth of topics that we all should be aware of, such as the crisis at the border (here), the ridiculous "straight pride" event in Boston (here) and (here), retweeted an interview on obstruction of justice from Trump (here), the strict abortion ban in Missouri (here), and the crisis in Sudan (here). These are just a few examples of Evans' global awareness that we should all emulate and not be afraid to speak out upon. To recognize the urgency needed today to take action and speak out about the injustices going on in this world and to have the compassion to seek out ways to combat that injustice, to me, is what a hero looks like.

But let's bring back the fact that he's Captain America, because it has given him a platform to make a difference in communities. Marvel launched him into major stardom - which enabled his Twitter to amass a 12.5 million people following - and gave him the ability to make the lives of children better. Frequently, Evans makes the trip to various Children's Hospitals dressed as Captain America to cheer up some of the children and make their dreams of meeting a real-life superhero come true (you can read about one of those times here). It is clear to see that he's a good guy who genuinely cares about the people who support his career, especially children who look up to him as a beacon of light for how to be a good human being. I admire his compassion and empathy when it comes to giving back to people who help give him the career that he has (although with talent like his, it isn't hard for all of us to want to support him!)

So he's well informed and he cares about being a part of communities and supporting - for lack of a better word - ordinary people like you and I; what else does he do? I wrote a piece a while back about his mental health advocacy and it was the start of my admiration for him. Mental health advocacy, for me, is one of the most important issues in my life for me personally and for the people I know personally. It's one of the reasons I love Carrie Fisher so much, because she was such an outspoken proponent of breaking down the stigma against mental health issues. When I see anyone proclaiming their support for mental health advocacy and the elimination of stigma I can't help but to cling onto them like a koala to a tree.

The piece I wrote about a while back was about an interview Evans gave about his experience with anxiety and depression and how it really resonated with me. I sort of forgot about it for a while, even about the advice he gave and lost myself a bit, but I recently read over the article again and watched the video and it woke me up about how important that video was and is. We don't really acknowledge how much we rely on celebrities to make us feel like we are valid in our feelings, especially as kids and young adults, so when celebrities are open about their struggles, whatever they may be - in my case, about their mental health struggles - it has the ability to change the world. That sounds dramatic, but I'm serious! Sometimes hearing a celebrity - someone we unfortunately like to think is perfect all the time and so unlike us - talk about how they struggle makes us feel a little less alone in our troubles. Certainly, watching Chris Evans talk about his trouble with his mental health made me feel a little less alone, and a little better about figuring out how to get through my own struggles with some sage advice.

So maybe Chris Evans doesn't have the physical strength of a super-soldier, but he has the strength of character that we should all strive for. I can't speak for who he is personally, but from what he puts out publicly, Evans seems like the kind of man Steve Rogers would be proud of, and speaking of which, that makes me proud to call him one of my biggest role models. So thank you, Mr. Evans, for being the real-life Captain America.

Madison Franz
The Narrative
1113917
Photo by Brooke Cagle on Unsplash

Madison Franz
The Narrative
652652
Photo by Manny Moreno on Unsplash