No, Candace Owens And Ben Shapiro, Harry Style's Dress Is NOT A Marxist Plot To Destroy Manhood

A pop star wearing a dress on the cover of Vogue is actually not a Marxist plot to destroy men. 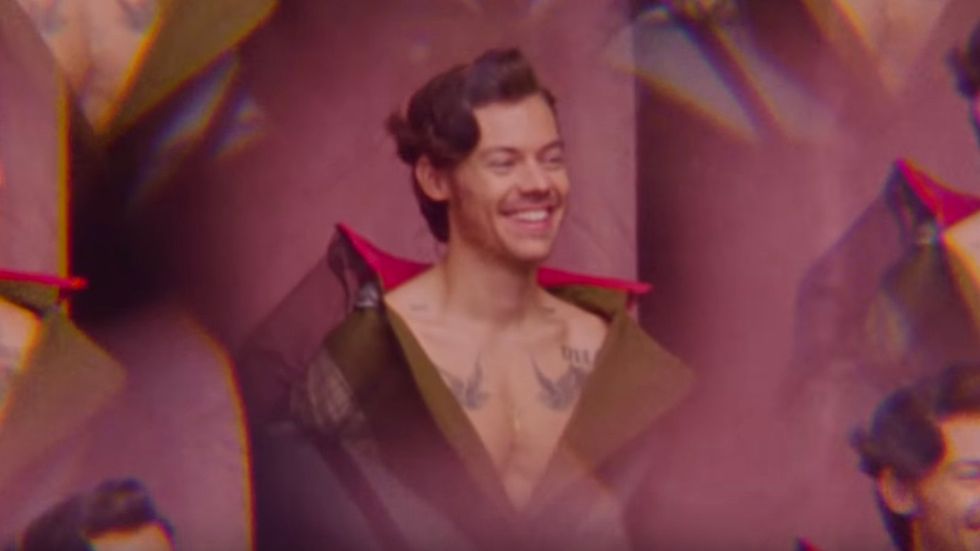 With the president of the United States refusing to concede that he lost an election and the COVID-19 pandemic rapidly worsening, conservative commentators Candace Owens and Ben Shapiro took time out of their busy schedules to address the most pressing concern facing the world right now: Harry Styles' Vogue photoshoot.

There is no society that can survive without strong men. The East knows this. In the west, the steady feminization… https://t.co/0ArvBaazmr
— Candace Owens (@Candace Owens)1605381388.0

This is perfectly obvious. Anyone who pretends that it is not a referendum on masculinity for men to don floofy dre… https://t.co/xo2GqTIztv
— Ben Shapiro (@Ben Shapiro)1605536516.0

Owens and Shapiro were promptly laughed at by just about everyone on Twitter for this take, and rightly so — it's ridiculous. But their views on gender and clothing are more prevalent than the online reaction reflects, so let's talk about them.

In his attempted "gotcha liberals" Twitter thread, Ben Shapiro tried to argue that the fact that Harry Styles was celebrated for his Vogue cover proves that its point was to "feminize masculinity." So let's make a couple of things clear. People celebrated Harry Styles for his Vogue shoot first and foremost because he looked good in it. He's wearing high fashion on the cover of a fashion magazine. For most people, myself included, the pictures just were not that deep. The clothes were cool. The photos were nice. That was about it.

But (as much as I hate to admit it), Shapiro does have a point that some of the attention directed at the photoshoot was because it subverted gender roles.

Where he's wrong is that this was some covert ploy to "feminize masculinity."

A man wearing a dress on a cover of a magazine is, even in 2020, still a subversion of traditional gender roles (although someone might want to tell Candace Owens and Ben Shapiro that male pop stars have worn dresses before — they seem a little too shocked right now). But people aren't celebrating the Vogue shoot because it's "feminizing masculinity." The point of subverting archaic gender roles isn't to make men "more like women" (or, vice versa, to make women more like men).

The point is that it's ridiculous to judge someone's worth as a man by something as trivial as clothing.

When Candace Owens says that "society can't survive without strong men," she's clearly saying that she doesn't think a man can both be strong and wear a dress. Subversion of gender roles in fashion points out how ridiculous of a statement that is. How strong could someone possibly be if all it takes to make them weak is a piece of fabric in a certain shape? If anything, isn't it stronger to have the confidence to wear clothing that you know people like Candace Owens will ridicule you for? Doesn't that show more confidence and strength of character?

If all it takes to make men "weak" is for them to look fantastic in a dress, then they were never that strong to begin with.

I'm not saying this to try and set up Harry Styles as some kind of pioneer of gender-neutral fashion. The very Vogue tweet Candace quote-tweeted quotes him as saying that he's never "thought too much" about what his clothes mean. And that's the point. It's not a ploy by the "Marxists" to ruin masculinity (and I'm more than a little tired of commentators like Owens trying to instigate a third Red Scare with this ridiculous narrative). It's divorcing our ideas of what being a man (or a woman) from something as inconsequential as clothing.

I'm far from the first person to point out that Candace Owens spends a lot of time wearing a suit. A couple of decades ago, that would have been as unacceptable as the Vogue photoshoot about which she's currently up in arms. I'm sure Candace doesn't think her clothing makes her "less of a woman," because it so obviously doesn't. It does, however, show that she's clearly on the wrong side of history and almost impressively un-self-aware about it.