Black Lives Matter to Desis, Too
Odyssey
CurrentlySwoonLifestyleHealth & WellnessStudent LifeContent InspirationEntertainmentPolitics and ActivismSportsAdulting
About usAdvertiseTermsPrivacyDMCAContact us
® 2023 ODYSSEY
Welcome back
Sign in to comment to your favorite stories, participate in your community and interact with your friends
or
LOG IN WITH FACEBOOK
No account? Create one
Start writing a post
Politics and Activism

Black Lives Matter to Desis, Too

An open letter to the South Asian community on why we should support the causes of Black Americans. 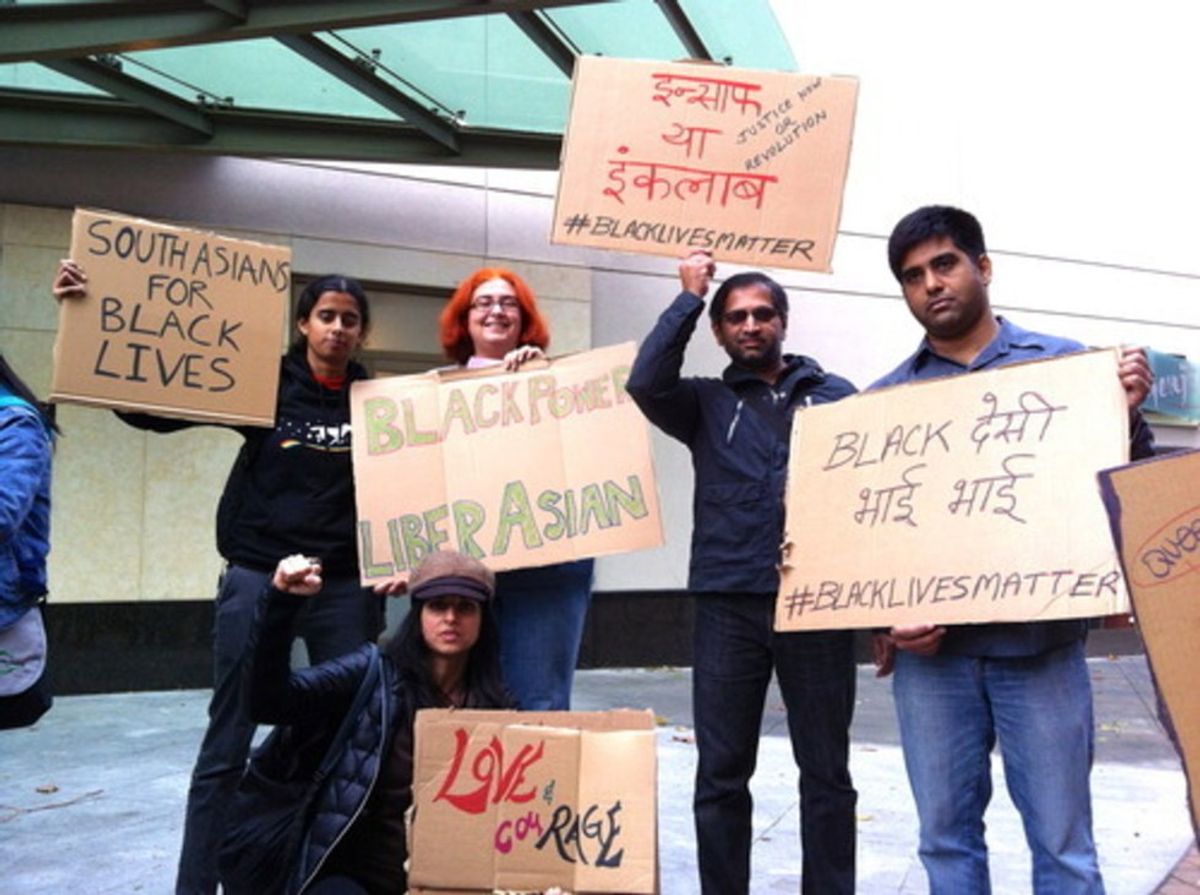 This letter is part of a project started by several Asian-American activists, known as Letters for Black Lives. In light of the shootings of Alton Sterling and Philando Castile, they decided to organize to combat attitudes of anti-Blackness within their own communities, writing a crowdsourced open letter on why "Black Lives Matter" to Asian-Americans as well. Upon reading it, I was extremely impressed and felt the project could do more to appeal to South Asian-Americans.

I drafted the initial version of the letter, but the final version was edited by 12 other contributors with regards to content as well as grammar. This certainly wouldn't have been the way it was without their help.

Some of us have our own personal experiences with the police and/or Black Americans; this could be an entry point to the rest of this letter for when you share it with others (especially those who immigrated to the US).

We need to talk.

In school, we learned about Black leaders such as Martin Luther King, Jr., Rosa Parks, and many others who fought racism in America during the 1950s and 60s. But their work is far from complete. Recent events show how dangerous it still is to be Black in America.

American police have already killed more than 500 people this year. Of those, 25% have been Black, even though Black people make up only 13% of the population. In early July in Louisiana, two White police officers killed a Black man named Alton Sterling while he sold CDs outside a convenience store. The next day in Minnesota, a police officer shot and killed a Black man named Philando Castile in his car during a traffic stop.


Overwhelmingly, the police do not face any consequences for ending Black lives.

When we see these stories in the news, it may seem like it’s not our problem. That's because American culture portrays Black people as thugs and criminals. Our negative attitudes toward Black people may also be influenced by prejudice around skin color or caste that exists within our own communities.

But stereotypes can be misleading. We want to share another point of view with you: why we should stand with Black Americans.

In fact, stereotypes directly impact members of our community as well. The media shows us as foreigners with thick accents. We get called names in schools and on the streets. Airport security stops us, and some of us are profiled as terrorists because of our clothes or our religion.

Sometimes, anti-Black racism also puts us in danger. In 2015, Sureshbhai Patel came to Alabama from India to care for his grandson. He was taking a walk outside when a White neighbor called 911 to report a suspicious "skinny Black guy" on the street. The police went on to assault Mr. Patel, who spoke little English. He was left partially paralyzed, spending months in the hospital. The police officer was never convicted of any wrongdoing, even though the entire incident was captured on video.

Incidents like this occur regularly for Black Americans. And they face racism on an even more appalling level— a level built into their daily lives. This racism is all the more difficult to combat because it is embedded in the very foundations of American society and institutions.

We benefit from many of these institutions ourselves. The American government was primarily created by slaveholders, and the foundations for its economy were built on slavery. Many Black Americans are descended from slaves who experienced brutal mistreatment as their owners reaped massive profits— one of the greatest atrocities in history. Today, America continues to fail Black Americans, who face disproportionate rates of imprisonment, poverty, and drug abuse, unequal access to education, employment, and housing— and threats of violence.

But here’s the secret our community was never taught: our presence in the U.S. is linked to the work of Black activists. Up until the 1960s, racist immigration laws allowed only 100 immigrants from countries like India into the U.S. per year. But during the Civil Rights Movement, Black Americans used protests and civil disobedience to help remove some of the most racist laws in the U.S. not only for themselves but for all minority communities.

But that wasn’t the only major victory of Black activism. It led to lawmakers examining prejudice in many other areas, one of which was immigration policy. The new immigration law of 1965 removed the racist quotas, allowing some of us to come to the U.S. much more easily. There are 4.5 million South Asians in the U.S. today. We have been able to build a community here thanks to Black activists who helped remove major barriers for us.

We are thankful for how you have worked to secure better futures in this country. However, not all Americans have equal access to futures like ours. The police have murdered countless Black Americans, like Rekia Boyd, Michael Brown, and Eric Garner. But none of these police officers have been sent to prison. This shows us that the police and the courts don't value Black lives. (We may be harassed, profiled, or called names—but it’s unlikely that a confrontation between an unarmed member of our community and a police officer will end with us taking a bullet.)

Can we really be allies to Black Americans? We just have to look at history. More than a century ago, Sri Lankan and Indian religious leaders visited the U.S. and spoke out in support of Black Americans. In the 1950s, Indian freedom fighters shared nonviolent civil disobedience tactics with Black civil rights activists. In the 1960s, Pakistani Professor Mirza Hamid Kizilbash challenged racial segregation in Jackson, Mississippi. Today, many of our community members are starting to support movements like Black Lives Matter. We can choose to continue this 100-year tradition.

Our culture teaches us to stand for justice. We hope that you will join us in supporting the Black Lives Matter movement, and the Black Americans to whom we owe so much.

If you would like to participate in the project, here's a list of ways in which you can help out. You can also contact those who are involved at lettersforblacklives.slack.com.