Music's biggest night was filled with some very special moments. 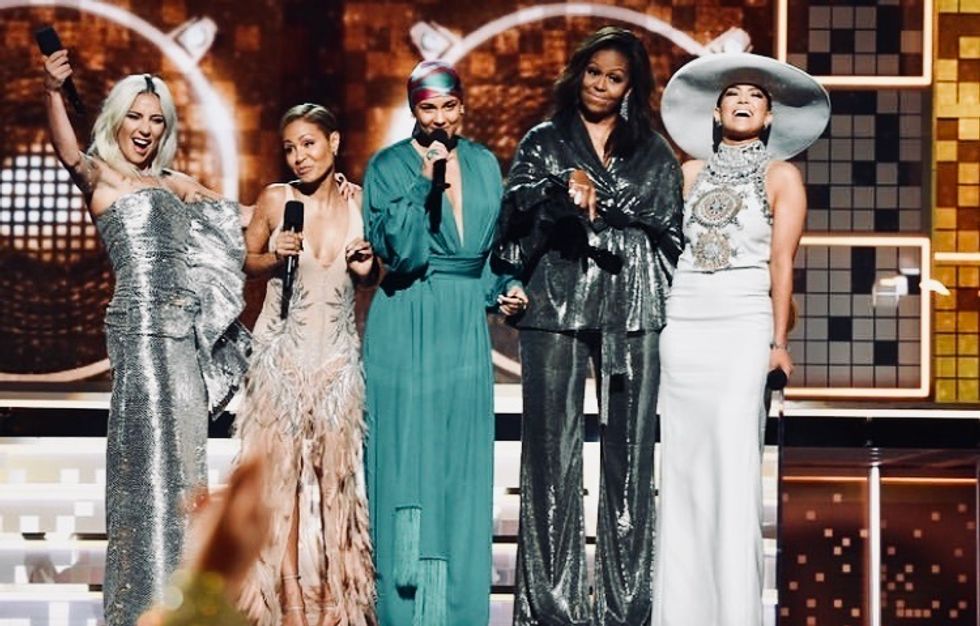 It's finally awards season! This year, the Grammy Awards was filled with twists, turns, and many guest appearances. There was an abundance of new winners, many of whom made history, as well as performances that were unlike any others from the past. To relive one of music's biggest nights, here are Sunday night's best and most memorable moments.

The Cuban-American singer kicked off the night with a fresh performance of her hit song "Havana." Surrounded by colorful set pieces and an array of diverse dancers, Camila was joined onstage by Young Thug, Ricky Martin, and J Balvin. A newspaper that read "Build Bridges Not Walls" was held up by J Balvin before he began singing "Mi Gente," making a political statement only a few moments into the show.

Four powerful women entered the stage as Alicia Keyes' right-hand ladies, including Lady Gaga, Jada Pinkett-Smith, J-Lo, and surprise: Michelle Obama! The audience went crazy when they saw her enter the stage, and her speech about how music helps people connect and share their stories was beautiful and true.

Grammy rehearsals have sparked a new friendship from these two and I am here for it. Shawn began his first ever Grammy performance behind a piano, turning his Rock and Roll hit "In My Blood" into a beautiful ballad.

Halfway through the song, he grabbed his guitar and met a special guest onstage: Miley Cyrus! Viewers' hearts melted as the pair belted out the final note so perfectly. Collaboration in the future, perhaps? Let's hope so!

Alicia Keyes revealed that when John Mayer won the Grammy for Song of the Year over her 15 years ago, he broke the award in half and gave the second piece to her. He believed she deserved to win as well, so the two now share joint custody of the Grammy. How sweet!

Miley's rendition of the Dolly Parton hit was my anthem back in 2012. Hearing her sing it again, but this time with the legend that the song belongs to, was something so special. It was definitely a duet to be remembered.

Alicia showed off her pipes by singing a mashup of all the different songs that she wished she had written herself. Her performance was done by not one, but two pianos. Her talent is too much to handle.

7. Dan and Shay show off their talent.

"Tequila" should win all the Grammys. This country duo proves time and time again just how insanely talented they are. Their acoustic version of their hit song was ended with the most beautiful and insanely long high note that will go down in Grammy history.

Drake took home the Grammy for Best Rap Song and his speech was one that no viewer will forget. He suggested that musicians don't need a Grammy to feel like they're successful and revealed that the music industry is just opinion based.

"You've already won if you have people who are singing your songs word for word if you are a hero in your hometown. If there are people who have regular jobs who are coming out in the rain, in the snow, spending their hard-earned money to buy tickets to come to your shows, you don't need this right here. I promise you, you already won."

Every year, the Grammys recognizes an educator that has made a significant contribution to the field of musical education. This year's winner was Jeffrey Redding, a high school teacher in Orlando, Florida. This award is a beautiful way of recognizing how important teachers of the arts are to our education programs.

Cardi B won Best Rap Album and became the first solo female artist to win the award. Cardi was the only woman nominated in her category, making her an icon to women in music everywhere. She was filled with nerves when giving her acceptance speech, which proved just how grateful she was.

11. A tribute to Aretha Franklin.

After the passing of the Queen of Soul this year, the Grammys put together a tribute for her featuring an array of talented artists. Aretha has left behind a legacy that no one will ever be able to forget about.

The rest of the awards season awaits! Oscars, Tonys, and Emmys: here we come.