'Barbarians Rising'...To Be Burned By The Sun

'Barbarians Rising'...To Be Burned By The Sun

Mercy and this mini-series are for fools. 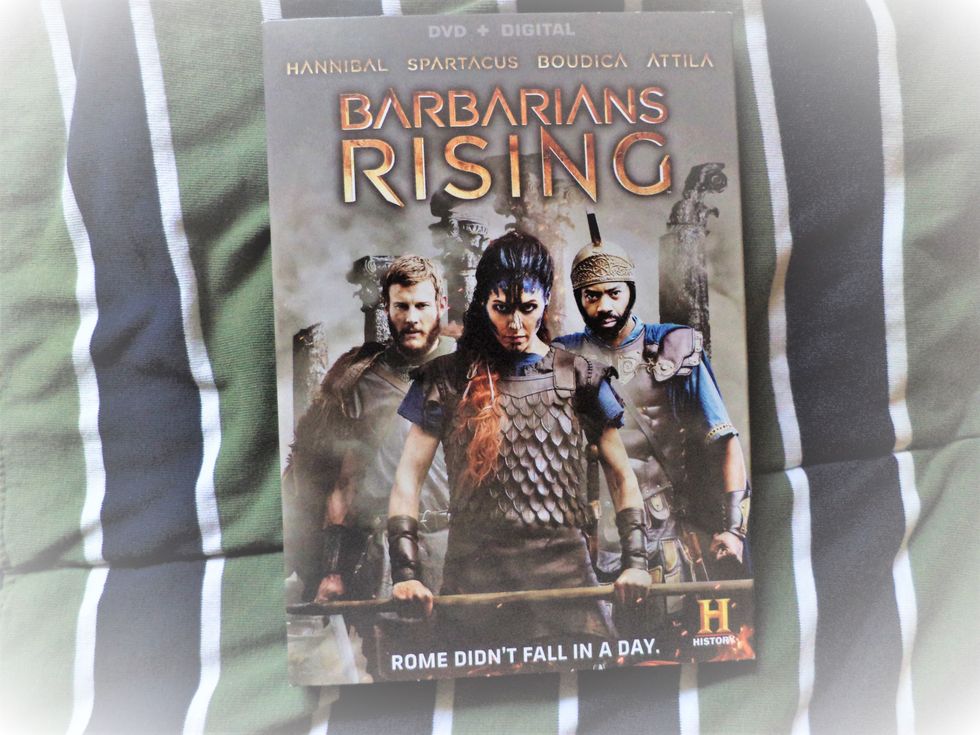 "Friends, Reh'omans, Baw-bah-ree-uns, countrymen, lend me yoh ee-uhs," said Antony with his chin in the air, wearing my centurion helmet. "I come to bury this mini-series, not to praise it. The evil that men do lives awf-tuh them; the good is oft inter-red with thay-uh bones."

Just like how this series ended in 2016, what good it had rested within it while the evil seems to pervade, and by evil I mean misinformation and boredom. This will not just be a review (at least not like the reviews I did in the past), rather a deeper analysis of what went wrong with this docudrama, aesthetically and historically. The reason why I am passionate about writing this article is because this mini-series. Even for a few episodes, this series still had the responsibility of educating the public about the Barbarians.

Of course, the lack of recorded documents left room for cliché moments like the villain circling around the hero, the sadistic character taunting his victims, the leader giving off his heroic speech, and (I must say this) an Emperor Joffrey. Speaking of which, this mini-series was trying too hard to imitate "Game of Thrones," in terms of putting in the dark themes that are typically associated with it. Even the actors who played Ser Meryn Trant and Dickon Tarly starred in this mini-series.

Playing into the dark themes of Boudicca's episode, she snapped the neck of a crow, which may not have happened. Cassius Dio, a Roman writer, did explain that Boudicca prayed to the Celtic war goddess Andraste with a rabbit between the folds of her dress. So why couldn't Boudicca just whisper her prayers to a rabbit she was holding instead of attempting to appear ruthless without some need to keep pace with Game of Thrones? Did there also really need to be drama with Alaric losing his sister? Did Alaric even have a sister? If there must be characterization, the History Channel could have made Alaric's internal conflict about wanting to find a place to call his new homeland or whether to just take Rome itself, because of the fact that he belonged to a nomadic Germanic confederation of tribes.

Glaring parts of the mini-series that were missed were the Barbarians who actually changed the tide of Western Roman history who were left out. These include Odoacer, the Barbarian king who officially overthrew the Western Roman Empire in 476; Clovis, who founded the Frankish kingdom; and Arbogastes, who was a Frankish guard for Emperor Valentinian II who was debated to have personally killed him. Hannibal's Carthaginian Empire, I highly doubt, would have been part of any oppressed group since they rivalled in power to the Roman Republic.

I was more interested in the scholars and famous people who provided commentary in this mini-series than the actors. You would think those would be the boring parts, but they provided more context and fascination than the narratives did. It is a tragic disappointment both as a historical work and as a narrative work.

If there were any parts that I liked, I did like the scenery of the Vandal Kingdom, since the hazy, yellow African-Mediterranean fog juxtaposed perfectly with the Roman architecture. I also thought that the actor who played Geiseric was genuinely menacing and I would definitely picture the real Geiseric being as menacing as he was towards the Catholic priests. It would have been hair-raising to hear Richard Brake snarling in Vandalic or Latin, but all of that was destroyed when he commanded "Hurt them." Not "Kill them" not "Execute them" not "Torture them," but that non-threatening line completely destroyed Geiseric's limited chance to bring life to a series as vine-consumed and ruinous as the Western Roman Empire itself.

Quite honestly, I preferred the History Channel programs from the Aughts, where there were dramatizations of what may have happened at the discussed time periods, but there was no need to put in storylines since the scholars' commentaries and the narration became storylines in themselves. It would be one thing if inaccuracies and clichés co-existed in a historical FICTION television series, but this is a series that claimed to be accurate as a docudrama.

If this was broadcasted from the History Channel, then the producers of this show should have had creative consultants come from scholarly backgrounds of Latin language and Ancient Germanic languages. Yes, it may have taken a lot more time for the actors to recite their lines in the reconstructed languages of the Visigoths, Vandals, and Romans, but that time would've been worth it.

I highly doubt that Modern British English posh with some Ancient Roman stentorian arrogance would have been spoken by the Barbarian tribes and the Romans in this time (just saying). But a cringing moment for me when the focus comes to language comes from Boudicca's storyline when she is told "Mercy is for fools" by the Roman general who scourged her back, and before she burns a Roman settlement, she repeats those words in her exotically menacing tone "Meh-see is fuh fools." Of course, Boudicca's language that may have been spoken was not documented, but it has been verified that her tribe spoke a language related to Welsh and Breton, which are also of the indigenous Brittonic Celtic family. It would have been one thing if that phrase was translated into Latin and Brittonic Celtic.

I know that it was released two years earlier from the time this article was written, but when the mini-series is continuing to be reproduced (for payment), then it deserves to be critiqued in its harshest fact-checking. As a reference to the title, I will say that this mini-series had Icarus-levels of ambition that ultimately turned a potential for an examination of the cyclical nature of oppression into yet another action-packed, ancient world flick.

From Your Site Articles
Related Articles Around the Web
history
Report this Content
This article has not been reviewed by Odyssey HQ and solely reflects the ideas and opinions of the creator.