And the ballroom dance competition is still weeks away. 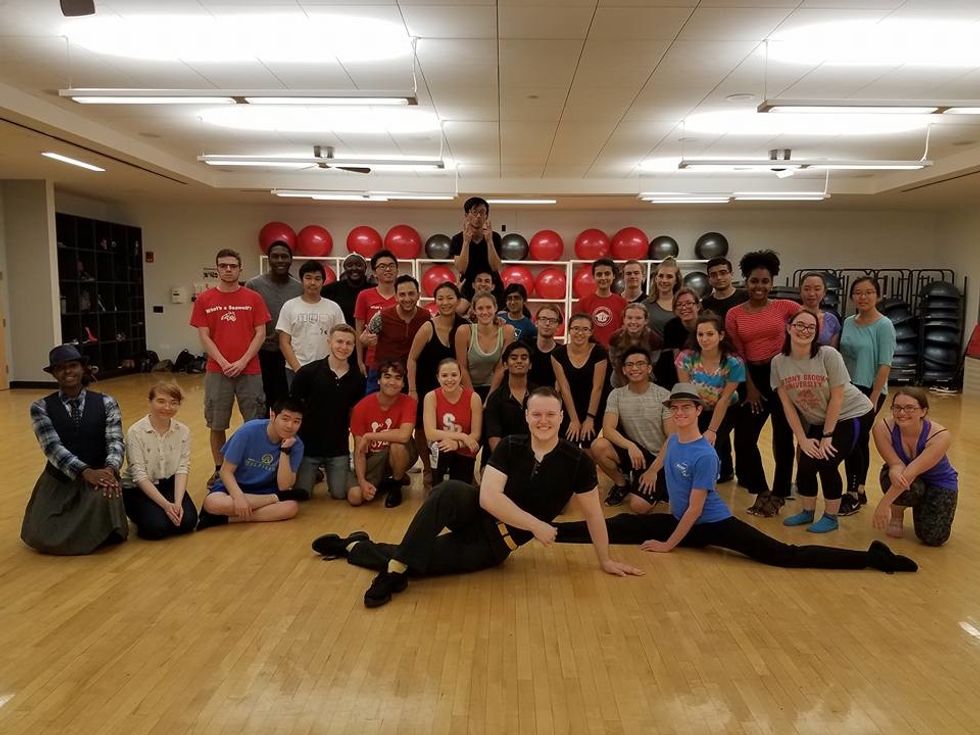 I am a member of my university's ballroom dance team. I had first tried to join the team my first semester, but I only showed up for one or two classes before ditching for a year. I was not yet comfortable with the idea of being in close proximity to strangers (especially boys) which many ballroom dances required. I found the leads too forceful, the room too hot, and the activity too intimate and uncomfortable to continue with it. I decided to just stick with solo dancing.

I did not return and start regularly showing up to practice until my second year. I cannot say I was too comfortable at that point either, but I was stubborn and stuck it through. It was when a friend who was also on the team asked if I knew bachata. He said he would show me when I admitted to not knowing the dance style then proceeded to draw me into the most intimate feeling (and thus off-putting) dance of my life up until that moment with little warning and no expectation. I learned to adapt quickly after that. Now I most often find myself plastered to my partners and trying to draw myself even closer because it makes the dancing easier.

In the year and a half that I have been ballroom dancing, I had never done much to expand upon what I learned for maybe two to four hours a week, and I balked at the idea of competing. What I loved about the ballroom dance team is that they provide a rather low pressure environment where one can learn and grow without needing to perfect the craft. They do push you to improve but do not disparage your lack of immediate progress. I will say though that if you have been there as long as I have without competing, they do start dropping the oft dreaded question:

"Are you going to comp?"

No. That was my answer every time I was asked. As a perfectionist on the wayside of maladaptive, not being essentially "perfect" or, at least, well advanced at something is discouraging, anxiety-inducing, and sometimes debilitating. I do recall having mild episodes or anxiety attacks at practice, or I would find myself emotionally drained and shut down at the end of the night because I just could not deal with messing up so much in such a short span of time.

At times, it took serious effort for me to even make it to practice when I felt I was not doing well at all or I would end up falling back into avoidance behavior that led me to hiding or sitting it out while making humorous self-deprecating remarks to cover up my genuine internal self-reproaching. The only reason I did not quit was because my want to learn outweighed my fear of making mistakes. Asking me to compete though at something I did not believe myself to have a good grasp on was even worse because that would open myself up to even harsher self-criticism at every little perceived mistake.

However, even I can be worn down by "subtle" persistence, and I could not quite talk myself out of signing up for the nearest competition. I will admit that I still cannot shake the faint dread at the thought of competing, but I have not immediately withdrawn my name. I have my self-pride (and money) on the line.

Comp is less than a month away and I have been learning and rehearsing routines with my lead almost every day of the week. I had never realized how much I have been stagnating my own progress until I began practicing outside of class.

Each day of extra practice has revealed something to me: maybe I could do this. I am actually remembering routines (though I still make mistakes if a few days go by without practicing a particular one or when I am without a lead). I am starting to remember (and pull off) the names and figures of different dance styles and beginning to identify music that corresponds with each. I even find myself dancing rumba when I am distracted. I have improved more in the past two or three weeks of increased practice than I had over my entire ballroom dancing experience.

Of course, that does not come without a few new problems. I have always had stiff hips, so the flexibility that is required for some of the dances has put a strain on them. Sometimes, they will flare up or suddenly feel like they are about to give out on me even when I am not dancing. That is pushing me to stretch more. I have been more acutely aware of my worsening posture because bad posture while dancing causes back pain, so I have been correcting that too. The only inexplicable and currently unaddressable thing is my increased propensity to cramping behind the knee. That takes me down randomly. So if you see me collapse suddenly, you know why. I am fine. It passes in seconds.

Despite these complications, there are many benefits as well. Holding up my frame has slowly been increasing the strength of my shoulders and arms. My legs are getting more toned from quick and demanding figures and constant movement. My reflexes are getting better from having to adapt to my lead's cues and changes in the routine. My stamina is increasing from dances like jive, quickstep, and samba, and as mentioned before, my confidence has increased enough to allow me to be comfortable dancing close to others and, hopefully, performing before those outside of the team.

I am certain that comp day will not be my best day, but I am starting to believe it will not be as bad as I have been fearing. I do not doubt that I will have a few things to nitpick and beat myself up over, but I also feel kind of competent now, like I actually know what I am doing. What's more is I have time to keep improving.

It has been a worthwhile experience and I will stick it through, even if my hips hate me a little.

dance
Report this Content
This article has not been reviewed by Odyssey HQ and solely reflects the ideas and opinions of the creator.