Check out some of the technology that might push you out of the workforce! 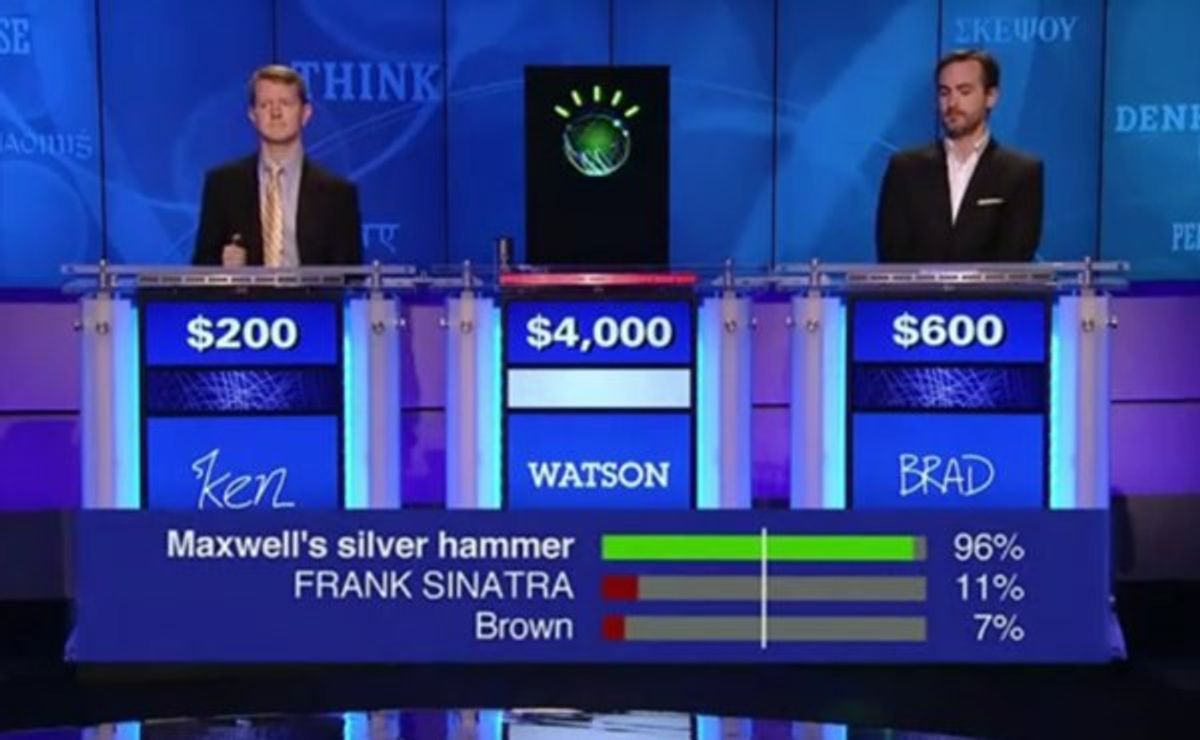 “Most of those who actually work in computing think the IT revolution has barely begun. The potential productivity gains from smart machines driven by artificial intelligence – or to use the more emotive term, robots – are at least as great as any of the other revolutions...it is probably a mistake to think of these transformational technologies as separate events. A better way to view the march of technology is as a seamless progression of mechanical developments."

- Jeremy Warner, “Our robotic revolution is only just beginning to gather steam”

Pictured above is an IBM supercomputer named Watson. It won a game of Jeopardy! against two world champions in 2011, receiving a prize of $1 million (all of which was donated to charity). Despite that it has not appeared on "Jeopardy!" since 2011, Watson has been staying very busy. It reads all of the world's published medical literature at a rate of 60 million pages per second and uses that knowledge to diagnose patients and suggest treatment options. It is already better at diagnosing cancer than human doctors.

Since approximately 12 million people are misdiagnosed every year in the United States, significantly harming 6 million of them, Watson is in a good position to start saving lives by pushing people out of their jobs. It is partially because of supercomputers like Watson that technology will replace 80 percent of what doctors do.

Watson is only one example of the applications of modern technology and how it can improve human lives by replacing human workers. As I described in part one of this article series, automation will remove jobs from the workforce at an increasing rate over the next few decades. While this will eventually spread into most areas of the economy, it can be easily seen right now in several specific areas such as manufacturing, transportation, medicine, law and writing.

Automation of the manufacturing industry is unlikely to come as a surprise to many people. After all, machines have been replacing factory workers since the Industrial Revolution. But the automation of factory work and subsequent displacement of jobs will speed up over the next decade. According to the Boston Consulting Group, only 10 percent of jobs that can be automated have already been automated, and that number will rise to 23 percent by 2025. This effect is largely due to cheaper and more efficient robots, such as Baxter from Rethink Robotics (pictured below).

Up until this point, most robotic machines used in factories have been very expensive and highly specialized. Just like the first computers, those machines were massive and could only be used for a very specific job by trained experts. However, Baxter is one of the first general-purpose robots. It can be trained to perform a variety of simple tasks, just as the first personal computers could run simple programs that allowed for mathematical calculations and word processing. And, over time, the computers became less expensive and more powerful until any personal computer could perform countless tasks on its own. In the same way, it is likely that general purpose robots will be able to take over the overwhelming majority of factory and manufacturing jobs.

While many people would easily accept that jobs in the manufacturing industry are likely to be automated, they might be more skeptical about the same effect happening in the transportation industry. Still, as human drivers become more expensive over time due to the increasing minimum wage, self-driving cars will become cheaper since technology decreases in price as it is mass-produced. Self-driving cars also become safer over time as their technology advances, unlike human drivers. For example, Google’s self-driving cars are already safer than most human drivers are. They brake and accelerate more smoothly, and they maintain a safer distance from vehicles ahead of them. In the 1.7 million miles that they already traveled, 11 accidents occurred -- none of which was caused by the self-driving car. By comparison, human drivers in the U.S. cause about 111 deaths per 1 million miles traveled, which adds up to over 32,000 deaths per year.

Our human drivers not only cost tens of thousands of lives per year but also a huge amount of money. Traffic accidents cost the U.S. $242 billion in 2010, equal to $784 per person and 1.6 percent of our GDP. That places huge economic incentives on any hiring manager of the near future to invest in self-driving cars instead of human drivers, especially since 94 percent of car crashes are caused by human error and self-driving cars are never distracted by anything.

While the driverless trucks that could put the 3 million U.S. bus and truck drivers out of a job have yet to become popular, they do already exist. The Mercedes-Benz Daimler, for example, has driven on German highways since 2014 and is projected to become publicly available around 2025. Driverless trucks are already being used in Florida construction zones. Rio Tinto, a British-Australian mining company, has been using 150 driverless trucks since 2011 when it bought them due to worker shortages.

In some ways, the automation of jobs in the medical industry is more visible than that of the transportation industry -- and not just because of Watson. For example, the FDA approved the use of a robot called the RP-VITA in 2013. The RP-VITA is the first autonomous robot to be used in hospitals -- doctors can tell the robot where to go and then use its screen for virtual communication with patients. Not all medical automation advancements take place in hospitals, though. In 2012, Remedi SeniorCare opened a fully automated pharmacy to distribute medication for the residents of almost 120 long-term care facilities. A similar system is available right now from RxMedic, and it can automate the sale of up to 256 of the most commonly purchased medications.

Another type of white-collar job that could be surprisingly vulnerable to automation is legal work. Despite how lawyers are portrayed by the media, the vast majority of a lawyer's job does not involve speaking in a courtroom. Most of it is spent either predicting the likelihood of certain cases going to court, advising companies and organizations in legal matters or doing discovery. Discovery is the process of sorting through large amounts of data to find irregularities -- and "e-discovery" software easily outstrips human lawyers in price and speed. Likewise, online legal services can provide advice and consulting for a small and decreasing amount of money compared to its human counterparts.

Finally, one of the areas that is sometimes considered to be "too creative" to be automated is writing. However, algorithms have already written articles in Forbes magazine. Narrative Science uses its natural language generation (NLG) program called "Quill" to write a news story every 30 seconds about all kinds of subjects. Quill has written over 400,000 news stories about Little League games, and here is a list of Forbes articles written by Quill. While the algorithms used by Narrative Science may not be able to write emotionally moving prose -- yet -- they are already able to write at the level required by most jobs in journalism for a lower price.

These were only a few examples of technologies that exist right now that have the potential to replace large segments of the American workforce. But when they do, if we prepare appropriately, we could arrive at a post-scarcity economy, where we can reasonably assume that resources are abundant rather than scarce. I will expand on this idea and how it could come about next week in my concluding article in this series: "The Future Of Humanity."

For more examples of automation in unexpected areas, check out some of the following resources:

Music: The New York Post, "One of the world's biggest pop stars is a Japanese hologram," Experiments in Musical Intelligence

Visual Art: The New York Times, "The Artist's Angst Is All in Your Head"

Education: CGP Grey, "Digital Aristotle: Thoughts On The Future of Education," and Inside Higher Ed, "Score One for the Robo-Tutors"

Emotional Communication: CNN, "Meet Pepper, the emotional robot" and "'Emotional' robot sells out in a minute"