A Day with Officer Tommy Norman 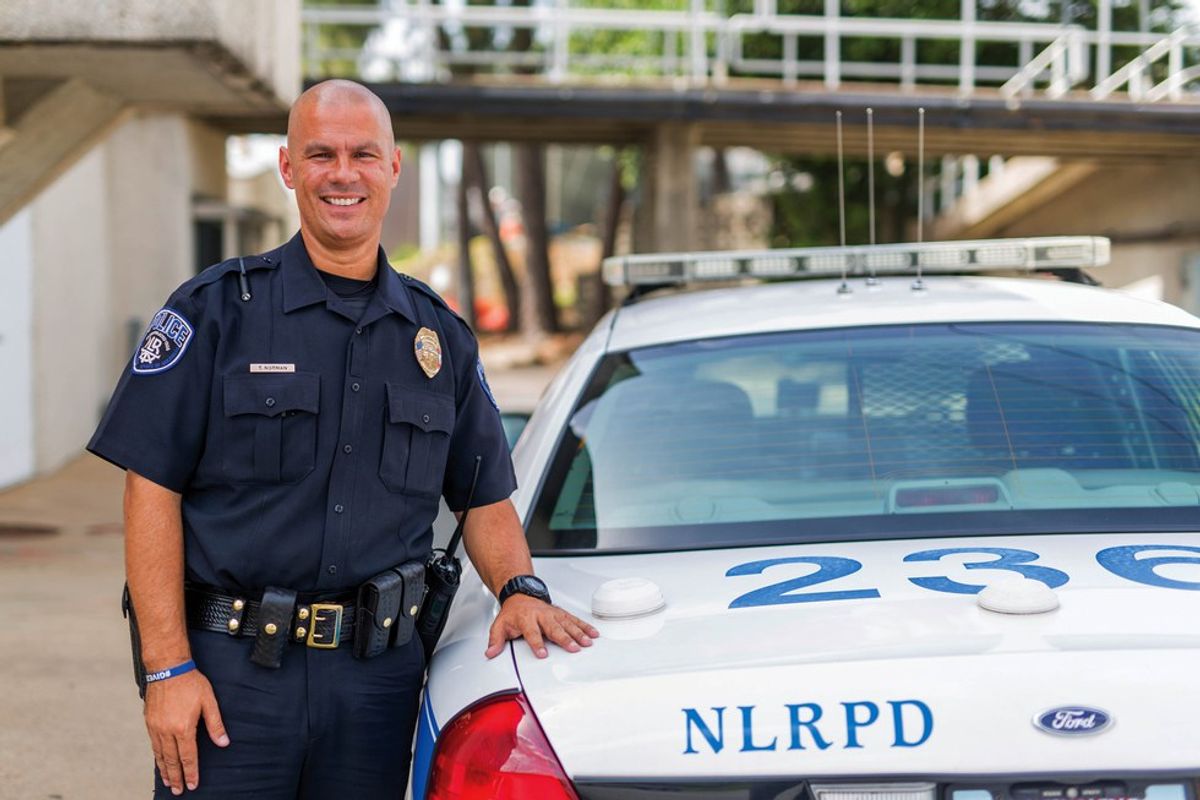 Long before he was thrust into a national spotlight for “positive policing”, Officer Tommy Norman was a beloved officer patrolling the streets of North Little Rock, Arkansas.

He joined the force as a patrolman of the North Little Rock Police Department in 1998 and has not left the streets of N.L.R since that time. Norman says that becoming an officer was more than a dream job for him, it was a calling. And his passion for helping people began as early as age 13.

“As a teenager, anytime I would see a police car or an officer riding his bicycle, I always watched them as far as my eye could see them because to me, they were superheroes that just happened to be in my neighborhood.”

Norman also notes that he is reminded of the oath he took 18 years ago: to protect and serve. He explains that most people understand the aspect of protection. “First and foremost, we’re going to protect you. We’re going to protect your community, the neighborhood that we’re assigned. When you’re sleeping at night, we’re going to watch over your house. When you go to work during the day, we’re going to watch over your home.” He continued, “But the serving part, to me is the most powerful part of being a police officer.” As chronicled on his Instagram page, he offers a glimpse into the lives of those in the community that he serves on a daily basis, with a viewing audience of over 1.2 million followers.

“I knew the opportunity, once I became a police officer, to have a big impact like those officers had on me.” – Officer Tommy Norman

And while Officer Norman has made a tremendous impact on the people of Arkansas, he does not stand alone. There are many men and women in the Little Rock/ North Little Rock area who are also making great strides. Officers such as Captain Carl Minden, Paris Simmons, Officer Angel and Kasey Knight of the N.L.R.P.D and the Pulaski County Sheriff’s office, along with a host of others. Not only are these officers making significant differences in the community, but the city is also partnering with organizations to implement programs such as Romine Rookies, Kids and Cops and the Little Rock O.K. Program. These programs serve as mentoring opportunities to help foster relationships between youth and members of the L.R.P.D. Local schools like Terry Elementary have also embraced programs such as “Adopt a Cop” which reinforces positive interactions. Each kindergarten class is assigned an officer who periodically spends time with students during class, lunch and field trips.

With the string of unfortunate events that have occurred involving tensions between law enforcement and the African-American community, I wanted to know from the esteemed officer what more could aid in bridging the gap. He revealed that a number of things could be done, including more training in cultural diversity and interpersonal relations. But the main component, Norman says, is forging relationships.

“If I’m called to a house where someone is crawling through a window, I’m like, ‘Okay, that’s John.’ He lives there, he locked himself out. How do I know that was John? Because I’ve developed a relationship with John. I know him. I know his family. I know what cars should be parked at his house. I know when he works. Not only do you want to develop a relationship, but you want to know the people behind the stories.”

It's been nearly 20 years since Officer Norman has been on patrol and in that time, not a lot has changed. Aside from his platform having soared from 177,000 to now over 1.2 million followers on social media, Officer Norman is still serving the residents of the North Little Rock area as he always has. Only now, he has sparked the generosity of countless individuals across the country and beyond. His foundation, Mission Give, receives numerous packages on a daily basis for the people in the community. Anything from clothing, school supplies and gift cards to help those who are less fortunate. Norman states that he is humbled by the support and feels an even greater responsibility to continue as a role model to others.

"I've had the same drive and the same mission for almost 2 decades." -Officer Tommy Norman, N.L.R.P.D

To this day, you can find him patrolling the neighborhood, along Vine Street or Shorter Garden apartments. Or sitting on the front porch with Ms. Tina or Mr. George. Or at the bus stop before the kids make their way to school. Or meeting people in the football stands on a Friday night at North Little Rock High School. While the rest of the world may just be getting to know Officer Norman, he's been our beloved officer long before there was even a platform to share him on. And though the residents of Arkansas are proud that he has been dubbed as “America’s Officer”, we're even more honored to call him, our very own.