Jaguars owner Tony Khan, along with several wrestling stars, founded a new wrestling promotion that will be a thorn in the side of WWE when it comes to booking, drawing power, and overall, competition in North America again.

For months, wrestling fans speculated that The Young Bucks and Cody Rhodes were starting their own promotion in 2019. Rumor mills stirred that they had signed with WWE, while others believed their 'timers' on their phones (via their Youtube series "Being The Elite") were to announce their second independent pay-per-view after the successful 'ALL IN' event. When New Years came around, fans exploded on social media when Cody and the Young Bucks announced their new promotion:

Their first event will be "Double or Nothing" with a date set for sometime in 2019. Initial founders Cody, Young Bucks, Hangman Adam Page, and Cody's wife Brandi pleasantly showed off their contracts and announced their positions behind the scenes. Jacksonville Jaguars owner Tony Khan, who is worth more than WWE forefather Vince McMahon, was announced as their president and is quite possibly holding the biggest pursestring for the promotion. It was a shock to some who believed WWE managed to convince these red-hot wrestlers to sign with them, while others think that this is a sign that WWE will be #2 in the near future.

However, this is a sign that North America's pro wrestling scene will have two major companies instead of WWE.

Picture this: Monday Night Raw going head-to-head with AEW Monday Night Superkick (something catchy, I don't know) and it supercedes what was accomplished during the 1995-2001 Monday Night War. All Elite can position wrestlers with great momentum and showcase their skills that aren't a commercial for KFC or Autozone. McMahon would have to dig real deep in order to gain his followers back, especially ones that are slowly following "Being the Elite" and New Japan Pro Wrestling since Bullet Club formed in 2013. All Elite can do something better than what WCW or TNA tried to do: showcase wrestlers for their in-ring and microphone skills as well as offering more than just 'indy darlings' or themselves. AEW can become a true promotion reminiscent of the NWA or even Bischoff-era WCW where competition meant more than remaining stagnant.

After all, Cody Rhodes is from a family of promotional-drifting wrestlers that also had a hand in creative teams. His father, the late "American Dream" Dusty Rhodes, helped book much of Jim Crockett Promotions from 1983-1988 and 1991-2001. Cody's experience with booking, most notably ALL IN, will help him in the long run since the event sold out in minutes and the wrestlers themselves have a massive amount of fans.

An interesting thing to consider is how AEW has a deep pocket of funds with Khan as one of the figureheads.

Back in December, Cody and Brandi Rhodes were spotted at TIAA Bank Field in Jacksonville in one of the boxes usually occupied by Khan. More speculation was then added to the rumor mills that TIAA would be the site of "Double or Nothing" (which had a rally at TIAA on January 8th). However, with Khan being announced as the President, it just shows that Khan's pocketbook will be attached to AEW's account when it comes to paying talent, booking arenas, promoting shows, etc. Additionally, with the success of AEW's two pieces of merchandise on Pro Wrestling Tees, there is a large percentage of money already being made without any shows yet.

Money is a big factor for any wrestling promotion, and there's no sign of AEW rummaging through alleys for scraps right now.

I'm looking forward to what All Elite Wrestling will produce in their first few months of operation. "Double or Nothing" should be an even bigger event than the unforgettable "ALL IN" a few months ago. Cody's chops as a promoter will be tested, but there's much faith in this new promotion that will be in heavy competition with WWE since fans are already exploding with excitement over All Elite Wrestling. 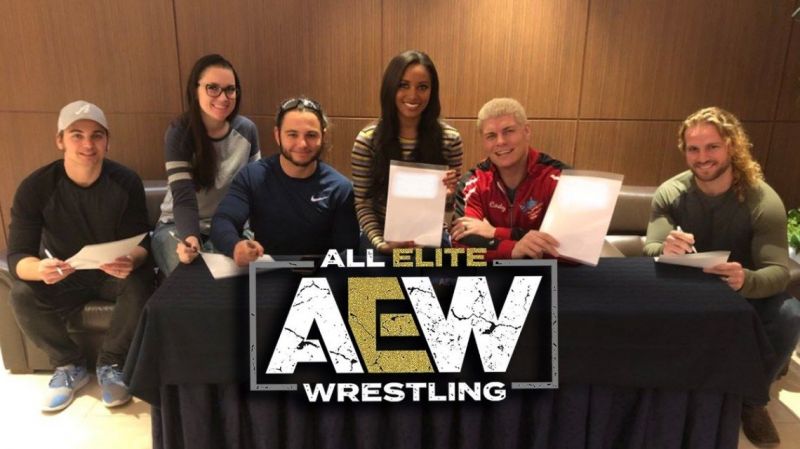 'Straight Passing' Is Not A Privilege For LGBTQ People, It's Just Another Bullshit Stereotype

Meet My Dog: Maddox, A Dachshund-Cocker Spaniel Mix Who Lives In Texas

I’m An OU Student And We Don’t Hate Kaitlin Bennett's Guns, We Hate Her Bigotry