Big Corporations Are Killing The Planet, Not Your Drinking Straws

Big Corporations Are Killing The Planet, Not Your Drinking Straws

Please recycle, but don't think that you are going to single-handedly save the world. 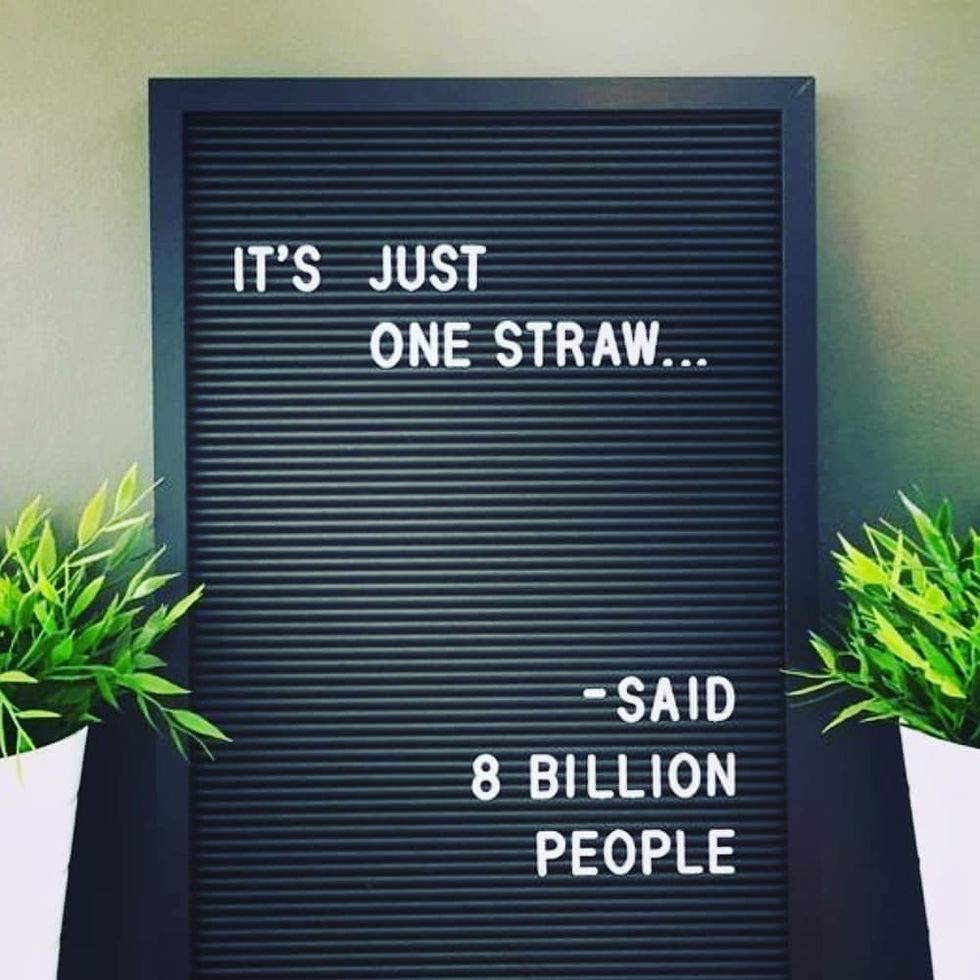 We've been hearing that straws are killing the environment on every form of media for almost a year now. Some of us have given up straws as if our lives depended on it. Others, like myself, have gotten cynical and wondered why our straws winding up in the ocean is our fault. Let's be honest, neither outlook is entirely wrong, and most people fall somewhere between the two perspectives.

The reality is, one person cannot make up for a world of pollution. People are calling wins when companies decide to ban drinking straws, but what does that really mean? Yes, Starbucks did say they would be completely switched over from straws to sipping lids by 2020, but doesn't that mean that much more plastic?

To be fair, the reason Starbucks' switch to lids over straws is a win for the environment is that the plastic used to make those lids is recyclable, while the plastic used in drinking straws is not. I get that. However, if everyone in the world recycled every cup from Starbucks and other businesses following suit, we would still live in a very polluted world. In fact, pollution may very well still rise!

At this point in the conversation, it is easy to get cynical. "If my recycling won't do enough good to be noticeable, why should I bother?" is the attitude that comes to mind. Or we find ourselves with my original and even more cynical attitude, "I am not responsible for the fact that the straw is not able to be recycled or that our trash is being thrown into the ocean, so why are you making me feel bad for using straws?"

The answer to that last question is simple. It is called the individualization of responsibility. Most of our pollution comes from corporations, most of whom spend more time, money, and energy greenwashing than actually correcting the behaviors that are destroying our planet. We, as a society, do not help matters because we let capitalism come before mindful consumerism.

We carry around cellphones, which are basically designed to be toxic bricks within a few years, and we get new ones every couple of years. Yet no one pushes those corporations, like Apple, Google, and Samsung, to make them so that they won't pollute the environment- or to have more efficient ways to collect and reuse these devices.

Gas companies actively lobby against and try to stop pushes for green energy, while providing us fossil fuels to burn, which does not help our environment. They promote fracking, which has been proven to pollute groundwater and cause more earth tremors in the areas they do this in. Also, oil spills are a huge issue, and for some reason, they keep happening because it is cheaper to pay for cleanup and fines and crisis management resources than to look into safer ways to transport oil or to invest in greener energy sources.

Many large companies that use factories dump their waste, which is often toxic, into the environment where it harms plants and animals alike, let alone what it can do to the water.

Some of these companies find it cheaper to pay fines for not regulating what comes out of their smokestacks with the hydro-carbon based smoke instead of investing to find more efficient ways to filter this, so extra chemicals enter the atmosphere along with the extra carbon that is already leading to more global warming.

The U.S. government, for its part, leaves its involvement up to its legislature. Did I mention all of these companies pay for these people's campaigns to stay on the said legislature? Our House of Representative has committees committed to science and the environment both, and yet our government does not recognize global warming. It's no wonder they side with the corporations and decide to try to ban plastic straws instead of getting to the heart of the pollution matter (of which over 71% is caused by corporations).

None of this is the fault of you or me specifically. Your everyday consumer is not directly to blame for the state of our planet. However, our society as a whole values capitalism over mindful consumerism. We choose what is cheap and easily accessible over what is sustainably made. We choose Amazon Prime and its two day delivery over mom and pop shops, craftsman, etc. Mostly though, we are complacent.

I do not mean you are complacent. We all form a very complacent society. We as a whole do not vote on the side of the planet we call home. We do not hold the companies we work for and buy from accountable. A lot of that lack of accountability comes from a lack of know-how and a lack of conversation.

Petitions mean nothing; as my dad says, they aren't worth the paper they're printed on. But our votes matter, if we can make them large scale enough to impact. So we need to start a conversation. Talk about how you want to do your part by recycling what you can and shopping mindfully. Encourage others to do the same. Create a conversation about how we can push for change, and make that conversation large enough that people in power, from mayors to senators, start noticing. And that's when you utilize your vote, and call upon others to do the same.

We are not going to change this in a day. All the straws in the world disappearing wouldn't save all the marine life — there is too much garbage already. But we can push for understanding. We know one individual will not change the world, but when we push society to care and convince large-scale action to be taken, suddenly we've got a fighting chance at saving this place.