Abortion Bans Are Part Of A Larger Republican War On Women...And Freedom Itself

These bans expose the Republican Party for what it truly is. 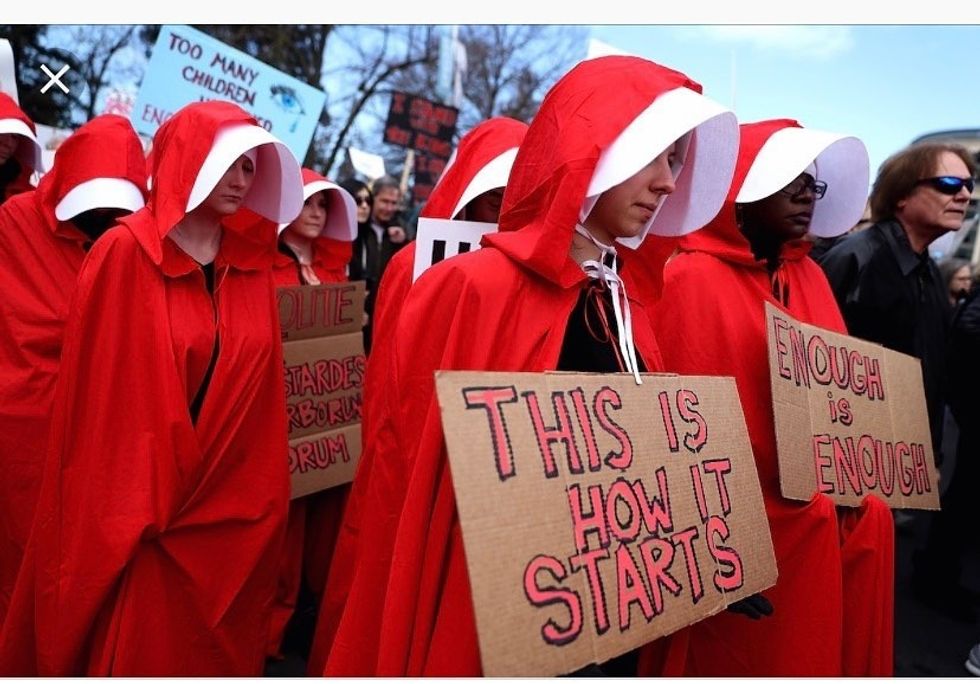 This week, several states passed laws that ban abortion after six to eight weeks of pregnancy, before most women even know that they're pregnant. The most egregious of these is Alabama — the state has banned abortion except for in cases of danger to the mother. Exceptions in the cases of rape and incest were actively voted against by the state legislature. Under the new law, any doctor who is caught giving an abortion would be sentenced to 99 years in prison, and the woman would be charged with murder.

Apart from the fact that this explicitly violates the decision of Roe v. Wade (which is the point), this is only a small part of the slow but steady degradation of women's rights by Republicans in the United States. To anyone who believes that this is simply about people being "pro-life" or "saving the children," then tell them to look at what happens after the fetus is carried to term.

Republicans oppose forcing fathers to be involved in the lives of their children that were forcibly carried to term, desires to cut food stamps and make it more difficult to feed said child, cut funding for affordable housing to make it more difficult for them to find homes, cut spending to public education so these children can't move up the social ladder, and refuse to offer the woman or her child health insurance to keep them both healthy. What about efforts to prevent pregnancy? Republicans also oppose funding birth control and contraception, as well as opposing comprehensive sexual education. To them, the only feasible solution is to simply keep your legs shut. They oppose all of these things because it is, in their eyes, a violation of individual rights to force people to do something. The bill also makes women who get abortions felons, and felons can't vote. I'll let you finish putting those two together.

If you view it from this framework, it would seem like Republicans are being extremely hypocritical by violating the personal freedoms of pregnant women, but if you look at it from the view of restricting social mobility for women, then it makes perfect sense. The Republican dogma of "individual rights" and "personal responsibility" is a socially acceptable facade that they use to cover up their true intentions of protecting the status quo and protect those in power. About any Republican policy, ask yourself: does this disperse power or consolidate it? Whether it be education, healthcare, the environment, or the economy, Republicans love to keep power away from the average citizen and give it to the small number of people that they deem "deserving" of it because of their race, gender, wealth, or power. This is the case with abortion as well; Power is being taken from women, and being given back to men in a reversal of the Feminist Movement of the 1970s.

Republicans don't believe in systemic issues. They believe that everyone has the same opportunity to succeed regardless of what point they started. This is why they love capitalism so much. It acts as some sort of great filter in which only those who deserve power can make it to the top. It's also why they hate social policies; they think that helping people who can't help themselves changes the hierarchy in a negative way by giving people who don't "deserve" power, power. Of course, we know that just because you have money and power doesn't mean you earned it fair and square, and even if Republicans believe it, it wouldn't change anything because it wouldn't change how they want to distribute power.

In short, Republican policies, including abortion, leave the average American with less money, less protection, less education, worse health, less opportunity, fewer rights, and less freedom. This is NOT a side effect. This is the point. Regardless of what Republicans will tell you about "inalienable rights" and how everyone is equal, in reality, they believe that some people and groups are more deserving of rights than others, and the group that deserves rights the most are the ones "that will do the best with them." To Republicans, this group consists of the wealthy, the powerful, and the white — the mega-rich, the CEOs of large companies, gun owners and Christians.

So, who do Republicans think deserve power and give it to? People who look and think like them. This, however, begs the question: Who do they want to take it from?