Our first time for the Rider University Courtside Band at the MAAC tournament was absolutely incredible, and here's why. 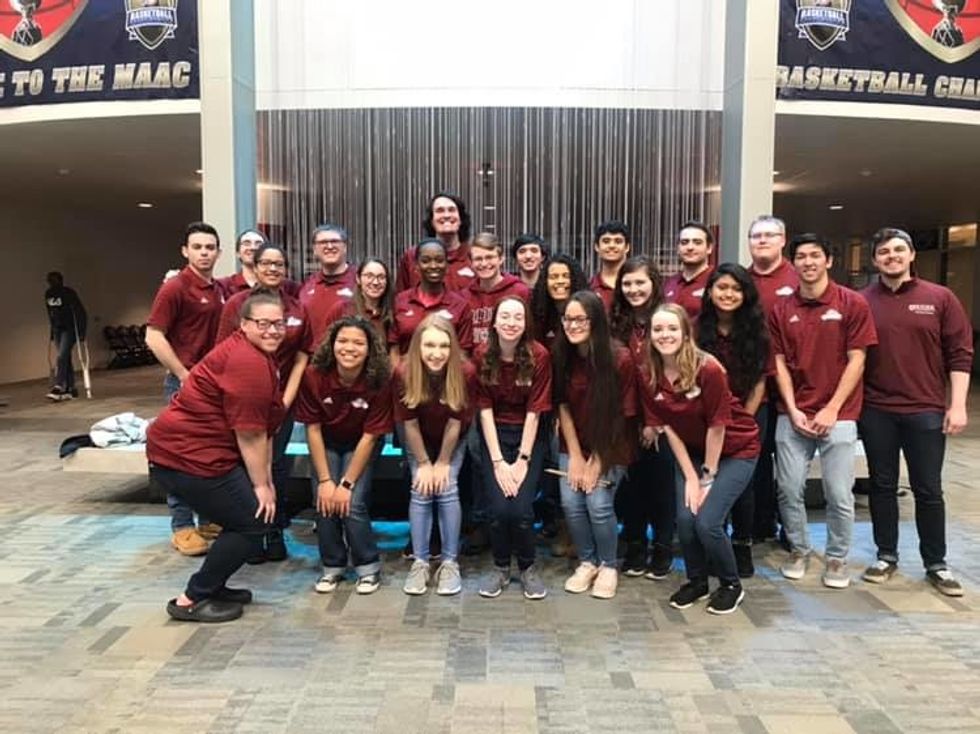 There are firsts for everything, but this experience was probably by far, the best. The MAAC tournament is the Metro Atlantic Athletic Conference where basketball teams compete to win first place. Though our basketball team did not win, the band sure felt like it.

The pep band at Rider University had not gone to the MAAC tournament since 2012. The pep band all but died after that, however, it was finally brought back only two years ago where a select ten people revived it. After that, the Courtside Band was born, and it has been blossoming ever since.

It was only a year after the band was revived that the college asked the band to go to MAAC. Due to the small size that year, the band could not go, but 2019 turned into the year that everyone could go. Thus, it created one of the bands most amazing experiences.

It was absolutely incredible.

The band had the opportunity to perform at a Band Jam. All bands from all the schools that were competing in the tournament played separately and together. Music genres varied and the big bands and the small bands and everyone in the middle all appeared to have a lot of fun. The directors were really getting into the music and band members were starting to really get into it. Band members from all schools were dancing, bobbing their heads, and showing some strong effort in creating their music.

This event brought musical people together, one of the more amazing experiences ever. All the songs that were played, many people recognized, and that no matter what song it was, everyone enjoyed and appreciated it. There was no song that everyone disregarded. (Well, minus the fact one of the schools stole Sweet Caroline from us, but that is irrelevant.)

After that was the women's basketball game, and the band went wild. Since the only people who were able to attend this game were the athletics department and the band, we really wanted the women to have the schools supports. Chants and screams allowed the women's team to win. The band had never been more hyped in their life. Not a single person had a frown on their face, and not a single person complained. We were all having fun, and our team was winning. How could it get any better?

It did, of course.

The band received a lot of acknowledgment after that first game. We had our picture taken, and all the people from Rider University really appreciated how much effort we were putting into our club and the basketball team in front of us. Two years of hard work had slowly started to pay off.

The next day came around and we realized days before that the men's basketball team would not be playing until 9:30 at night, so the bad decided to have a little fun beforehand. Days prior, the executive board of the band created an itinerary, planning out the day as best as possible for the maximum amount of days we would be at the tournament. For this particular day, the band had decided to go to the New York State Museum. Not everyone seemed super excited about going to a museum, but the majority were excited.

The executive board really tried to explain why going to this museum was a privilege. The cheerleaders and the dance team that was joining us didn't have this opportunity. They did not plan out their day in a way that would allow them to experience all that Albany, New York had to offer. And so, the band went to the museum for a few hours before heading back to the hotel to relax. Then the band went to the mall and were able to go to the men's basketball game.

Although we lost the game and got back to the hotel extremely late, the band truly had an amazing time. The opposing team's fans may not have been the nicest to use we left (chants of Chick-fil-A, political references, and trying to get physical with us) we did not let their rude actions impact us. We kept our heads held high because not only was the game extremely close, but we were proud of our team no matter what.

The next day was hectic because the women's game was extremely intense. Our basketball team was really trying their hardest to win, but unfortunately, it was not meant to be. After the game, the band made the decision to wait for the crowd to clear out and avoid any possible confrontations like their previous night. This allowed us to receive the compliments we are extremely proud of and will continuously talk about.

Out Athletics department President had really given us some kind words about our performance and support of the team. This being our first MAAC tournament in years, he was extremely impressed with us. We couldn't have been happier. All the effort we had been putting in for two years had finally been paid off. We were getting the attention and appreciation we really felt we deserved.

In the end, it was all about the band is a family. This trip really allowed members to get to know one another better, and understand the true meaning of the band. Family. Each member supports the other with 110% percent effort. Everyone, no matter the age looks out for the other. With all the craziness and fun that was MAAC, it brought out the best in everyone.

We are a team, and although we may not be a sport, we work together to help the one we are rooting for.