7 Albums To Inspire Your Next Piece
Odyssey

7 Albums To Inspire Your Next Piece

If you're looking for creative inspiration, these seven albums are your solution. 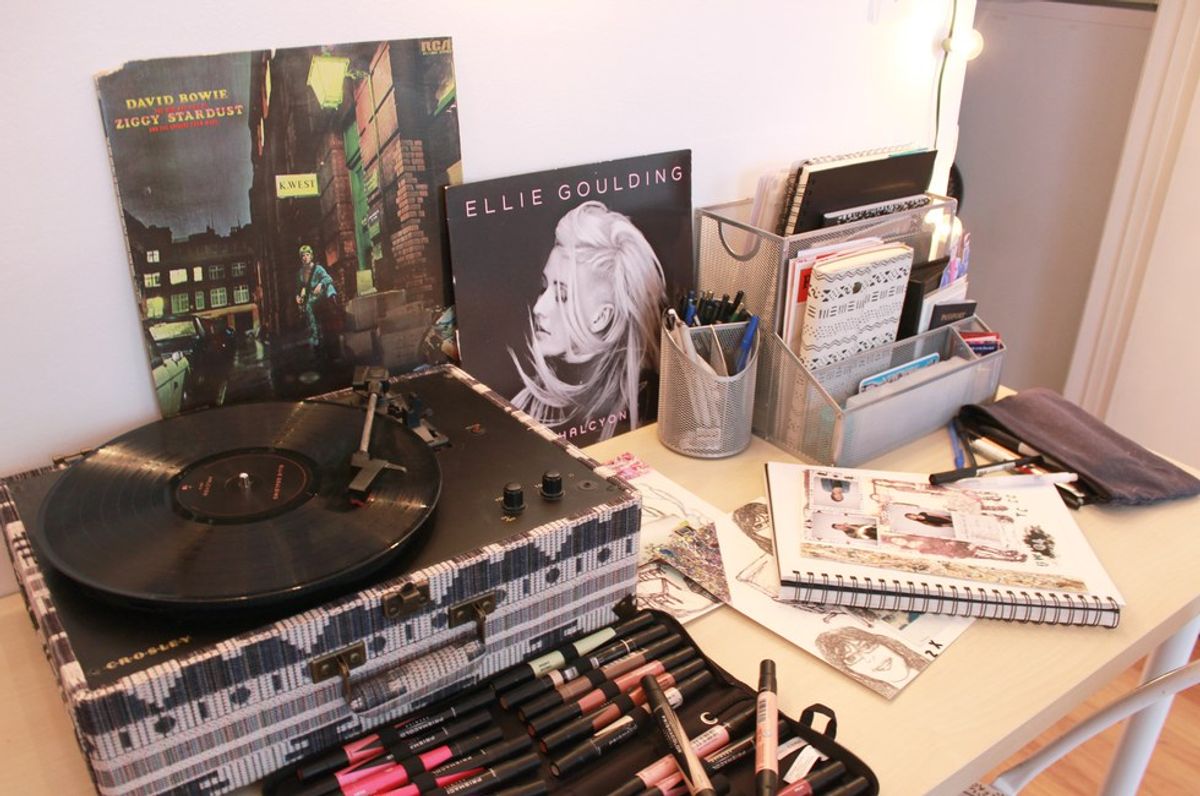 Joseph Castanon
As an artist, I'm constantly looking for new things to inspire my work—and nothing does that better than music. I'm a fan of all kinds of art, from Abstract Expressionism to Renaissance art. Here's a short list of seven of my favorite albums that have provided inspiration for a number of my pieces, in hopes that you can find that missing creativity you are looking for, too:

Do you consider yourself a psychedelic and adventurous artist? Looking to explore a new medium? Alison Wonderland’s "Run" will provide you with all the energy you need to make your newest piece. With elements of dance, trap, and EDM music, this album will take you on a wild ride through a inspiring universe -- quite like "Alice in Wonderland." Although my favorites are "I Want U" and "Games," you’ll literally feel the creative energy growing with every beat drop and song change. Just put it on and let Alison Wonderland’s artistic universe inspire you to explore something new.

2. David Bowie — "The Rise and Fall of Ziggy Stardust"

Creating something conceptual and out of this world? Look no further. With "The Rise and Fall of Ziggy Stardust" debatably being Bowie’s most quintessential album of his career, you’ll find tons of inspiration in all things Bowie. The album is a true concept album—it creates a narrative for Bowie’s alter ego, "Ziggy Stardust," and his many glam-rock adventures. The album was first released in 1972 and is full of Bowie classics like "Starman," "Ziggy Stardust," and "Suffragette City." Bowie has inspired dozens of musicians and artists that came after him, and I’m fairly certain he’s inspired you, whether you know it or not. Sit back, daydream to this album and find your next innovative piece. Glitter and all.

Is your next piece centered around any of the "Wild" adventures of love? Are you feeling like you could be entering your "Blue" period? Then look no further. Troye Sivan’s debut album "Blue Neighbourhood" is not only a triumph for all YouTuber fanatics, but a beacon of inspiration for all emotionally connected artists. With a few upbeat tracks like "For Him" and "Suburbia," the main mood of that album is that of remorse, regret, and impending solitude with tracks like "Fools," "Bite," and "Talk Me Down." So dig out your old photos, grab some paint, and create a meaningful piece about of your past loves.

If you’re looking to create an angsty and deeply conceptual piece, this is the album to listen to. Marilyn Manson, a man shrouded in mystery and controversy, released one of his most iconic works, "Mechanical Animals" back in 1998. The album’s themes range from lack of glamour, to self-reflection, and of course, sadness. The album’s sound has traces of Bowie influence, mixed with hard rock, pop, and even R&B music. Some of my favorites on the album include "Coma White," “Rock Is Dead," “I Don’t Like the Drugs (But the Drugs Like Me)," and "Great Big White World." So pick up that paint brush, pen, fabric, etc., and begin creating your abstract and moody piece. Maybe throw in some fake blood and black paint in true Manson spirit.

Want to do a piece about self-discovery and social activism? Or maybe something artsy and philosophical? This album has everything you need. With Mother Monster being an undeniably creative force in the industry, this album houses many messages such as equality, feminism, and self-acceptance. With the classic Gaga tracks like “Born This Way,” “The Edge of Glory,” and “Yoü and I" being almost impossible not to get hung up on, you might find further inspiration in songs like “Scheiße” and “Bloody Mary,” which have deep social meanings and might just lead you to your next performance art masterpiece.

Would you consider yourself an abstract and unconventional artist? Creating something innovative and never seen before? Then "LP1" is exactly what you need right now. FKA Twigs is an enigma herself and that mysterious, inventive personality beams through this album. With haunting and fascinating songs like "Pendulum" and "Closer," the spirit and vibe of the album screams creative genius. So get out of the house and find some new materials from your local junkyard and create something completely new. Be inventive and let FKA Twigs guide you on a compelling journey.

Are you stuck in an artist’s block? Do you seem to not have any idea what direction you want to take? Then stop reading this article and put this album on immediately. While Ellie Goulding is known for her hits like "On My Mind" and "Love Me Like You Do," "Halcyon Days" is where you can find Goulding’s best work. The album’s sound ranges from experimental rock-influenced tracks like "Don’t Say a Word" to exciting dance tracks like "Anything Can Happen" and all the way to heart-wrenching ballads like "Explosions" and "Dead in the Water" (seriously, get some tissues). This is the album for the person who is stuck on whether they want to create a bright, fun painting or a mournful work of art. Listen to the album, try not to be blown away by Goulding’s angelic vocals, and discover the piece that’s calling out your name.