Every Harry Potter fan has to at least try this once. 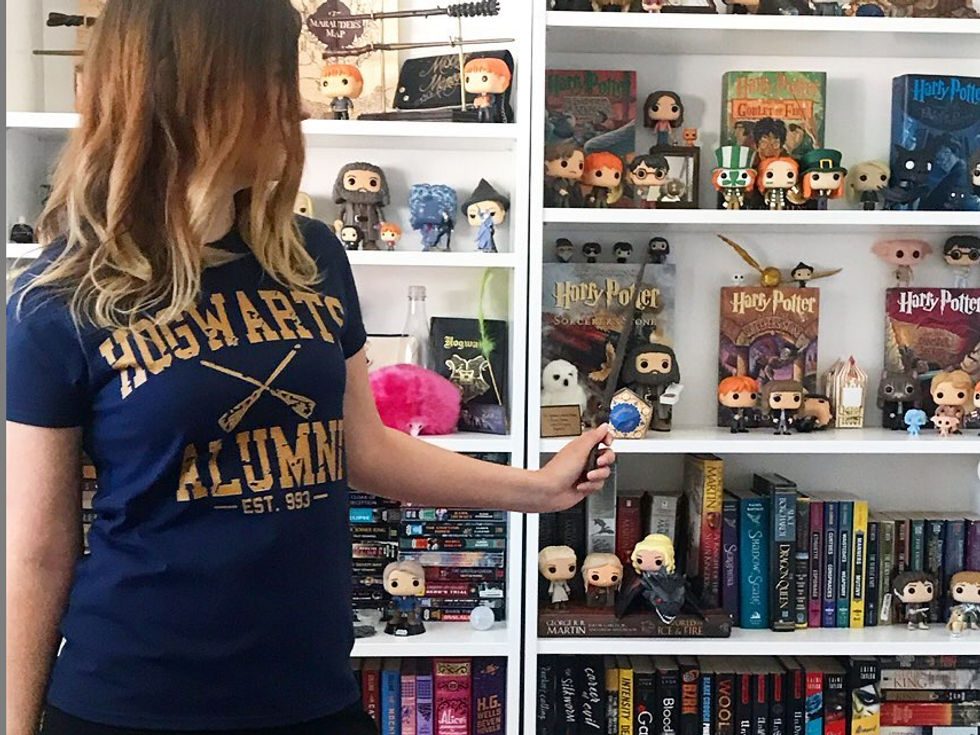 Looking for the perfect list of questions for a Harry Potter trivia night?? Looking to test your own or your friend's knowledge of the books just for fun??? Studying so you can be a whiz at wizard trivia???? Look no further!

Below is a list of questions only someone who has read the books at least twice may know.

These are *Siriusly* hard questions and don't worry there is nothing *Ron* with you if you can't get them all. So why don't we *Slytherin* before you get annoyed with my *magical* puns and references?

1. How old is Nicholas Flamel when he decides to destroy the stone he helped create?

Last part is easy, but the other six...

Answer: Lacewing flies, leeches, powdered Bicorn horn, knotgrass, fluxweed, shredded Boomslang skin, and a bit of the person you want to turn into.

3. How many possible Quidditch fouls are there?

It's a dangerous sport

Think of the signature...

5. Dumbledore has a scar above his left knee that is a perfect map of what?

6. How many staircases does Hogwarts have?

I would not want to get caught on one of them when it moves, I'd already be lost enough most likely.

7. Monkshood and Wolfsbane are the same plant, also known as what?

You must be a Potions Master to know this one

8. What man's statue is next to the special lavatory entrance of the prefect's bathroom?

I'd hate to take a bath with a statue staring at me the whole time...

9. How much does a ticket on the Knight Bus cost if it includes hot chocolate?

For the stranded witch or wizard.

10. Which row in the Hall of Prophecy contains the prophecy about Harry and Voldemort?

Think of the mess if someone were to knock them all down... *Enter Harry*

11. What is the five-digit code you must dial to get in the visitor's entrance at the Ministry of Magic?

Easy way to remember in case this ever comes up, it spells M-A-G-I-C on a phone's keypad.

12. What is the name of the Apparition instructor who comes to Hogwarts in Harry’s sixth year?

If only traveling were this easy.

13. Voldemort stole Helga Hufflepuff's cup from an old woman, what was her name?

She was a rich, avid collector who's prized possessions were Hufflepuff's cup and Salazar Slytherin's locket, both which were stolen by young Tom Riddle after he murdered her to make a Horcrux out of the cup.

Bonus Question: What was the name of her house elf who was blamed for her murder?

14. Mullet, Troy, and Moran were the chasers for Ireland in The Quidditch World Cup, who scored the first goal?

The team was well-renowned for their superb Chasers.

15. What is the name of Ginny Weasley's Pygmy Puff?

16. On the wall across from the Room of Requirement, there is a tapestry showing a wizard trying to teach trolls ballet. What's his name?

Must've been an extremely difficult job...

17. What is the max speed for a Firebolt broomstick?

18. What color did Hermione turn the leaves of the Weasley’s crab-apple tree on Harry's 17th birthday?

19. How many house points did Gryffindor win by in the first book?

20. Which chess piece does Hermione play in the Philosopher's Stone?

The best game of chess in a century!

21. What are the name's of Severus Snape's parent's?

22. In his sixth year, why did Cormac McLaggen miss the Quidditch tryouts?

Answer: He ate a pound of poisonous doxy egg's for a bet, to prove his bravery

23. Beside's peace between Wizard's and Muggles what would Gilderoy Lockhart not mind to have for a birthday present?

And his favorite color is Lilac.

24. What is the password to the prefect's bathroom on the fifth floor?

I'm sure at least one of the soaps will have you smelling...

25. What is Fred Weasley's code name on Potter Watch?

Though previously and briefly "rodent" he chooses a much cooler one

26. What is the first thing Romilda Vane offers Harry that is spiked with love potion?

Love potions should be illegal if you ask me... well ya know.. if they existed.

27. Who teased Moaning Myrtle about her glasses that lead to Myrtle crying in the washroom before getting killed?

Myrtle haunted her for many years after death but was forced to stop after showing up at her wedding.

28. What is the last word Uncle Vernon says to Harry before going with Diggle?

And they weren't meaningful

Answer: "I thought we were on a tight schedule!"

29. What was the night like it when Lily Potter died according to Tom Riddle?

Exactly what you'd expect on such a horrible night

30. What are the names of the three Peverell brothers?

The original owners of the Deathly Hallows

Partly cause the competition kept getting canceled...

Answer: The Prisoner of Azkaban, The Order of the Pheonix, and The Half-Blood Prince

32. Which vault belongs to the Potter family in Gringott's Wizarding Bank?

There are a lot to choose from...

33. When is Hermione's birthday?

Hint: She is a Virgo

34. What is the symbol for the Ravenclaw house?

You'd think, mm I dunno a raven but nope!

35. What is Dumbledore's full name?

And we thought Sir Nick's name was long...

36. Who replaces Cornelius Fudge as Minister for Magic?

Rumored that he is a vampire, but he is not.

37. In Harry Potter and the Prisoner of Azkaban, who orders a cherry syrup and soda with ice and umbrella from the Three Broomsticks?

38. What is the name of the fountain inside the Ministry of Magic?

39. How many times was Nearly Headless Nick hit in the neck with a blunt axe?

40. How much do Fred and George Weasley bet on the Quidditch World Cup?

They bet everything they have and got cheated...

41. What does Voldemort do to Neville when he refuses to join the Death Eaters?

Answer: He makes him wear the Sorting Hat as it is set on fire

42. Who takes offense at the symbol Xenophilius Lovegood wears to Bill and Fleur's wedding?

It's because his grandfather had been murdered by Grindelwald who was associated with the symbol.

43. Who was Dumbledore's immediate predecessor as Headmaster or Headmistress at Hogwarts?

It's not Phineas Nigellus Black...

44. Who is Ginny's first boyfriend?

He's not in the movie much, I don't think their relationship is even mentioned in the movies, but in the books it is....

45. Which Gringotts vault was the Philosopher's Stone kept in?

A possible reasoning behind choosing the number of the vault is when the number is written backwards and with a forward slash you get the date Harry and Hagrid visited the vault to remove the stone.

46. What is the first potion Harry ever made?

One I don't understand the existence of unless you want to annoy someone. Draco Malfoy found it's use amusing in his sixth year, but Slughorn only found it passable.

The moment Harry has to remind her that she's a witch

Answer: "will sulk in the sun"

48. What is Ron's favorite comic book?

It's not Spider-Man I guarantee you that...

Answer: The Adventures of Martin Miggs, the Mad Muggle

49. When is Luna Lovegood's birthday?

Lovely Luna Lovegood was born the day before Valentine's Day, no wonder she's so lovable.

50. What does the spell Evanesco do?

The gif is a hint, but not the SAME spell. If you know Latin this one is easy...

And just like that, the list is over :( I hope this provides you with all the Harry Potter trivia you could ever need! If not, have fun looking for *Gryffin*more!