For anybody who felt a tad inspired by "Don't Cry for Me Venezuela." 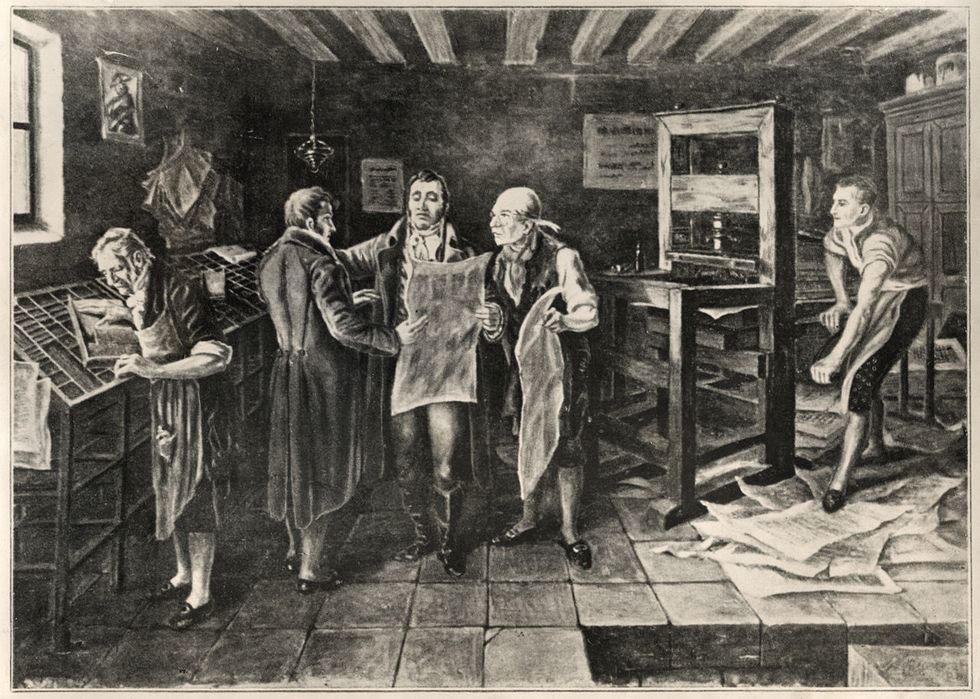 For those of you who enjoyed my viral article a couple years ago called "Don't Cry for Me Venezuela", I'm bringing my time travelling revolutionary series back just in time for Hispanic Heritage Month! I'm not Hispanic but I thought this would be a perfect time to shed light on some of these stories

As a disclaimer- I am not a historian, I'm merely an individual who loves knowledge and good stories. This list is not extensive- and there are probably many more figures who can be added, please let me know their names.

Without further adieu, we shall begin.

Come with me quickly, don't tell anybody where- it has to be under the veil of darkness and you must be sworn to secrecy. Do you swear? Very well my friend, its this way- come into my sanctuary, its wonderful isn't it? Thousands of books on everything from history to religion, sciences to politics and of course my prized collection of foreign languages! Its glorious right?

Now here is why you must swear to keep it secret in 1790s Spanish America- there is no liberty to own these books with dangerous ideas. Regardless of the fact that these philosophers disagreed among themselves and this is solely for the purpose of education. Citizen, please stay away from that desk... that is where the most forbidden thing of all is the Declaration of Rights of Man and Citizen from the French Revolution being translated into Spanish by one Antonio Nariño.

Nariño was a Colombian intellectual who loved books and called his library his "sanctuary" where he had frequent intellectual discussions. He translated the Declaration of Rights of Man and Citizen into Spanish, and was arrested for doing so. After many years in jail he refused to renounce his commitment to human rights. He survived and became Bolivar's Vice President, but his health was terribly damaged from chronic heart disease and tuberculosis he contracted in prison.

*flings on cape and boots* "I swear before the God of my fathers, before you, before my honor and before my country I shall not yield in body or spirit until I smash the chains of Spanish oppression beneath my feet!" these words have run out in a legendary tone throughout world history. The mountains, the jungle it all seems so impossible to liberate but alas- I shall, by the sheer power of will (and of course with the help of all!)

Bolivar's story is one of the most dramatic and exciting in the history of the world. A wealthy criollo who had everything given to him as a kid, but also lost almost everybody he loved due to disease. Read more about him in "Don't Cry for Me Venezuela." Also in Marie Arana's Bolivar: American Liberator. He faced many obstacles and hardships but he never gave up. He was accused (unjustly) of many things, but he never renounced his dream of a liberated and unified America. At times he struggled to understand the various racial groups and classes other than his own, but the more he saw the more he listened and he grew to love America- all of America, the diversity and the challenges included.

My dear reader, come with me on a journey to liberate not only Caracas but also the entire continent and to learn all you can about those who may not think like you. This is the story of Simon Bolivar.

All me to introduce you to one of my favorites of Bolivar's generals. Antonio Jose de Sucre, liberator of Bolivia. He lost most of his family to genocide, and never showed any bitterness against the Spaniards. He had a reputation for being upright and honest and was a dear loyal friend to Simon Bolivar.

I just watched a great series on her! One of the stanchest supporters of independence, and a brave woman who always took a stance for her beliefs. She was part indigenous and look great pride in it. She was a passionate person who always spoke her mind on everything and never backed down when she knew she was right. She helped the revolutionary efforts and served as a spy. Tragically she was captured and executed, but to her last moment she refused to renounce the cause of liberty. She was only 22 years old

Like La Pola, she was involved in a great many things- spy, revolutionary and fervent defender of Bolivar. She was never afraid to speak her mind, and was known for her pranks. (no spoilers)

I could go on with many more- Jose de San Martin of Argentina who liberated the southern cone with Bernardo O'Higgens is also very interesting! There are also many more historical people whose names have slipped from the pages of history books that I would love to learn more about. These five are my favorites, and I truly value their commitment to liberty and independence. Alas my dear reader, I must be off and secretly distribute these translated copies of the Declaration of Rights of Man and Citizen. With the tragedies of inequality, racism, bigotry against those of different faith and human rights violations- we must all be aware of our rights and that we are all created equal. Not only must we speak about these rights today, but pay tribute to those in the past who did as well. My dear reader, continue to learn all you can- until we meet again!