Get out there and live it up. 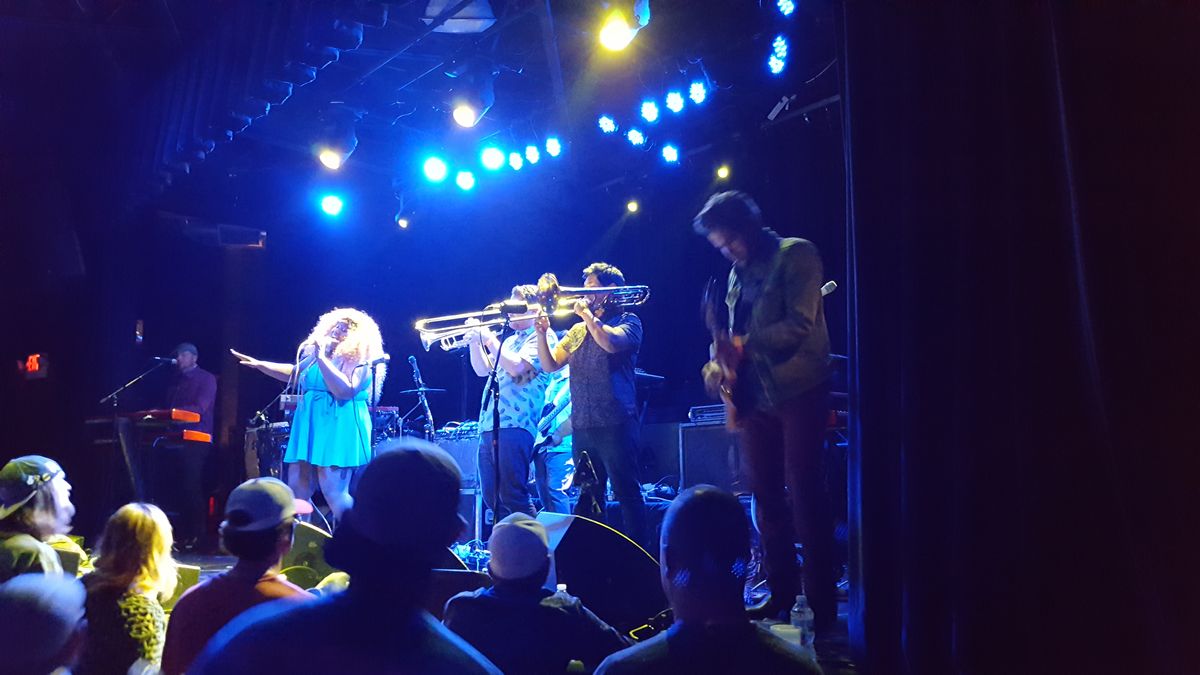 Warning: You may not have an ass after attending one of these shows - I guarantee you will dance it off.

Are you down for the kuaz? You’ll never know unless you go check ‘em out. Over the past three years I’ve probably seen these guys a dozen times, and for good measure. They bring the funk - Every. Single. Time.

They’re a nine-piece, Brooklyn-based band with a horn section, keys, and two groovy back up singers. If that’s not a recipe for bringin’ the funk, I don’t know what is. Synchronized dance moves, color coordinated outfits, and an incredibly tight sound - these guys know how to put on a show.

“It’s called an EWI.” I’ve had BIG Something’s latest release, Tumbleweed, on repeat for weeks now. I saw them at a music festival a few years ago, and again last weekend in Boston. They mix a ton of genres with a modern feel for this electric, almost unexplainable sound. There’s this one instrument, though, that sets them apart from any other band. It’s an EWI - an electric wind instrument. The sound it makes is comparable to an electric rainbow on steroids… whatever that means.

Kung Fu is a super-band formed by members of other popular New England jam bands. The band, described as “lethal funk,” renders the name self-explanatory. Be sure to polish off your boogie shoes before you catch these guys.

Modern electro-funk vibes behind meaningful, powerful rap lyrics. “Freedom’s not a place, it’s a state of mind… Freedom is me, freedom is you.” Sophistafunk will have you bobbing your head all night long.

A fusion of Pink Floyd, Talking Heads, and Phish - the bros in Pink Talking Fish definitely know how to get a party started. We saw them for the first time this past New Year’s Eve in Worcester. They went on around 11:15 PM, and jammed so hard for 45 minutes straight that we didn’t even realize the ball was dropping until we heard “3! 2! 1!” It was an amazing experience, and we’ll be seeing them again, for sure.

Feeling irie? These guys set the stoney mood with some sweet, perfectly executed reggae. Front-man Toft Willingham has pipes for days and the band as a whole is super tight. These guys can rock and get funky, but we love ‘em for the reggae 'mon.

Keller Williams is a one-man band. Literally. He uses looping techniques with various pedals and instruments, including a fretless bass - which I love. That said, it’s pretty amazing to watch one dude manifest an insane jam with numerous different instruments - by himself - live.

Zach Deputy is also a one-man band. His style of music is a little different, but the talent level is there. Zach is well known as a forefront performer for Wormtown. What the hell is Wormtown? It’s a music festival. Actually, it’s two music festivals, but most people just refer to them as "Wormtown."

In May there’s the Annual StrangeCreek Campout, headlined by Max Creek and Strange Folk (two other noteworthy jam bands that aren’t on this list). The Annual Wormtown Music Festival is in September and both festivals have featured every single band on this list (except for maybe The Motet). There may be a "10 Lit Music Festivals" article coming your way soon, so look out for that if you want more info. A simple Google search will suffice as well.

These guys are so good my wife and I picked one of there songs as our wedding song. Like the rest of the bands on this list - if you haven't noticed the recurring theme by now - they bring that funk. Most of the band attended Berklee College of Music in Boston, which comes through in the talent level of the music.

“Funk-flippin’, booty dippin’, dance party delivery squad" - their Facebook bio says it all, and I could not agree more. Currently, they’re on tour with Lettuce (the band just above them in this list) and, that my friends, is just plain insanity in the best possible way. I’ll definitely be attending that show in Massachusetts when they come around. Maybe I’ll see you there.

Most of these guys hail from the New England area, but they tour all over the country. If you desperately need a great night out in your future, I suggest you check one of them out. You’ll thank me later.