How America Can Break Out Of Two-Part Tyranny
Odyssey
CurrentlySwoonLifestyleHealth & WellnessStudent LifeContent InspirationEntertainmentPolitics and ActivismSportsAdulting
About usAdvertiseTermsPrivacyDMCAContact us
® 2023 ODYSSEY
Welcome back
Sign in to comment to your favorite stories, participate in your community and interact with your friends
or
LOG IN WITH FACEBOOK
No account? Create one
Start writing a post
Politics

How America Can Break Out Of Two-Part Tyranny

​Voting for a better future. 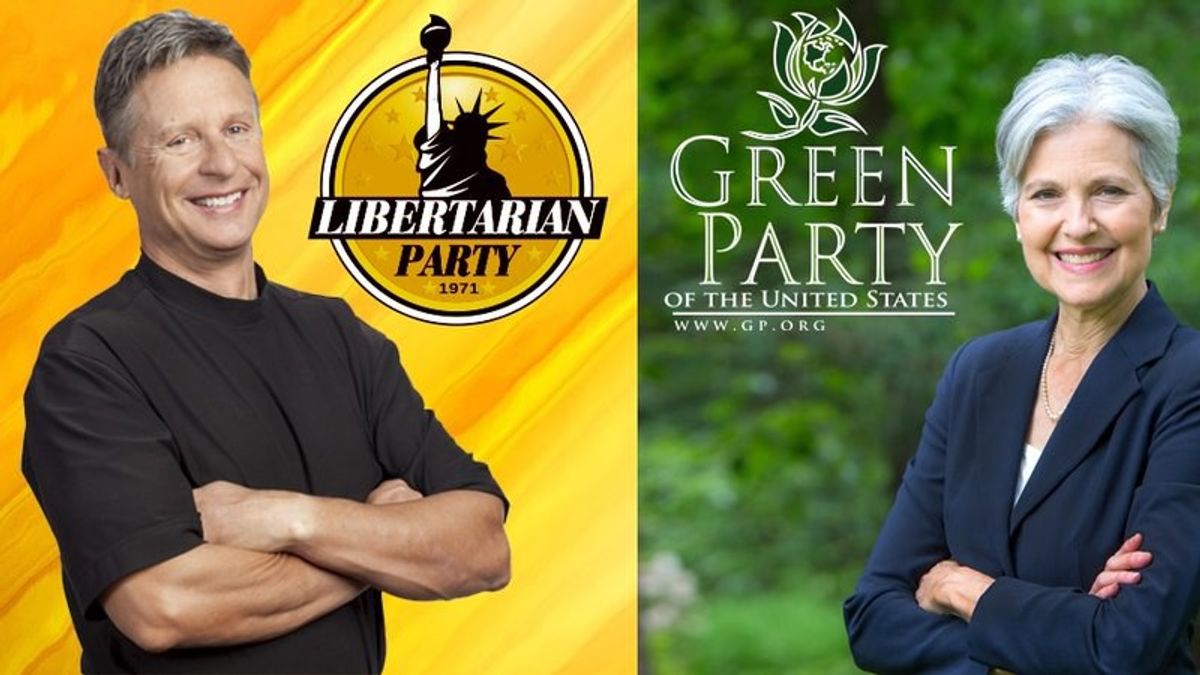 America has dealt with the consequences of a two party system of government for a very long time. Although many third parties do exist and often have an impact, they haven’t had a real run for the high office since Teddy Roosevelt. Only two non-establishment candidates have even won electoral votes since, both being segregationist during the civil rights era. This year could be different! This election cycle has clearly been unique, but it could be the first time in a long time that the American people stand up and say no more with the status quo! Millennials are now a huge voting block if we would simply embrace our voice.


Tens of thousands of Americans, many of whom were millennials, turned out to see Bernie Sanders share his message of real revolutionary change. It seems as though Bernie may be taking a voluntary back seat to Hillary in order to inspire change from within the Democratic Party, but this does not mean the revolution is over; we can keep it going for ourselves. We have other options! Many millennials are desperate for change but are willing to have more of the same in fear that things could be worse. Therein lies the problem with our system: it relies on fear-based complacency to maintain the status quo.

Our government is in need of an alternative. A two party system is simply polarizing. The two party system creates the illusion of choice as the two parties appear to be different, but are often puppets for the same big money, in our case big money. Additional parties bring balance to the system. With parties on the far right and far left it is harder for the two establishment parties to justify their existence. America has had other major parties in the past (wig and federalist) so it is not a strange idea to embrace another party. Embracing non-establishment parties can benefit the people as it challenges the establishment and pulls the middle parties left and right creating more diversity among candidates. This is why alternatives are good, and this is why I am encouraged to push for free choice in our voting marketplace. The best alternative to our broken system is another candidate, the Green Party's Jill Stein. Although she is one of many non-establishment choices, here are some reasons we should all consider voting for Jill Stein.

Much like Bernie, Jill Stein doesn’t take corporate money and depends on people to fund her campaign. She has raised almost $700,000 with 0% coming from Super PACs and 100% from individual donations. Jill Stein is not owned by corporations and has the freedom to affect change without any money interest in her way. Furthermore, Jill Stein believes in a system where politicians aren’t also fundraisers. She sees the simple act of asking for money as a promise to repay and would fight to get money out of politics.

Jill Stein believes in putting people and the planet ahead of moneyed interest. Jill Stein’s Power to The People Plan has a foundation of ethical principles. She believes in creating jobs while also transitioning to 100% renewable energy. She believes in jobs, healthcare, and education as human rights. She believes in a $15 minimum wage and ending poverty through social programs guaranteeing Americans food, water, and shelter. She believes in ending police brutality and protecting LGBTQAIP+ rights. Furthermore, ending mass incarceration and restore our constitutional rights (putting an end to unwarranted surveillance and indefinite retention).

Jill Stein is determined to cut military spending by 50 percent and close many of the military bases around the world that are simply establishing an American empire. Jill Stein wants America to be the leader in nuclear disarmament. She wants to empower people by giving everyone the constitutional right to vote, move toward ranked choice voting (which would help break the two party system), and open debates. Jill Stein is calling for a complete overhaul of our system and the time for change is now!

A vote for Jill Stein is a vote for progress, but it is not the only option. If you, dear reader, are of a more conservative mindset consider Gary Johnson, the Libertarian candidate for president. He stands for more conservative views while holding on to the more ethical side of non-establishment party politics. Either way, a vote for one of these strong non-establishment party candidates would be a strong message to the establishment positions running the currently crumbling two party system. We can stand up as a collective and say we have had enough! It is time to be heard, and it is time for a change, and the most important change begins when we find our voice and cast our ballots in support of the best, not just the lesser of two evils.

Nicole Marie Nigro
Individual Creator
9033
c1.staticflickr.com
Where to start...... Let me start with the cliche that life throws us curveballs and what we do with it is what counts.