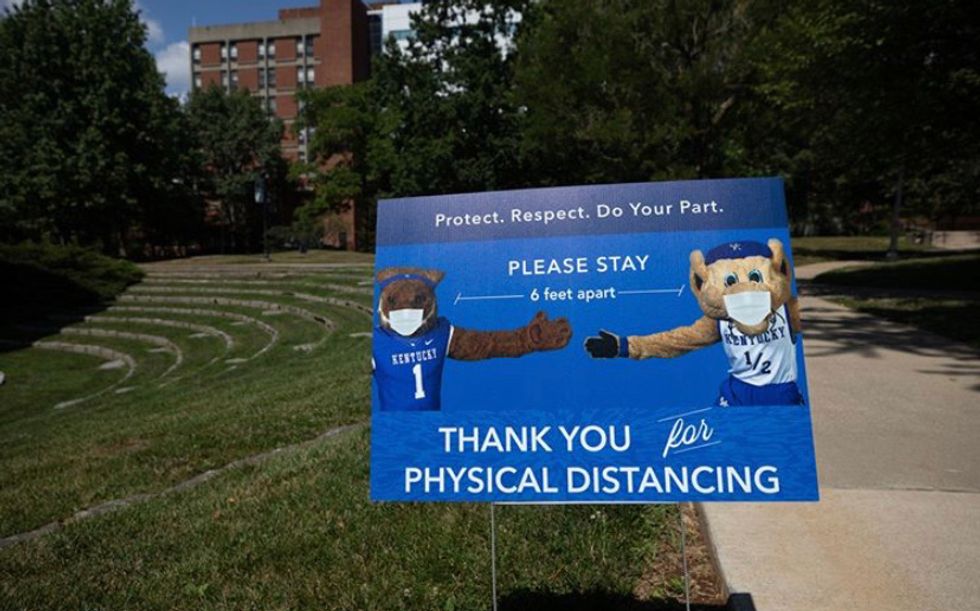 This student-run account has blown up in popularity over the last month or so because of their attention and consideration of all social issues that students are concerned about, as well as their personal experiences on campus with such issues. Although their namesake specifically references the Black Lives Matter movement and racial disparities on campus, their inclusion of a wide spectrum of issues prevalent in students' lives has drawn much attention within the UK community.

As the morning went on, they shared several dozen responses from students on their Instagram story, adding in their own commentary. Responses included the following (with the account's corresponding comments in bold):

Response: “If we don't have to go fully back online in two weeks I'll be shocked."

Response: “It just seems like we have no info on how to keep us safe. Also, I wanna know how many cases before they shut down? Because one bad party and game is over."

@blackatuk: "This is true, it needs some level of awareness of students and there are certain students who won't be social distancing at all."

Response: “It's irresponsible. there's more holes than UK can cover up. Using our money in place of our lives... You could be doing everything right and you get sick cause of your roommate."

@blackatuk: "Exactly! There's a lot of blind faith in students in the plan they are pushing out. It needs a balance of trust but also stricter safety measures!"

Upon receiving all of these responses, the Movement for Black Lives UKY, which is partnered with Black at UKY, posted the following tweet:

They went on to describe their concerns surrounding the University's choices on testing faculty and staff, inconsistencies across class requirements, and inadequate plans in the event of a campus COVID outbreak.

The official University of Kentucky Twitter account then responded, highlighting that they will be following national professional recommendations by testing students. This response seemed irrelevant, as the original tweets calling them out never said that students shouldn't be tested; rather, they said that testing everyone only one time as soon as they get to campus is not sufficient.

Students, alumni, and community members had all begun responding to the original tweet, sharing their issues with the University's plans in coming back in one week.

As the back-and-forth went on, the University of Kentucky account grew chastising in their tone. They seemed to be avoiding people's actual arguments and refused to acknowledge that parties and social gatherings out of their control will almost inevitably cause an outbreak of COVID on campus.

Not only is this answer dodging all of the questions asked of them, but it is also entirely unprofessional. This tweet quickly received several dozens of responses not only from the original account but from students and alumni who were incredibly disappointed by this response. Almost every comment under the tweet pointed out how the University seemed to be talking down to students, and dismissing and downplaying their concerns.

Not only that, but this response from the University is completely tone-deaf and ignorant.

Any college student who has watched the Snapchat stories of their peers this summer knows that an alarming number of students have been consistently partying and not following social distancing for the last five months, and acting as though the pandemic is simply not happening. The fact that the university is chastising the completely logical concern from the most responsibly social-distancing and mask-wearing students, rather than listening to us (seeing as we know our peers better than they do) is horrifying.

As a leader on campus, I'm mortified that this is the behavior I have to represent in our community.

So far, the University's tweets are still up, and there is an entire thread of arguments and discussions taking place between them and students that is public for anyone to see. Unsurprisingly, all of UK's tweets only have a handful of likes, with a very high ratio of upset comments in response.

The University of Kentucky needs to reevaluate whoever is responsible for their Twitter account. They need to make clear to students whether they agree with the person running their page. Most of all, they need to actually address the concerns of students, rather than dodging them and restating the same old information over and over. We are tired of that.

People's lives are at stake, and we shouldn't be talked to like children for wanting more transparency and accountability. Students expect and demand better because we know that our school is capable of better.

Move-in starts in just a few short days. I hope that the University takes our worries to heart. If not, they don't get to blame students when things (almost inevitably) go downhill.

I Asked 27 People What It's Like To Be Part Of The LGBTQ Community In The Trump Era, And It's Time To Bring That Passion To The Polls

Some may even call it The Discrimination Administration as they point to Trump's Timeline of Hate.

No matter what your political affiliation is, it's important to recognize that, right now, we have an administration that objectively discriminates against marginalized people. Some even call it the "discrimination administration" as they point to Trump's "timeline of hate."

Hence, I want to do all that I can to share the voices of the underrepresented LGBTQ community, especially since Supreme Court nominee Amy Coney Barett is a threat to their rights. From restrictions on LGBTQ folk in the military to the anti-trans rhetoric and anti-LGBTQ discrimination in healthcare and adoptions, there are way too many actions taken that directly harm the LGBTQ community.