First UC Berkeley Undergraduate Student Workers Union Formed In Response To Harassment And Maltreatment
Odyssey
CurrentlySwoonLifestyleHealth & WellnessStudent LifeContent InspirationEntertainmentPolitics and ActivismSportsAdulting
About usAdvertiseTermsPrivacyDMCAContact us
® 2023 ODYSSEY
Welcome back
Sign in to comment to your favorite stories, participate in your community and interact with your friends
or
LOG IN WITH FACEBOOK
No account? Create one
Start writing a post
Student Life

A Berkeley undergrad loses their job and diploma after addressing harassment and unsafe working conditions. 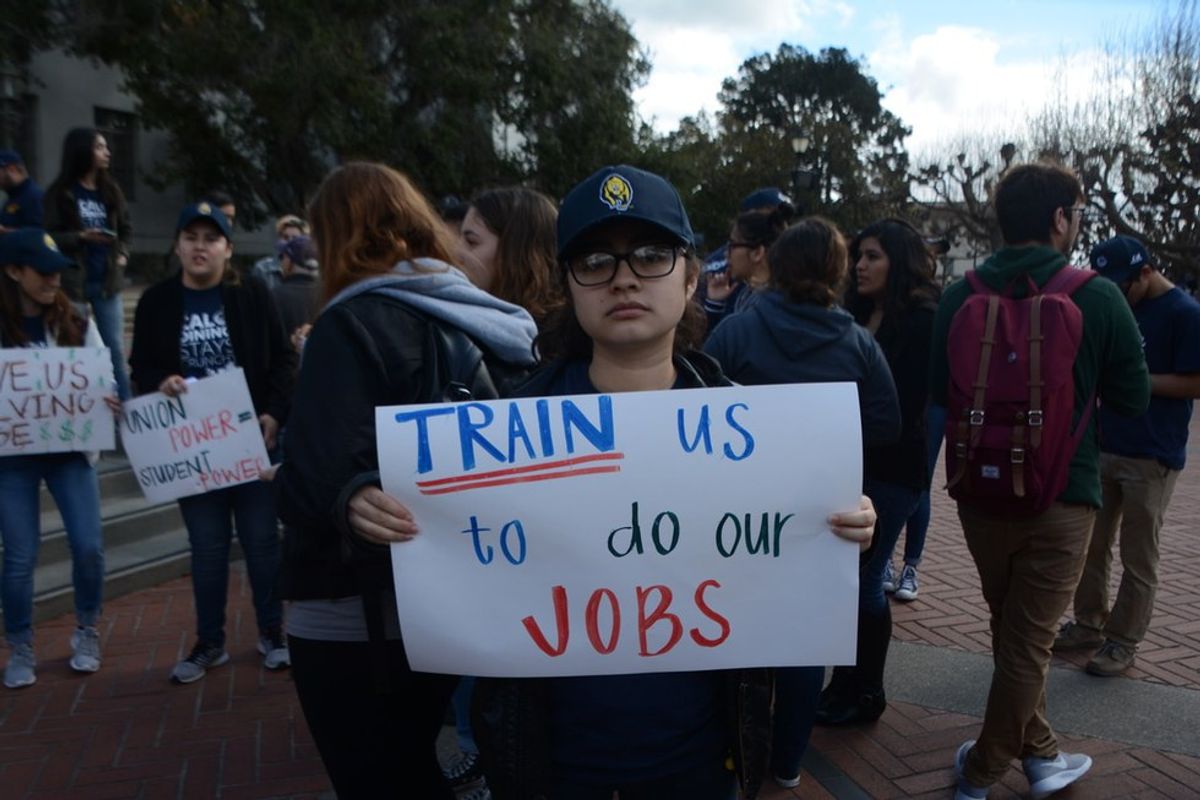 In a 48-hour period, the Undergraduate Workers Union (UWU) at UC Berkeley went public and demanded recognition from administration for workplace violations specifically targeting dining commons employees. Two days went by with no response. So, the UWU raised the volume. At the women’s strike on Wednesday, March 8, they were there, holding up their handmade canvas signs and calling for action. They’ve also taken to the Internet, where they have a rapidly growing social media presence, encouraging student workers to join the union. On Sproul Plaza, students can listen to their disquieting stories and be affected by the community’s rage.

Transgressions towards students include sexual harassment, exploitation of cheap labor for a scant wage, dangerous and unsafe working conditions, and inadequate training. After some student employees spoke to their managers about individual concerns and received no response, they came together to form a larger, louder working student body to counter Cal Dining’s deafness and inaction. Thus began the UWU, the first of its kind in UC Berkeley history[1].

It’s natural to expect our capitalist system to be hostile to unionization. Employees gather the courage to speak out against violations and violence in the workplace, employers suppress collectivism for fear of losing their own jobs and shaming their reputation, and thus, the leaders or members of the opposition are swiftly fired for demanding to be valued in the hierarchy of laborers. Every worker is vulnerable to the fear-provoking, self-perpetuating tornado. Grace Lin, a former Crossroads Dining Hall employee and student of the cobwebbed UC Berkeley bureaucracy, is no exception.

I met Grace tabling on Sproul alongside fellow employees. Various students held up signs and gave out informative flyers; all were distinct in their uniforms, a navy-blue and California yellow baseball cap with a Fruit of the Loom t-shirt, displaying the colors of Cal. As Grace told me their story, the blue and yellow seemed to take on a darker hue.

Grace was fired under the premise of a student registration stipulation that Cal Dining rarely enforced. The real crime? They had complained the week prior about harassment and other safety concerns.

In order to keep up with the cost of living, Grace had to resign from school in September 2016: “Last spring semester I had to work about 30 hours a week on average to cover my cost of living while also going to work. This is because they don’t pay us a living wage.”

Students Need a Living Wage to Survive and Attend School

It was practically impossible to work almost full-time and also attend school—a full-time job in itself. Grace had to make a decision: work or school? Survival was her main concern, so the latter had to be sacrificed. Many other student employees deal with the stressful mediation of the two, especially considering the financial burden of the annual tuition hikes.

To keep up with rising tuition, a living wage is one of the several demands the union is making. Grace explains, “We’re supposed to get semester wage raises. We don’t get them typically, or they eliminate them after a few semesters because the minimum wage increases and they’re like ‘that’s justification.’”

Other demands of the UWU include:

For what seems like a requirement, Cal Dining employees have no job descriptions. This is so Cal Dining can easily change what the employees do, whether they are qualified or not, without their permission.

Niki, another union member, says that management “constantly changes what our ‘job description’ is so that we’re doing more.” If a person is untrained and unqualified to handle, for example, the 500-degree pizza ovens, they should not legally be working the ovens. Yet, students are left with little to no training and a mere “go ahead” from the boss. Considering the heavy machinery being lifted, the sharp kitchen weapons being used, and the all-around burning temperatures, the dining hall is no place for negligence.

Continuing the litany of injuries, Niki adds, “A worker refused to work for personal reasons on a specific job that she wasn’t trained for. Another manager just laughed, told her to get a career to teach her for a couple of minutes and she’ll figure it out. This is a typical training session at work.” Laissez-faire management approaches to training leave employees and customers unprotected. Cal Dining has made it nearly impossible for students to remain open and honest; after all, doing so puts their jobs in jeopardy, and may hinder their ability to pay tuition.

Once again, we bear witness to the true ethos of the university: We don’t care if you’re being harassed. Just give us all your money and we’ll teach you some things. Oh, but don’t bother applying those things you learned in school to real life, because we don’t follow our own teachings! You’re on your own! Ha ha!

A Safe and Just Workplace

Because there is no formal process for complaints and concerns, there is no anonymity or protections when a victim discloses violations to their manager. Students feel too unsafe to notify management. Nikki reiterates, “They don’t even have a formal procedure for us to go through to report harassment. Our reporting procedure is telling our managers, some of whom are the perpetrators.” A student is less likely to report an offense if their offender also happens to be their manager—it’s counteractive. That’s like telling on Trump to Trump—nothing is accomplished and Trump remains in power.

Sexual harassment is a common violation at the Cal Dining commons. One student admitted to being “pinched and massaged” by a Foothill manager, while another student claimed to have been “physically touched in ways that I’m uncomfortable with, like lower back, caressing, massaging…” Like we saw in Grace’s case, speaking out about harassment can result in an employee’s dismissal as management allows the offender to go by unscathed. Nothing has been done to penalize the perpetrators—the university has remained silent and the managers continue to work and run the show, despite posing as threats to student employee safety.

Students have to choose between coming to work sick or staying home and risking their job security. By not having paid sick days, the university is sending a message to students that their inexpensive labor is superior to their health. The university doesn’t consider them to be legitimate employees because they are mere students who don’t work full-time. It doesn’t even matter if the employee is contagious or in ill health. As long as they cook and serve the food efficiently and without complaining, all will be fine! Students are helpless under this oppressive ideology; they literally cannot afford to get sick.

UWU also demands rollback on tuition hikes and the deletion of the CNP policy. The CNP policy is the Cancel for Non-Payment. It means that students who are unable to pay upfront 20% of tuition fees before the start of the semester, and before their financial aid is distributed, cannot attend the school. Their college career is over due to inhibited access to their financial resources in time for payment.

Grace explains the reasoning for UWU demanding something outside of workplace regulations: “Because we’re student workers, we understand our exploitation not only as workers for the University of California but also as students…They’ll build half a billion-dollar stadium, but they won’t build affordable housing.” Hypocrisy, student exploitation, and absurd amounts of athletic funding all contribute to student homelessness and hunger. As tuition hikes increase and wages stay low, it’s a sad but common reality for Cal students to study for their upcoming midterm and also worry what they’ll eat next or if they’ll get evicted.

What the UWU Needs Right Now

The rights of undergraduate workers have been ignored, their basic necessities neglected. They are fighting to be heard by a purposely ignorant, silent machine that turns a blind eye to the harassment and exploitation occurring directly under their dilapidated conveyer belt. Student employees are the lifeblood of the institution—threatening their safety and wellbeing to sustain a profit will not be tolerated; students will continue to be brave and resist workplace corruption.

The next necessary step is collective bargaining to repair working relations. Simplified, transparent communication allows for students like Grace Lin to resume what they originally set out to do: get a degree and make a living. The university has been urgently called upon to respond to their demands—will UC Berkeley put its students first?

To show solidarity, or find out how you can join (all Cal undergraduate student workers are welcome) go to their website, and stay updated on Facebook.