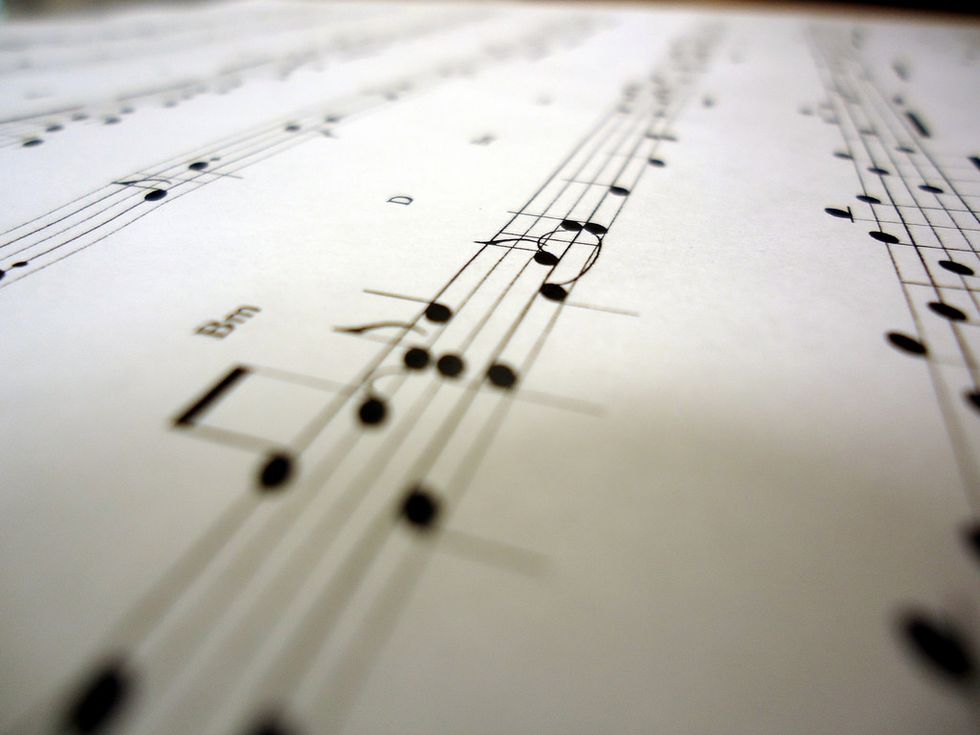 "Thank god the concert is finally over."

"Party at Dylan's house tomorrow night! You don't want to miss it."

I rolled my eyes as I packed up my bag.

"Hey, Maddie! Have any plans over break?" someone shouted over the other conversations.

"Family trip. Going to a ski lodge or something."

"Family trips are so lame. Sucks that you won't be here for the parties."

"Yes, because parties are life." I retorted dryly.

It was the same thing every year since we all entered high school. There was always some sort of party going on. I'd never been to a single one. Partying wasn't my thing which anyone who actually knew me was aware of.

"Ah, come on Mads. Live a little one of these days."

I turned to see my best friend Fletcher who gave me a wink before turning his attention to the group discussing Dylan's party. He fit in a lot better than I ever had and was the self-proclaimed "king of the band geeks". Naturally, he thought that also included anyone remotely involved with the music program.

"So Fletcher, are you coming to Dylan's party?" Carrie, one of the more popular girls, asked while twirling a strand of her curly red hair around her finger.

"Nah. Family trip. Next time though."

"Oh, okay. Next time then." Carrie said, disappointment clear on her face.

I shook my head and laughed to myself Fletcher had never gone to a single one of the parties thrown either. I glanced over at Carrie who was clearly pouting as Fletcher made small talk with some of the other members of the band.

I felt my phone vibrate in my pocket. Checking the screen, I saw a text from my mom letting me know she was outside.

He waved as we walked out of the auditorium. As we made our way down the school hallways, Fletcher hummed to himself.

"Haven't had enough of them yet?" I muttered annoyed.

"They're catchy and you know it."

He playfully shoved his shoulder into me.

"We've been practicing them for months. I'm okay if I never hear them again."

Fletch let out a laugh.

"You know your mom is going to be playing the Christmas station the entire way to the resort right?"

"And this is why they invented iPods."

"Right, leave me to fend for myself with your mom's terrible taste in music."

We exited the doors into the cold, night air. I looked for my mom's car but didn't see it. Typical.

"I thought you said she was here?"

"She was or at least she texted me saying she was."

I bundled my coat tighter around me as I called my mom. She finally answered after the fifth ring.

After a long-winded explanation from her about her deciding to grab us all hot cocoa, how Fletcher usually took longer to say goodbye and how she'd forgotten to let me know, she finally showed up. We piled in quickly. I immediately lifted my hands to the heater vents in order to warm them up.

"So, how was the concert?" My mom asked in her usual chipper tone.

"It was pretty great. Carol of the Bells was probably the best song from the concert."

"Wasn't that one both the band and choir together?"

"Yup. It was totally awesome."

I stared out the window as the two continued talking. I zoned out as I watched the snow covered trees pass by. I must have dozed off because before I knew it we were dropping Fletcher off at his house.

"Thanks for the ride, Mrs. Price! See you tomorrow!"

He waved one last time before disappearing into his house. As we drove home, my mom kept giving me sideways glances, which meant something was on her mind.

"Mhm. Spill it, mother. You know you're going to anyways."

"Well, it's just, you and Fletcher spend a lot of time together."

"He's my best friend and we're in most of the same activities. Of course, we spend a lot of time together."

"No. I just mean, have you ever thought that maybe you two were more than just friends? Is there anything you need to tell me about that? You two have been inseparable for forever, so it's natural if feelings bud up."

I let out a startled laugh. Fletch and I together?

"Mom, really, we're just friends. We don't think of each other that way."

"If you say so, honey. You would make a cute couple though."

"You could have one of those cool "ship" names everyone goes on about. Oh, it could be Match!"

After getting home, I quickly said goodnight and headed upstairs to my room. I threw my bag on the floor and plopped down on my bed. Just as I was getting comfy, my phone pinged with a text. It was from Fletcher.

"Mom decided to grill me about our relationship."

"Explained to her AGAIN that we're just friends."

"Take it she didn't believe you?"

"She said our ship name would be Match."

"Can't. We have a road trip tomorrow. I refuse to suffer alone."