The Case for a MUCH higher Minimum Wage
Odyssey

The Case for a MUCH higher Minimum Wage

If you buy chunks of my life it better be for a good price! 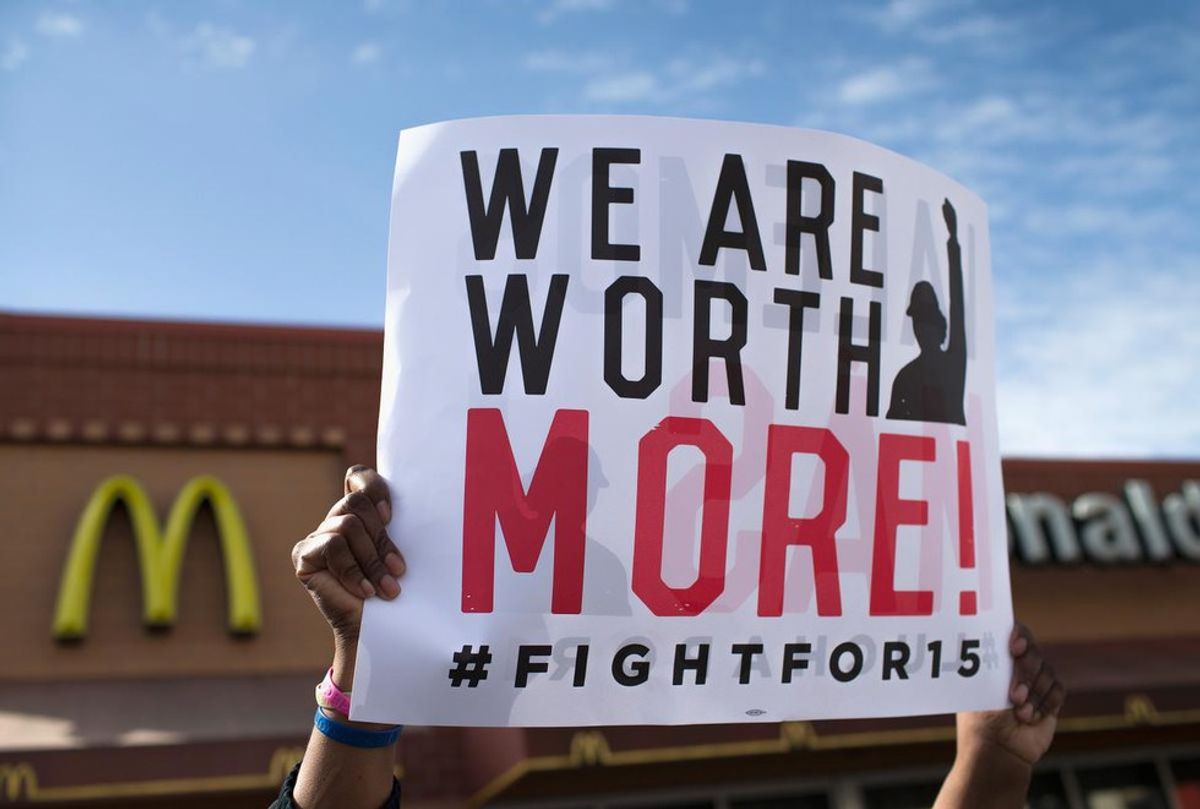 The minimum wage debate has been going on in my circles for a while now. It was a big topic during the democratic primary with candidates discussing how, when, and by how much to raise it. There are two main camps in regards to this debate with most individuals being on a spectrum. Some believe that it should be raised and some believe it should not. The ones who do believe it should be raised are often on a spectrum as most disagree by how much or how fast. For this article, I will be arguing for a $15 minimum raised over a number of years.

The main argument is that minimum wage jobs are not made to be permanent jobs, or not meant to raise a family on. The counter argument is that all Americans deserve a “living wage” that is, a wage that is high enough to maintain a normal standard of living. I would argue a living wage would be a wage on which one can live above the poverty line when working full time. To understand why I promote the second argument, and why I find the first infuriating, it is important to understand the state of the current American economy.

Henry Ford famously paid his workers a robust wage of $5 a day. In fact, throughout most of the 20th century, Ford and other car manufacturers were known for paying good wages. This was great especially when companies such as GM were some of the largest employers in the country. Remember when Americans made things? That is no longer the case in America today. We are now a service based economy, meaning most jobs are in the service industry. This is the point when many would say “Bring the jobs back!” which is a nice sentiment, but if you want to continue to buy from retailers such as Walmart or Amazon that isn’t happening. Can you compete with the sweatshops in Asia? No, and that is why we need to accept that we will not be a production country again. Well, that and the fact that robots will soon out sweatshop workers out of business as well.

So with our service based economy why is the minimum wage a big deal? Why can’t people just get better jobs? The truth is that according to the According to the Economic Policy Institute's State of Working America, a stunning 35 million Americans – 26 percent of our workforce – earn less than $10.55 an hour. That is at or just above the poverty line depending on if you have another person in your household. (non-working spouse, kid, or sick parent). Many of those people have families especially considering that our largest employers are now companies like McDonalds and Walmart. Now many of you reading this are probably thinking one of two things. 1. I make that and I understand the struggle. 2. I make that and I do just fine. The problem with the second response is that it is usually because 1. You are a single person without any extra bills or dependents, or 2. You do not realize that it is not normal to work sixty hours a week and have little savings left. Now I am sure some of you are getting along fine and that is great! But many of us are struggling with bills, rent, student loans, or especially in my case medical bills.

If you made it this far and are with me great! Now let’s talk about the issue at hand, why is a minimum wage increase the answer, and why won’t it make the cost of living go up to a point at which there is no difference? The answer is in how the American economy grows. The American economy depends on the flow of money. If the money does not flow, then there is no growth. Think of it as a water turbine. Energy is created more abundantly the faster water passes through, but if the water is moving slowly or stops entirely no energy is produced. Our economy works the same way. When the rich get access money what do they do with it? They save and invest it. While it is tucked away it is not moving, the water is not creating energy. What does a middle or working class person do with their money? They spend almost all of it! The middle and working classes are like a strong flow that pushes the turbine rapidly and creates lots of energy. This is why we need a thriving middle class in America to have a strong economy. But right now the middle class is shrinking and our economy is suffering because of it.

Part of the solution I stand behind is raising the minimum wage. Raising the minimum wage puts more money in the hands of the middle class who spend it and move the American economy. It pulls the working class up into the middle class which grows and stimulates the economy. But won’t prices just go up? Well yes,a little, but not as much as how we will benefit. So let us say the minimum wage goes up to $15 an hour. My burger restaurant has four employees and we need to give them all a raise of $7.50 an hour (for simplicity). And let us say that they each work full time 40 hours. That is a whopping $1,200 more per week! But let’s consider volume. I also sell 1,000 burgers a day, less than a fast food joint. That is 7,000 burgers a week which means my price goes up 17 cents apiece. Isn’t that horrible! Now thanks to my price increase my workers make double what they were making which means they can spend double. That money goes into the community which then means more customers for my shop. This, in turn, means the cost can go down slightly. On top of that, all this movement has created tremendous growth for the economy. Now isn’t that worth it? My workers come out of poverty, my community benefits, and I feel nothing in my own pocket!

This is the truth of our situation. This is why we need a drastic raise to minimum wage. It wouldn’t hurt us as you have been told. The fact is the rich want you to believe that because they want to keep your money. They say that with a higher minimum wage your jobs will be replaced by robots, but guess what? They will anyway! People who have to care for themselves and provide for their families will never be able to compete with a machine that can work 24 hours a day with no breaks, no food, and no one to support. Not to mention aren’t humans inherently worth keeping out of poverty? Doesn’t a person’s life, literally hours of their life, warrant a decent wage? It’s time we fight for the living wage we deserve. Let’s get the waters of progress flowing and create an energetic economy!