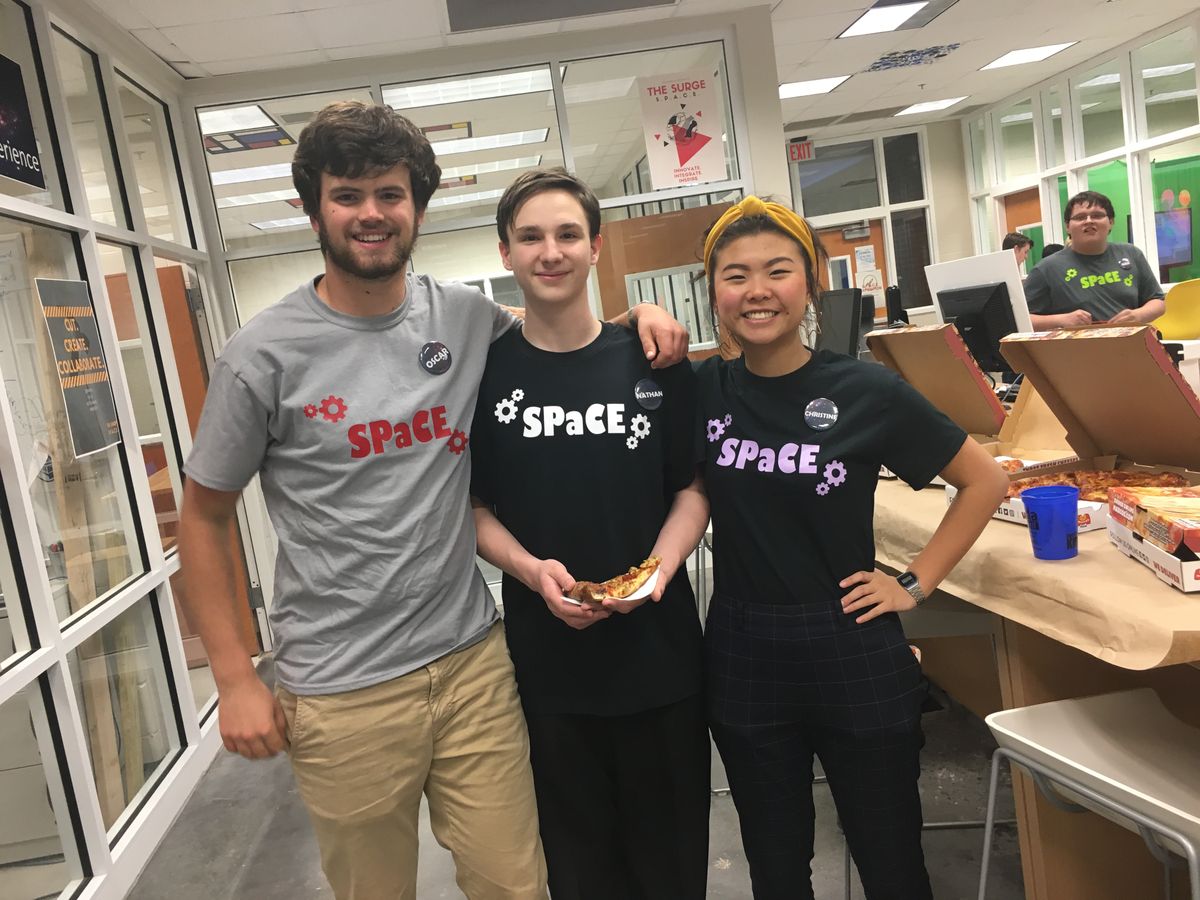 On Wednesday, May 2, 2018, Centennial High School hosted their very first SPaCE (Shared, Personalized and Creative Environment) exposition in which students from the school showed off their projects that had been created in the state-of-the-art maker SPaCE in the school media center.

I was one of the original "SPaCE cadets" who help other students learn by sharing my knowledge of the tools in the SPaCE, and I have earned two honor awards for my participation in the maker SPaCE programs.

What is the SPaCE?

The maker SPaCE is the Shared, Personalized and Creative Environment in the Centennial High School media center and was based off the invention studio at the Georgia Institute of Technology.

The goal of the SPaCE is essentially to provide students with the opportunity to educate themselves in STEAM (science, technology, engineering, art and math) topics through projects. The main idea of the SPaCE was to allow students to take their dreams and creative ideas and turn them into realities using the latest technology like 3D printers, laser engravers, automated embroidery and sewing machines, film production technology, raspberry-pi microcomputers and power tools.

These utilities allow students to create just about anything they could imagine, whether it be a school project, a national competition or even just a personal STEAM based project they would like to create.

How does it work?

Safety is a priority, so in order for students to utilize the tools in the SPaCE they must first fill out a safety contract similar to those used in science labs. Next, the students must complete short quizzes to demonstrate their proficiency in using tools properly in order to be certified to use them.

The SPaCE has three rooms that students can work in and each room has a specific use.

The first room, "The Shop," is filled with fabrication tools and sewing materials. The 3D printers and the laser engraver are the favorites among students because of their power to create incredibly detailed physical at a high rate of speed. The automated embroidery machine is actually the most expensive tool we own to the surprise of most people and it has the ability to quickly stitch designs into fabric in a multitude of colors.

The next room is called "The Surge." It is the computer center of the SPaCE and includes micro-computers, electronics, robotics and soldering stations.

One of the most amazing things that I have seen in the surge is a hand built computer. And I don't mean they assembled parts bought online, I mean they built the computer wire by wire and it was able to add and subtract in binary and store numbers.

The final room is "The Studio" which is used for film and music editing and creation. Some pretty interesting videos can be made with the combination of high grade cameras, microphones, editing software and a large green-screens.

Why have the SPaCE?

The SPaCE has a few main goals. The primary target of the project was to test it as a prototype in high schools and see how to effectively run an area like this in a school. The secondary goals are to allow students to learn independently about technology through self lead projects and to incorporate STEAM into other classes. For example, we have students from math classes come and 3D print models of mathematics concepts ranging form basic geometry to college level 3D calculus.

With new additions coming to the SPaCE every few months or so it seems like we may have an endless supply of money, but in fact, we just have some very talented writers. The project was initially kicked-off by a large tax donation given to schools across Fulton County, but as time passed and we came up with new ideas, we began to rely on grants to get the money we need in order to make purchases. Students team up with the teachers to write grant requests to organizations like the PTA and college associations and with a large amount of success.

My personal thoughts on the SPaCE are that...

SPaCE has been an incredible experience that has helped me grow in a number of ways.

I feel that my creativity has been revamped and my craftsmanship has improved tenfold. Along the way I have also had the pleasure of working with some amazing people. Not just students that asked for help, but also my fellow SPaCE Cadets, teachers and interns that I worked with on projects and in the SPaCE. While this is still just a prototype at my school, we have reached out to other schools in hopes that other students will get to experience and learn from a STEAM based learning program.

Creations of the SPaCE

Here is a short collection of inventions and creations by students at Centennial!

Max Blafer used advanced 3D printing techniques to create interesting models next to some balloon animals to draw the attention of visitors at the 2018 SPaCE expo.

A memory game made by Nathan Jacobi. I scored 12 and the highest score at the expo was 14!

A model of the solar system made out of paper, PVC pipes and lit by LED lights, created by Oscar Lee.

This expandable zipper bag and wall decor was hand crafted by the Centennial class of 2018 valedictorian Chloe LeCates.

This contemporary succulent display was mad by Olivia Katz. The containers were 3D printed and the turntable was made out of a lazy-Susan and a recycled microwave motor.

One of the most creative things every built in the SPaCE is this single can mini fridge made from a recycled fire extinguisher! Designed and crafted by Colin Kane.