Social Media Stupidity: Why You Should Be Careful Of What You Post
Odyssey

Social Media Stupidity: Why You Should Be Careful Of What You Post 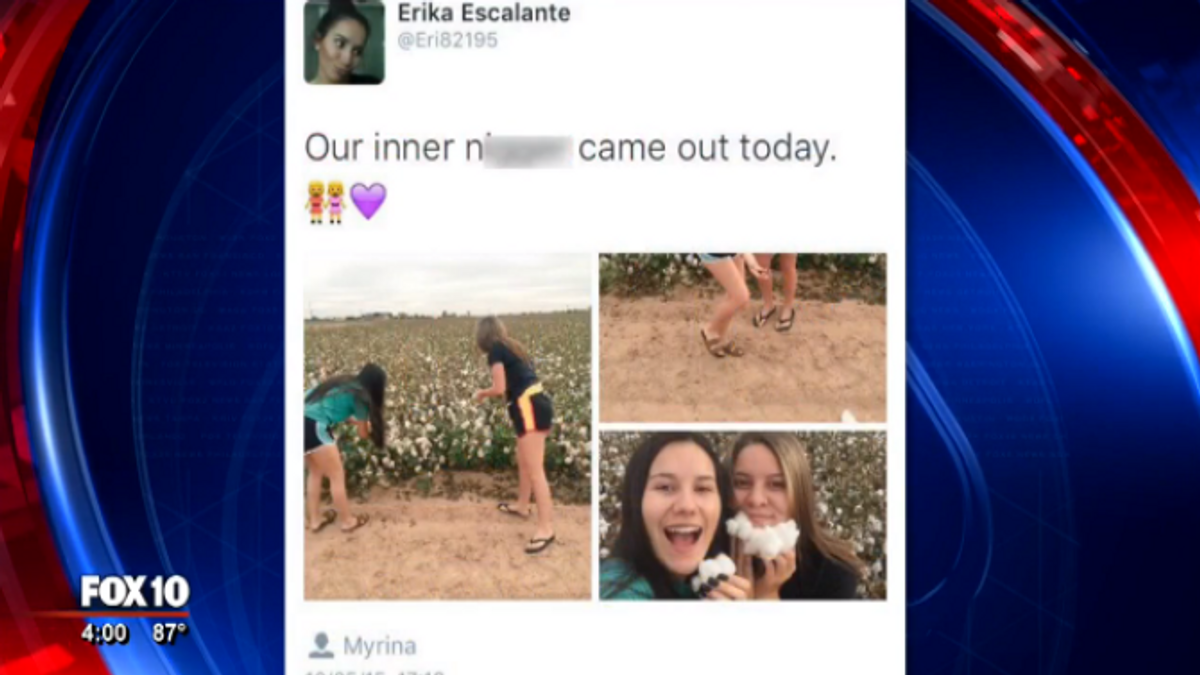 Escalante’s tweet was accompanied by a picture of herself and her friend picking and holding cotton with the caption, “Our inner [n--ger] came out today.”

Fellow Twitter user @XLNB, a USC film student who goes by “X,” saw the offensive tweet and proceeded to take action. He tracked down Escalante’s Facebook page which mentioned she was an intern with the Chandler-based company Isagenix.

In a tweet which has been retweeted almost 5,000 times, X tweeted the picture of both Escalante's original tweet and a picture of her Facebook page which showed proof of her internship with Isagenix. The caption of his tweet was, “Excuse me, @isagenix do you know that your intern @Eri82195 is using racially offensive words & images online?"

Isagenix promptly responded by tweeting, “We too find this tweet offensive & we are shocked. This does not reflect our values & culture. The intern is no longer with us.”

In a matter of minutes, Erika Escalante was terminated from her internship and became a national pariah on Twitter for all the wrong reasons. That one moment in time at 5:18 pm will most likely haunt her for a long time to come.

Unfortunately, cases like this (although possibly not as extreme) are far too common in today’s age of technology and social media — especially amongst teenagers.

Underage students posting selfies on Facebook drinking alcohol, curse-laden tweets directed at a peer and even Instagram posts of money supposedly derived from a drug deal all appear more often than we might think.

While these posts don’t seem to be a big deal in the present, they can cause huge grief in the future, especially in regards to future employment.

According to recruiting service JobVite, 93 percent of employers will review a candidate's social media before making a hire. Even more, an incredible 55 percent of recruiters will reconsider a potential employee based simply on their social media profiles and 61 percent of these reconsiderations were negative.

It’s not just the average student who needs to be cautious in avoiding making social media mistakes. High-profile celebrities, politicians, etc. need to be careful as well.

Take for example former Congressman Anthony Weiner, who infamously and ironically direct messaged another Twitter user his...well...wiener. Following the scandal, neither Weiner was heard from again.

Even large companies aren’t immune to screwing up in front of their thousands of followers. In 2014, DiGiorno Pizza posted a tweet which read, “You had pizza,” with the hashtag #WhyIStayed. Apparently unbeknownst to DiGiorno, the hashtag, #WhyIStayed was being used in a conversation to highlight the horrific nature of domestic violence....not exactly the topic you want to bring pizza for. DiGiorno soon deleted the tweet and issued an apology claiming they did not know what the hashtag represented before sending the tweet.

If you refrain from being stupid and think before you post you will be well on your way to a stress-free enjoyment of vines, tweets, Instagram, Facebook and any other social media in between.