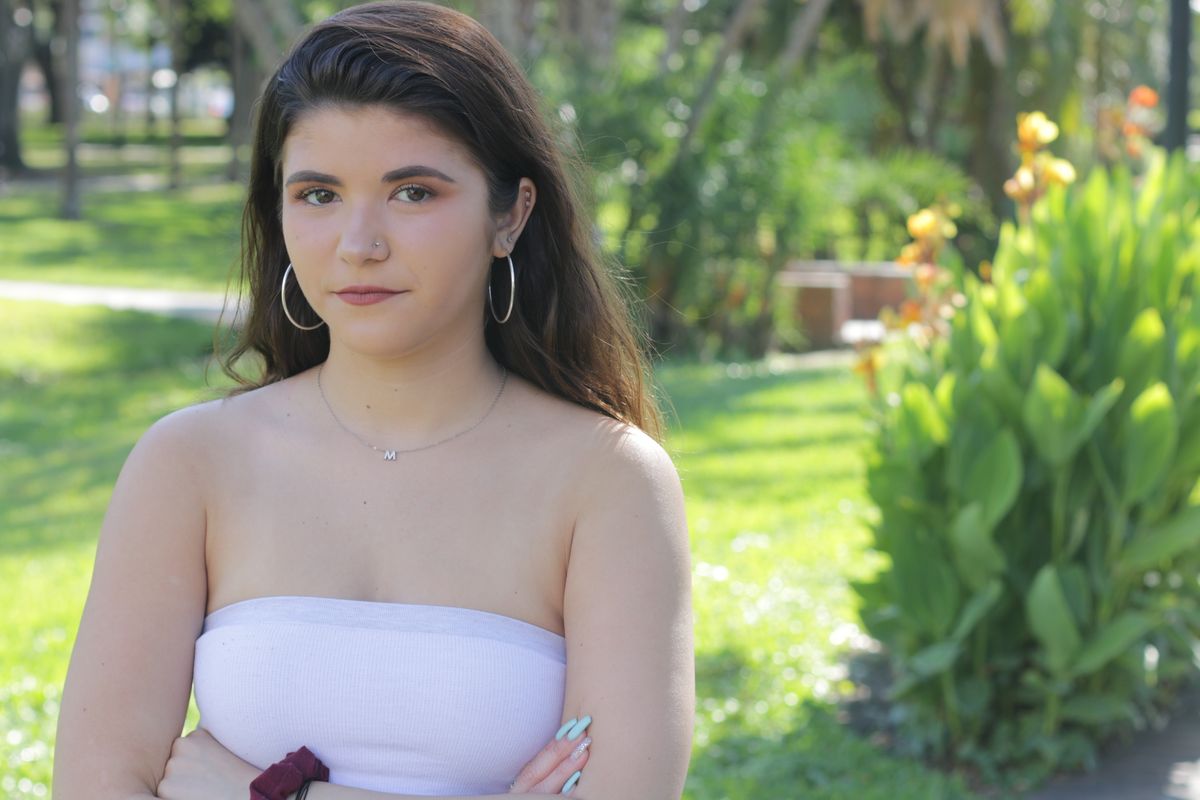 Dark hair, pretty with a loud mouth. She pissed her mother off one night when she went over to her friend’s house with the intention to put a ring in her nose, cut a slit in her eyebrow, and smoke Doja until she passes out. Her mother didn’t know it was the persistent nagging that drove her away. The loud fights her parents would participate in that pushed her out the door. No one knew but her.

The one you know in the back of the classroom. She listens to music that questions her mental state. The one who talks about how this life is not for her. She dresses for others not for herself. Who wears too much makeup to cover up the beautiful face she doesn't know she has. Underneath that cold shell she puts around herself, is a lovable, understanding person held down by chains of insecurities and self-loathing.

She takes pictures of herself every day. None of them show her face but her body speaks louder than her mouth ever could. Rather than speaking for herself, she allows her appearance do it for her. The statement she is presenting is not one of desire, its one of desperation.

The only attention and affirmation she cares for comes from a male audience. They do not know her, care for her, or understand her. She is in need of fulfillment. She is empty and unaware of the hole. When the men come and go, the hole ends up just getting bigger and bigger. With her mascara running, swearing to everything imaginable that this will never EVER happen again. Then justifying the next one with, “he’s different”. How so? She cannot answer.

Nevertheless, she is a good person. It’s just the person isn’t good.

She is developing an independent lifestyle and is constructing a very open-minded person. Never will she judge another soul for something similar to her struggle. She will actually be more understanding and believe that no matter what happens, good will come. The person whose heart and mind are snared with transparent happiness, will change paths for people without realization.

Her testimony will correct incorrect mindsets. Her stories will warn unaware thoughts. Her past will change someone’s future.

The only thing that will fulfill her is her. Herself. Nothing more. Once she gets past all the shame and the emptiness it will begin to happen. The change. When she gets rid of the pictures that mean nothing. The constant rebelliousness. The men who pass through without a true purpose. Then, she opens her eyes to herself. Her dreams and admirations. What she wants to do and forgetting about the attention from others. Figuring out want she likes without having it to be affirmed by another. This is when she will be complete but she still wants something. Something every survivor wants. A life. A reason to wake up and go outside. When she finds it; it will be bittersweet.

When the survivor finds her life. It will attract a crowd of people she would have never found. A crowd that pushes her, challenges her, and pursues her in order to see her succeed. This will also translate into her romantic relationships. She will be chased after because of her strength. Her scars and conquering nature will be irresistible. But they will not depend on each other, they will compliment each other is such a bright way it will be inspiring. They will pick each other up when they are down and support them until the end. It was never her purpose, for her purpose is something greater she has yet to foresee.

Dark hair, pretty with a loud mouth. The one who sits in the back of the classroom. A flower who has been suffering. A ship in a storm. A girl with an undiscovered purpose. A true survivor.