The Party You Need to Attend

The literary gala of the season is here and its attendees think it's murder. 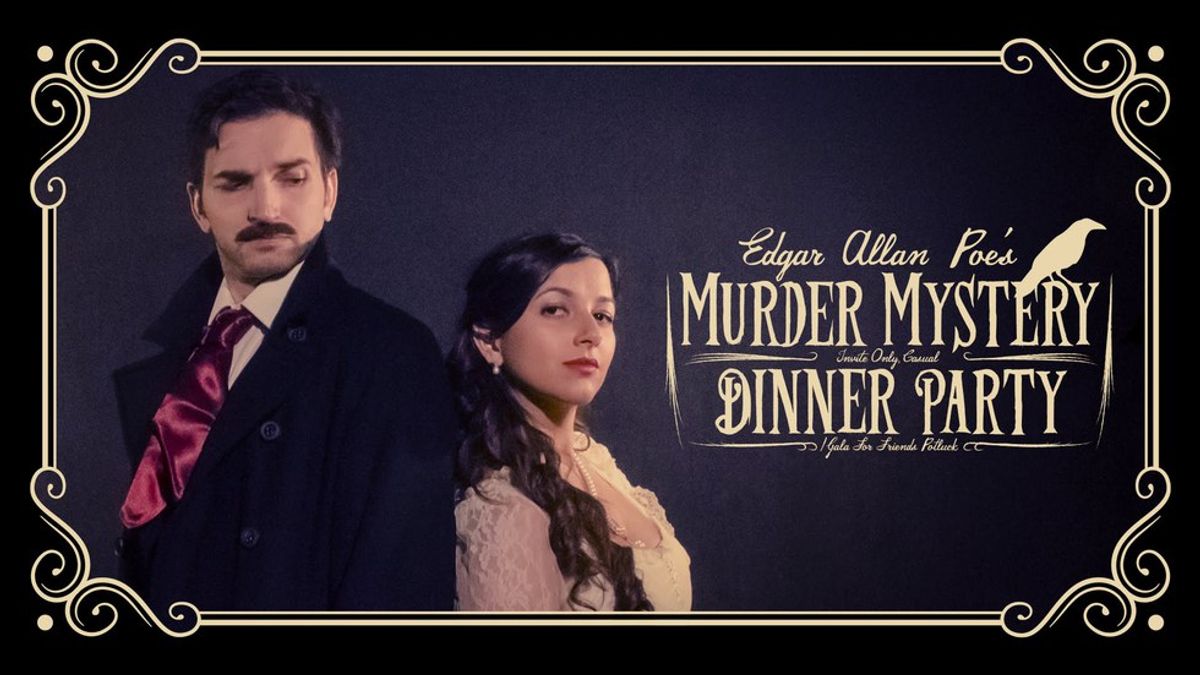 Hallow-month is here! A month-long celebration of everything dark and creepy is finally upon us and long connected with this wonderful time is the Romantic author Edgar Allan Poe.

Poe was an early American literary critic, the founder of the detective genre, and an innovator of science fiction. But most know him for the downright creepy short stories and poems he wrote, including his most famous work, "The Raven." Those who know of him often also know of his tragic life, marked by the death of any woman he ever loved. His death in Baltimore in 1849-- at only 40 years of age-- is still shrouded in mystery.

Such a figure is ripe fodder for storytelling, and in a year of obsession with other historical figures, Shipwrecked Comedy has produced a webseries starring not only Edgar Allan Poe, but many other historical authors as well.

Welcome to Edgar Allan Poe's Murder Mystery Invite Only, Casual Dinner Party/ Gala for Friends Potluck, where everyone shows up expecting a good time and gets murder(ed) instead.

Our leading man, Edgar Allan Poe is played by Sean Persaud, who began the character in 2013 with "A Tell Tale Vlog." His sister, Sinead Persaud, plays Lenore, a ghost who haunts the socially awkward author after her wedding-day death. Together, the Persaud siblings are the writers and creators of the series. One must thank them for their efforts, because the web series is absolutely brilliant. The writing is witty and their real life relationship as siblings bleeds into their on-screen characters, lending an amusing touch to their repartee.

Those who are fans of The Lizzie Bennet Diaries will recognize many of the faces in the rest of the ensemble cast. The Beautiful Annabel Lee is played by Mary Kate Wiles, while Ashley Clements plays a very judgmental Charlotte Bronte. Outside of the Bennet sisters, Jessica Jade Andres briefly appears as psychic Krishanti.

Another web-favorite donating some of its performers is "A Very Potter Musical." Joey Richter plays Ernest Hemingway, inserting himself as a rival for Annabel Lee's affections-- to Poe's consternation. The American author attempts to be suave, but alcohol might have more to do with his cool in the face of murder. Lauren Lopez, known for her portrayal of Draco Malfoy, here plays George Elliot, or should we say Mary Ann Evans? Lopez shines as she portrays the author of "Middlemarch," a woman pretending to a man in order to try and be taken more seriously. As funny as it is within the show, it might be more so if it wasn't so tragic.

But those aren't even all the players here! Sarah Grace Hart, also one of the show's producers, plays an Emily Dickinson so often forgotten that in the the opening credits, her placecard is removed from the table rather than placed upon it. Tara Perry shows up as Louisa May Allcott, Margie Mintz appears as Agatha Christie, Whitney Avalon plays Mary Shelley, and Oscar Wilde is played by Tom DeTrinis.

Additionally, Clayton Snyder, who once played Ethan Craft in the popular Disney show, "Lizzie McGuire," portrays Fyodor Dostoyevsky, who is stereotyped as a heavy drinker of vodka wearing furs. One of my few criticisms is of their treatment of his character; while they do poke fun at everyone, their treatment of Dostoyevsky seems to do less with the author and more to do with stereotypes of Russians in general. Although fans of "Crime and Punishment" should appreciate a particular nod to the book given at the end of episode 4/beginning of episode 5.

Then you have Blake Silver as the effeminate inventor H.G. Wells, who just might have a thing going with Lenore, although some fans have started shipping what they call HemingWells. Lastly of all the characters who have appeared so far is Eddie Dantes, Annabel Lee's boyfriend, played by Ryan W. Garcia. His appearance is, of course, devastating to Poe. Remember that poem about her? Poe is pretty true to the sentiments expressed there.

The story starts with the cast arriving and sitting down to dinner. Soup is served, appearing at the snap of Lenore's fingers. Poe is in the middle of trying to explain the murder mystery game they will be playing that evening when the lights go out and (gasp) an actual murder occurs. Instead of having a good time, they have to try to figure out who the murderer is as the authors are picked off, one by one.

I won't say anything else, for fear of exposing too much of the plot. Just know that if you are a fan of witty dialogue, fantastic portrayals of literary figures, and murder mysteries, this is the series for you. You'll end each week's episode wishing they were longer and wondering how you'll ever last the week. Don't want to have to wait? The series should be done soon: with only ten episodes, it should wrap up October 24th. You can binge it just in time for Halloween.

New episodes appear every Monday here, so catch up, tune in, and make your choice, if you please: Wellenore or Hemingwells.