On 'Harry Potter And The Cursed Child'
Odyssey
CurrentlySwoonLifestyleHealth & WellnessStudent LifeContent InspirationEntertainmentPolitics and ActivismSportsAdulting
About usAdvertiseTermsPrivacyDMCAContact us
® 2023 ODYSSEY
Welcome back
Sign in to comment to your favorite stories, participate in your community and interact with your friends
or
LOG IN WITH FACEBOOK
No account? Create one
Start writing a post
Entertainment

On 'Harry Potter And The Cursed Child'

You're never too old to return to Hogwarts. 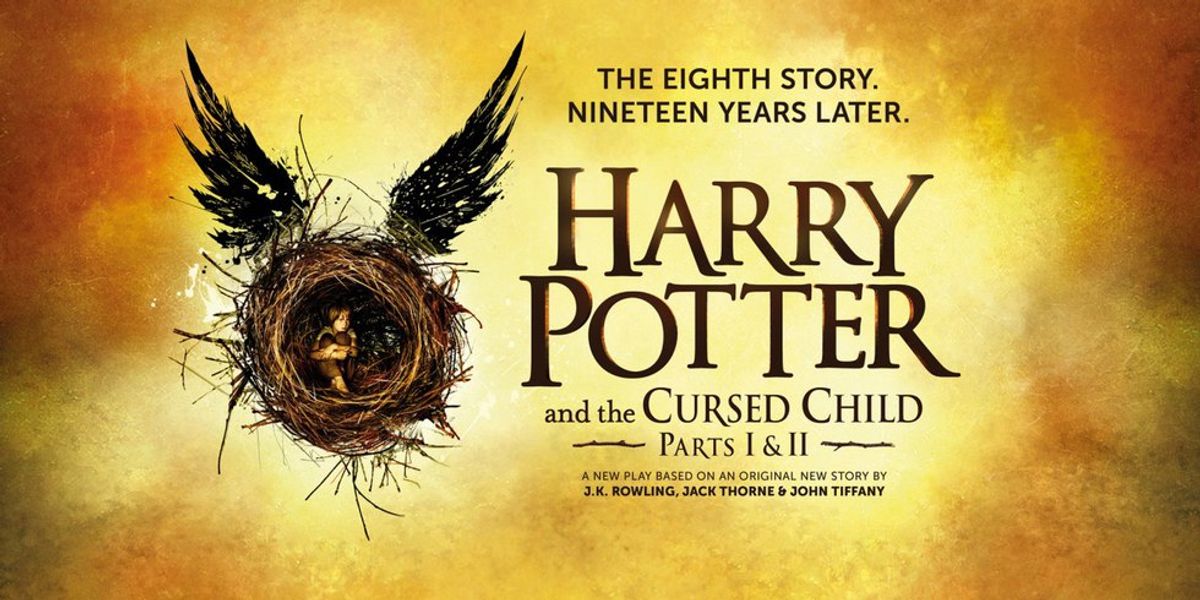 The hold that Harry Potter has on our generation is unreal. I have never once experienced something like this. Sure, there was a bit of pandemonium for Twilight and a little for the Divergent series, but Harry Potter owns this generation. J.K. Rowling's magical wizarding world has stolen the hearts of children and adults alike and continues to pull in this new generation, the generation of the kids who weren't even a sparkle in their father's eye when the books first came out.

As time has gone on we all began to wonder if another Harry Potter story would grace the shelves of bookstores ever again. Many people, myself included, had long given up on a sequel to this fabulous series. Then, it happened.

J.K. Rowling, along with Jack Thorne, and John Tiffany released "Harry Potter and the Cursed Child" and we traveled in a time machine back to the late 90s/early 2000s. However, this time we got to follow the story of Harry Potter's son, Albus.

This book was 100 percent worth the wait. Not only do you get to experience the adult versions of Harry, Hermione, and Ron, you also get to see how they really haven't changed at all. In fact, they're still dealing with difficult challenges... These days it's mostly just getting their kids to listen to them. Draco Malfoy makes an appearance and his son, Scorpius, will steal your heart.

I loved reading this book because it kept me engaged. If the characters had been any different than they were in the first seven books, I'd put the book down and give up. Obviously, this was not the case. Ron is still goofy, Hermione is still a genius, and Harry is still worrying about He-Who-Must-Not-Be-Named. Most importantly, he has reason to be worried. When his infamous scar begins to hurt him again, a red flag goes up for everyone.

On the other side of things, Albus Potter is going through his rebellious teenage years. He doesn't see eye to eye with his father and feels like he doesn't belong. Don't we all feel like that sometimes? Angsty teens everywhere can relate to this storyline. Along with his best friend, Scorpius Malfoy, he gets into some trouble with dark magic and puts the world as he knows it at stake.

This new story from Rowling includes everything the first seven did -- loyal friends, crazy adventures, and tons of magic. Potterheads, if you haven't already, go out to your local bookstore and purchase this gem. You won't regret it and, honestly, if you would pass up the opportunity to venture back into this magical world you are out of your mind.

Nicole Marie Nigro
Individual Creator
9212
c1.staticflickr.com
Where to start...... Let me start with the cliche that life throws us curveballs and what we do with it is what counts.