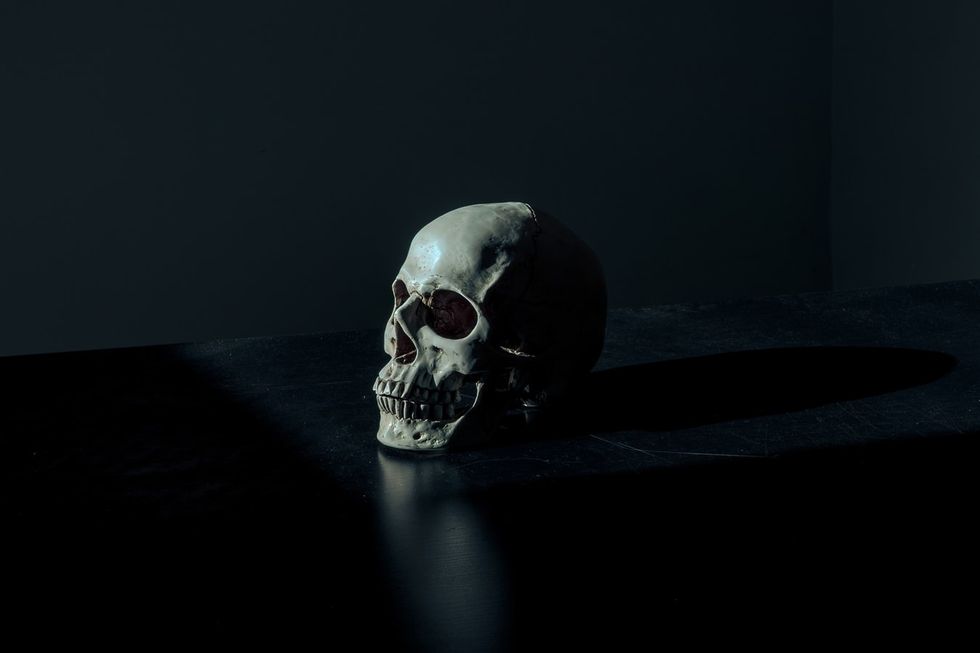 Death waits for none. This is what occurs in the mind of Hale as he stands beside the grave, staring down the empty void that is to be filled with the body. Six feet down, a couple of inches across, surrounded by dirt and cockroaches, worms and beetles, insects that will rip apart the last of what is left of the body, until it is consumed by the earth. Will she burp it out after the gory devouring of its remains? Hale wonders about this.

A crow shrieks sporadically behind him, as if nagging, pulling at his sleeve, again and again, turning his blood cold.

It began raining. No — not rain. It is the static of the bickering that he could barely hear, of two old women who hunch together and point with their wiry, dusty fingers at the funeral scene. Their eyes are wide and curious, juxtaposing their wrinkles and tiredness as seen on their faces.

As they speak, it is as if there is a fly buzzing continuously in Hale's ear. He attempts to ignore the untimely judgment expressed by the women, yet can't help but overhear their conversation.

"…was quite young…" The first one says.

"…A bit fairer than the rest, no?" The second one suggests.

The first one replies, "Yes, quite fair, and very dear as well. Took care of the whole family. After the eldest ran away with that infidel, I could hardly imagine how the family could maintain…."

"…Yes, I have been reading the tabloids. She had taken her life after the marriage — just six months in! How odd…"

"Although there is a curse in that family I hear… of course, I would never believe it myself…" The first one begins to sound exasperated.

"A curse?" Curiosity absolutely consumes the second one.

"Yes — those without blessed nuptials in the Downing family -- often the parties in the relationship are left dead. Quite gruesome, I may say."

"Anyways, he was a sweet boy. It's a shame. Nothing like his older brother. If only he had, himself, loved one that the family could love as well."

"You are suggesting that his death is a result of this curse?"

Hale scratches at his neck. It feels like there is something stuck in it, swallowing his breath. He wants to jump down, into the grave, and join death rather than hear the conversation between the two women. Then he shakes his head at himself -- he is being quite the drama queen.

He turns around to see the women face to face, but they hardly look up, as if they do not see him. He squints his eyes and scowls. Then he begins yelling unintelligible words and a series of explicit phrases. The women, still drunk in the gossip amongst themselves, never dare to look up.

"...So no one can possibly be blamed for his death but himself..."

"Susan, there is no other explanation."

"Hale did not swallow those pills because his family did not accept his wife. That is ridiculous."

Hale blinks. Then he looks down to his hands, looking paler than usual, and tries to feel his body. Then he thinks, as he lets his hands wander around to try to feel something solid, what pills he had taken.

He curses again as he remembers the ones on the counter before dinner. Those were not liquid Advil.