Get ready for some serious perspective gaining. 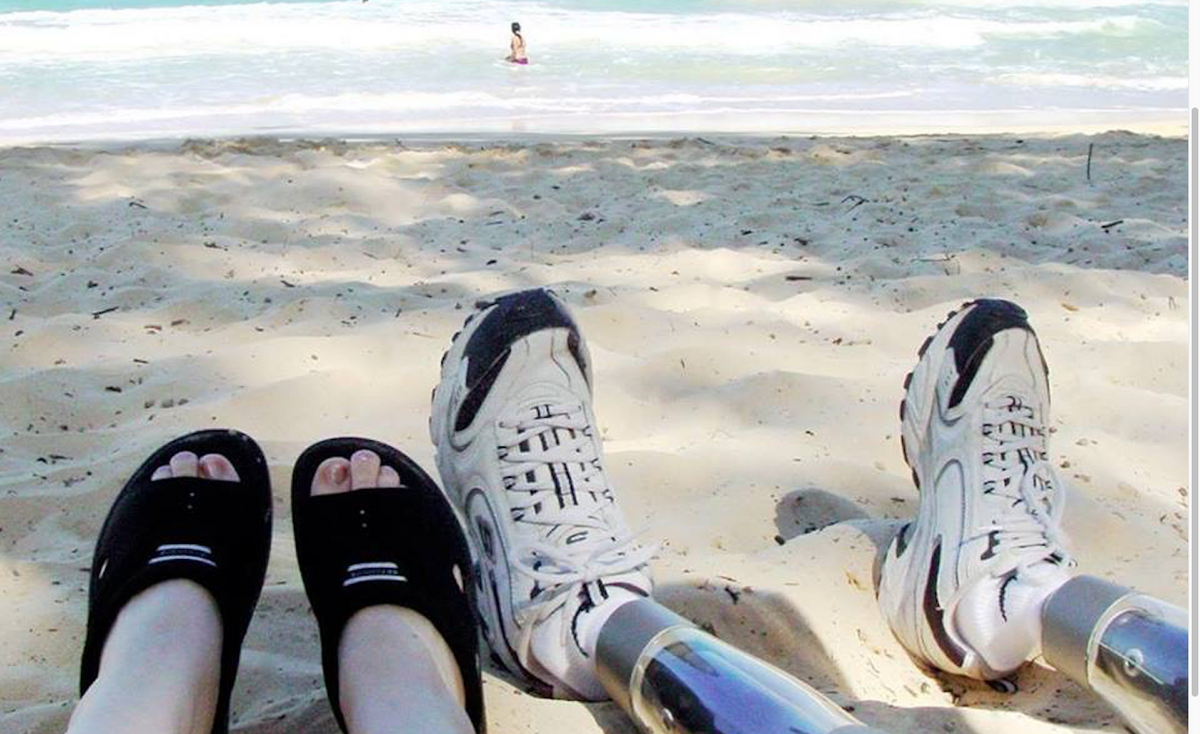 On the night of April 29, 2007, while an active duty Air Force Captain, David Berling was in a private plane crash in Los Angeles, California. He was the only person on board. LA County firefighters, paramedics, and sheriff's deputies arrived at the scene within minutes and were surprised to find David alive. The team stabilized David as he hung upside-down in his aircraft and prayed for the best when an ambulance whisked him away to Harbor-UCLA Medical Center. Ultimately, David suffered multiple injuries requiring the amputations of both legs above the knee. Two months and 28 surgeries later, David was finally able to return home.

That's the official story but believe me, there is so much more there. What's missing from that telling is my aunt finding out and families racing out to LA for support. More humorously, the family finding out that Missy and David were actually married for about a year before the accident but never told anyone.

David learned to walk, to run, to drive, to do nearly everything he used to do. As everyone in my family knows, David doesn't just do things, he does things better than everyone else and he truly has proven that time and time again with his determination and his amazing humor about it all. Not many people can laugh about a situation like this, but Missy and David find the humor and the good in everything, including this.

I was only 9 when the accident happened, but the details are burned into my mind because Missy and David, along with David's father Kim, wrote a book, "Just Living the Dream: No Way Out But Through" in 2013. I read it all in one day and cried and laughed all over again.

David asked if he made the news, and we told him the story was all over the news in California the first day.
"I guess I'm a pretty cool guy," he said.
"Yes, David, the coolest."
-Just Living the Dream

David has spoken at many schools, hospitals and meetings, sharing his story in the hopes that it will help someone else, I have no doubt that it has.

David took up handcycling and quickly began excelling in the sport. Remember when I said David does everything better than anyone else? That was no joke.

Let me tell you something, Life loves cruel irony.

On January 17th, 2017, while training on his handcycle, David was hit by a car, breaking 8 ribs in the process. When I heard about this and that he was going to be okay, I couldn't help but laugh. How do I explain this to my friends at college. "Okay to start, just so you know, my uncle is okay, but he was in a plane crash 10 years ago and has no legs and he was just hit by a car."

Do you understand how crazy that sounds? The answer is very, very crazy.

Well, Life, the jokes on you, if a plane can't stop David, a car sure as hell won't. And it didn't. David (figuratively) brushed the dirt off and (literally) got back on the bike.

Missy and David have been all over the country for cycling races and everyone was just waiting for the latest time to be announced, always hoping for a record. They've gone to Begium and Italy to compete and it's honestly the most inspiring thing I have ever witnessed.

Ready for the best part?

David was just selected to be a part of the US Paralympics Cycling team and is going to the World Championships in South Africa later this summer!

2007- A normal guy, two above the knee amputations and multiple surgeries and lots of uncertainty ahead.

2017- A normal guy, two above the knee amputations, hit by car and Paralympian.

If that isn't perspective setting freaking inspiration, I don't know what is.

For more information about Captain David Berling and his story, visit https://www.facebook.com/TheBerlingDream/

Check out the book, discover the story, watch as he kicks ass at life and in the World Championships.

I'm The Girl Without A 'Friend Group'